The 2019 Combine is in the books, and I figured I'd take a look at the West Virginia representation to see how each of the guys performed. I'll add in my grades for each player and where I think, at least for right now, each player stands come draft day. To help grade each player, a couple important data sets I'll use include each player's RAS (relative athletic score) and spider graphs courtesy of MockDraftable.

First up, I'll start with one of the players that didn't actually work out at the combine: David Long. The only thing Long did this weekend was the bench press, where he hit 18 reps at 225 pounds, so it is tough to acutely grade him in this writeup. That bench press figure would put Long near the bottom in terms of strength (T-19th out of 28). I presume he'll have a private workout or use WVU's pro day to show off for scouts. Until then, not much to say about Long that hasn't already been said.

Yodny is the second player that chose to not participate heavily in the combine. He did notably put up 32 reps in the bench press, which put him 4th out of all the offensive linemen at the Combine. It also puts him in the 92nd percentile all-time, but we'll have to wait until his pro day activities to get a better judge as to how Cajuste rates, athletically speaking. He's plenty strong enough. Most of the questions about Cajuste will surround his footwork and speed, and whether he has to move inside to guard at the next level. He's got the length to play tackle; I'm not sure if he's athletic enough for it.

Next, we have the former Heisman hopeful in Will Grier. Truthfully, the combine wasn't all that important for Grier. Most of what we know about him is on tape. However, since he did participate after all, we might as well dive into his performance. 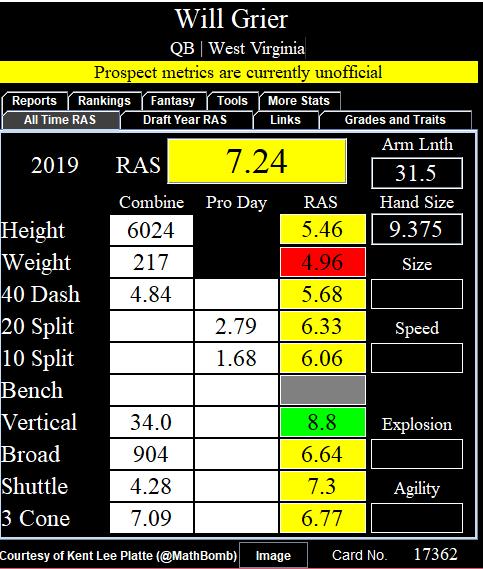 Grier put up an RAS score of 7.24. Relative to the rest of this QB draft class at the Combine, Grier sits comfortably in the middle, 8th out of 15 that worked out (Kyler Murray, of course, did nothing). His 40-yard dash and vertical jump were more than adequate for what he'll be tasked with in the NFL. Perhaps the biggest surprise was Haskins coming out on the bottom. Though he projects as a pocket-passer, he put up somewhat surprisingly low scores.

As for Grier, the actual numbers are largely unimportant. What's most crucial for him are his arm and head attributes. During the passing drills, Will was hit or miss, for the most part. As we saw with his long ball, there were times he lacked the necessary touch to hit his guy in stride. He did display skill and velocity on the short-to-intermediate throws.

Unfortunately, I don't have enough information to go much beyond this in assessing Grier on his combine. I don't have access to his Wonderlic scores or his interviews with teams. Those aspects of his process are perhaps more important than anything else in determining where he'll get drafted.

Based on what we've seen the last two years, I think Grier will bring very mixed opinions. Truthfully, I believe his ceiling in the NFL is as a backup, but at least that should land him some kind of job.

The bruising tight end for West Virginia, like Yodny, put up spectacular numbers in the bench press. The 24 reps he managed was 1st among eligible tight ends. Historically, that number is still pretty decent (T-39th since 2000). His other numbers, however, are considerably less impressive, which shouldn't surprise anyone. Wesco was the quintessential blue-collar worker, not an athletic pass catcher. The combine numbers bear that out. 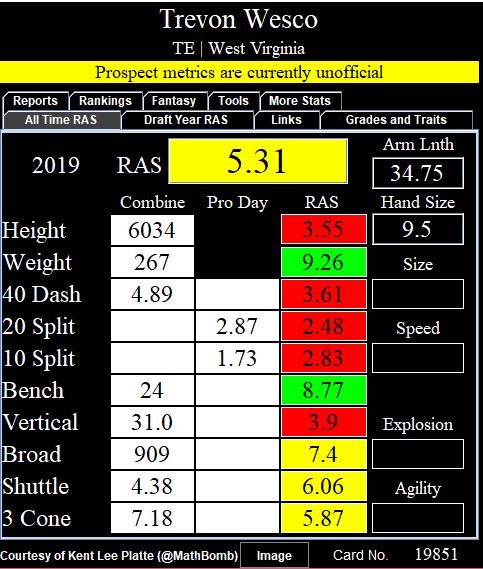 Wesco's score was barely above average at 5.31. At the next level, Wesco isn't going to be tasked in spreading the field like your Travis Kelce's or Zach Ertz's. Odds seem fair that his game may be best suited as a third tight end or fullback, brought in as a specialist to help clear the way. His numbers, while not astounding, are comparable to a similarly situated tight end drafted in the 4th round of last year's draft, Will Dissly. Dissly only managed an RAS of 3.77, and likewise lacked the production in college, but his skills as an adept blocker saw him taken early on Day 3.

This isn't to say Wesco is quite as strong a blocker as Dissly. I'm not sure that he is, but his other numbers, including size, are all fairly comparable. He has a bit less short-area quickness, but Wesco is stronger, has longer arms, and a bit more explosion.

Trevon doesn't really blow you away with anything he does, but he seems steady, reliable, and powerful enough as a blocker that he could develop a role in the NFL. Perhaps he's even a tad underrated. At least, in the right offense, he has enough juice to give you whatever you need. With fewer and fewer tight ends being accomplished blockers at the collegiate level, it does help Trevon stand out a bit. If he doesn't end up drafted late, he'll certainly be a priority free agent.

Gary had himself a day. Honestly, of the two West Virginia receivers likely to get selected, I think Jennings has the better shot in the long-term. Out of all the receivers at the Combine, only nine players managed a better RAS than Jennings. 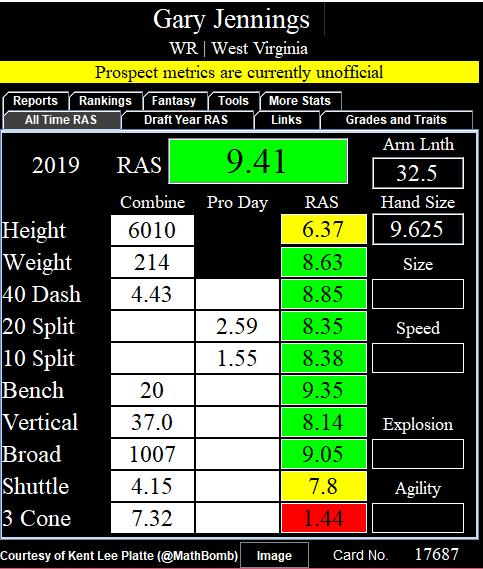 At 10th overall in the receiver group, he showed plenty of athleticism to boost his draft stock. Any score over 9.0 is considered elite, or close to it, and Jennings mostly looks the part. He's right there with N'Keal Harry (9.44), who is likely to be drafted in the first or second round. Now, obviously Harry is the more accomplished receiver and the stronger overall prospect, but Jennings nearly had back-to-back 1,000 yard seasons. He fell just short this past year with 917 yards. In 2017, he had 97 receptions. There's plenty of production to entice NFL teams.

While at WVU, Gary has shown steady hands and a fair amount of top-end speed. His 3-cone time is a little concerning. You'd like to see a bit more short-area quickness out of a potential slot receiver, but he still managed a better time than D.K. Metcalf, a freak of a prospect that is quickly rising up boards (though Metcalf is almost certainly a deep threat on the outside).

Aside from that, Gary demonstrated plenty of strength with his 20 reps. Perhaps his toughness is what he's most known for in the end. He's got the power and frame to prove it. He compares well to Martavis Bryant, who had a nice NFL career going for himself until he got suspended, then things went downhill. Bryant was a 4th-round pick, and I think Jennings has similar potential. In a somewhat weaker receiving class, especially, it wouldn't surprise me to hear his name called as early as Day 2.

Finally, we have David Sills, a player that mostly outshined Jennings while at WVU, but will draw differing emotions as a prospect. I've gotten the sense over the last few months that I am lower on Sills than some other folks, perhaps most others. As I previously stated, I like Jennings as the better NFL prospect. That said, Sills did almost nothing wrong during his Combine performance. In fact, he even fared a bit better than I expected. 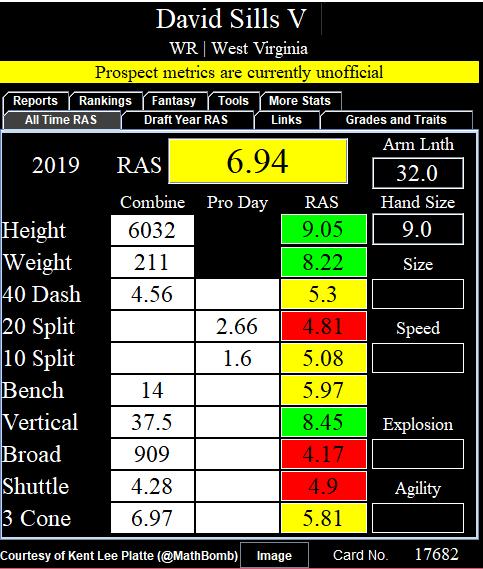 Sills' RAS of 6.94 is not going to wow anyone, but it is firmly above average. Truthfully, we had a general sense that Sills never possessed explosive athleticism. He did, however, hit the pre-Combine targets that I had pinned for him. He jumped higher than 36" (37.5"), and he ran faster than 4.6 (4.56), which I honestly didn't expect. His game speed seemed decent enough, but come the NFL, "decent enough" doesn't have the same kind of impact.

Sills' biggest problem, in my mind, is his lack of physicality. At the NFL, plenty of corners play press-man and grab on -- even if it's technically illegal -- and Sills will have to learn how to counter that with his own brand of toughness. While he clearly has the leaps and height combination to be a redzone target or jump-ball threat, there were plenty of times where he simply didn't fight once in the air. That's a problem for someone that doesn't have breakaway speed. He also suffered from lapses in concentration that led to ill-timed drops.

Ultimately, though, his speed is good enough. As one example, DeAndre Hopkins ran a 4.57 at the Combine and has competed just fine in the big leagues. Still, Sills is more-or-less average in most athletic categories, so he'll need to do more at the next level to stand out. As of now, there aren't many strong comparables that have gone on to have lengthy NFL careers.

He mostly stood out thanks to some gaudy touchdown numbers. He and Grier had a special chemistry. I'm not especially convinced he'll be a great NFL product. There's definitely potential there, he's still plenty raw, and perhaps in the right role with the right coaching, Sills can produce. Due to the nature of him being a project, however, I ultimately wouldn't call his name before Day 3.