When I started going to school in Morgantown, what's now Milan Puskar Stadium was still being referred to as "New Mountaineer Field." Behind the end zones were grassy slopes leading to the main gate on the north end and what used to be called "The Facilities Building" on the south.

The scoreboard just beyond the entrance was probably not much different from one you'd find at a good-sized high school: score, quarter, time, down and distance were flanked by a couple of marquee advertisements from high-dollar sponsors and topped by a public address system. It was pretty basic stuff. 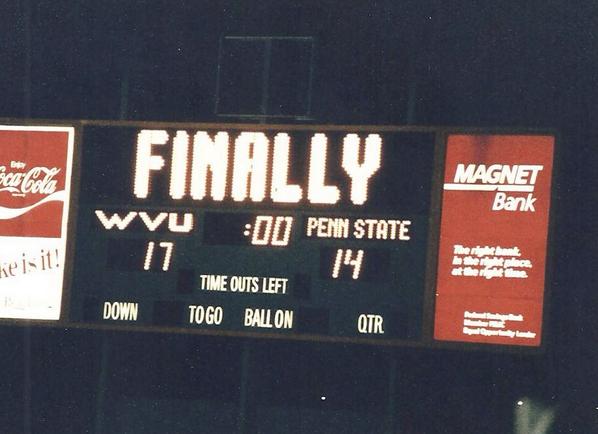 By the time the big Penn State game rolled around in 1984, there was a fancier board that could flash messages and Atari-like animations. It was either this board or the next upgrade that would on occasion feature short video replays that must have been so taxing for the system that they were rarely employed. Still, that was special stuff for the home crowd, a taste of big-time football from little old West Virginia U.

Fast forward about 30 years to official news this week that, in addition to its existing 23-by-85-foot video board over the south end zone, a new, 37-by-92-foot board will be erected over the north by the time the 2017 home slate begins in August.

WVU athletics director Shane Lyons says he wants to "enhance the fan experience" and that it will not only "look great at the stadium, but will add another dimension to our game day entertainment." That's what you'd expect to hear when there's a facilities upgrade.

But in an interview earlier this month with Mike Casazza, Lyons also said the bigger board was part of WVU sports' efforts to offer something to compete with the comforts of the home theater experience, explaining that "you can’t replicate at home the sound and feel and all that of the stadium."

I know a guy from Pittsburgh who'd rather sit at home, cozy and warm, in front of his big screen rather than freeze to death at Heinz Field watching the Steelers. Given his stat knowledge and fierce loyalties across multiple sports, I can't call into question his bona fides as a fan; he'd just rather be comfortable while he watches his favorite teams, which I can respect. It's folks like this, though, that some say are helping put a damper on football attendance nationwide. 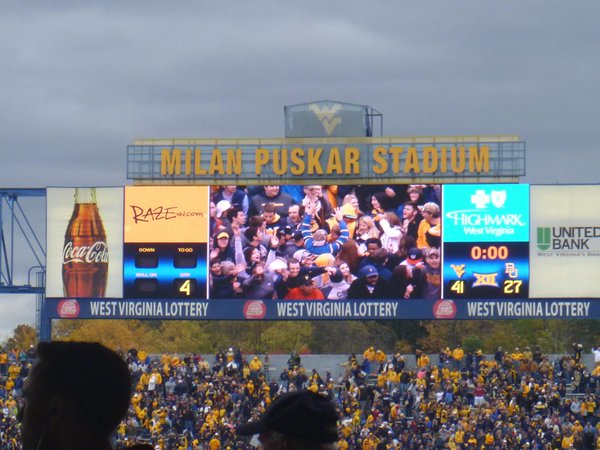 As a family man of modest means, my home theater experience consists of a 32-inch flat screen television hooked up to a pair of computer speakers, so an afternoon at Mountaineer Field still trumps what I'd get in my humble abode. But, frankly, I've yet to sit in front of any person's TV feeling it rivals a live-game environment, what with all the sights and sounds and electricity of a fall day in Touchdown City.

Lyons expects the new board itself will lead to a bump in attendance if for no other reason than the sheer novelty of this electronic behemoth, which would be bigger than half the screens in the Big 12 and right around the top 25 in the nation.

As a person who appreciates spectacle, I'll have to say I'm looking forward to seeing it. Just as importantly, the other 60,000 fans in the stadium will not only get to watch players' images that are several stories high, they'll get used to it as part of the regular game day experience.

I was lucky enough (?) to attend the Sugar Bowl in New Orleans when the Mountaineers had their second undefeated season. Playing in the Louisiana Superdown was heady stuff for the Old Gold and Blue faithful who made the trek to the Big Easy. Maybe it was a little too heady.

Sitting in an NFL stadium with the latest and greatest video amenities, I had the sense that the eyes of the WVU fans were trained less on the field of play as on the big screens showing replays, transfixed like deer in the headlights. It felt like our attentions were divided and that the fans' focus and energy were being drained by the shiny objects high above the stands.

Sure, QB Darren Studstill getting his clock cleaned had something to do with the team's performance, but the crowd that I thought helped will this squad to play above its heads through 11 games just wasn't 100-percent into this one.

I'm of the mind that having a fanbase accustomed to professional-grade amenities like jumbotrons and ribbon boards can only help acclimate it to big-time programs and big-league venues. This way, fans are less shocked and awed by the pretty lights and deafening sound and are more hard-wired to block them out as distractors to their support away from home.

But my greatest appreciation of this new attraction after a good look at the rendering WVU provided was probably also the nerdiest: This $4 million technological marvel was going to go a long way to help with aesthetics. 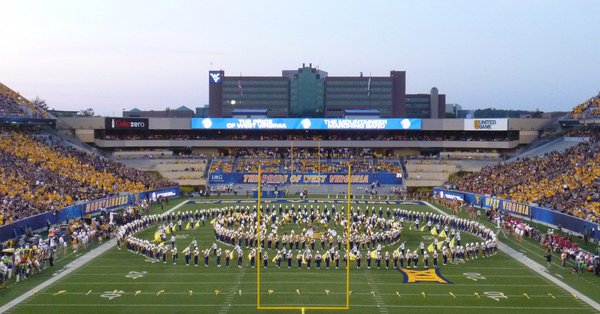 For the better part of two decades, I've loved the way the east and west stands nicely framed Ruby Memorial Hospital in TV shots from the south end zone. The symmetry of stadium was continued in that of the hospital entrance in a way that was visually appealing.

As glad I've been to see the medical center's expansion with the opening of its new wing, I was a little bummed that the view was no longer balanced. Sure, we've got more beds, but, dang it, now everything's lopsided. The new video board would appear to mitigate that by simply, um, covering things up.

Minus the loss of the vertical provided by Ruby's tall, windowed atrium, all you've got is a nice, Flying WV logo with the simply stated "WVU Medicine" on the new east tower, nicely offset from the big, obscuring screen. Out of sight, out of mind.

All this having been said, of course, the best improvement to that view in the board's inaugural season would be a regular stream of touchdown replays courtesy of Messrs. Grier, Sills, Crawford and McKoy on its big, beautiful display. That would definitely enhance this fan's experience.