The LOL Board Is Not Making Fun Of Towson

Picking on them would be like rejecting a five year old's layup shot.

Share All sharing options for: The LOL Board Is Not Making Fun Of Towson

Let's face it. Over the years I've demonstrated a willingness to take any enemy of WVU and spoof them in an unfaltering way. Being in the Big East with John Marinatto as commissioner was like having an ace up my sleeve. Slow news week? John Marinatto gif. Underwhelming opponent? John Marinatto gif. He was photogenic in the funniest of ways.

It really is sad in a selfish way to not have a lot of our traditional rivals on the schedule anymore. Because no matter what, Pitt was always easy. No matter which of their four football coaches in three years was in charge, there was always fun to be had.

Of course lately there's been an enemy within. Despite many failed legal attacks, John Raese has continued to do all in his power to try to bring down the current administration and the partnership with WVU and IMG. But much like president Snow is soon to find out that nothing lasts forever, Raese will hopefully realize that nothing he does is going to change the end result. I'm hopeful we are going to be able to put all that in the rear view mirror and just concentrate on the stuff on the field. But just in case... 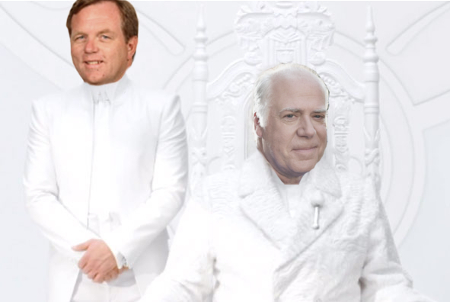 I think I could go on with this for a good while if I really wanted. But in the interest of brevity, the point I'm trying to make is that I don't want to and can't think of a good reason to pick on Towson. I want us to beat them soundly, for sure. But that has more to do with my desire to see the Mountaineers summon as much intensity for this game as they did for Alabama. Because then I would feel more secure in saying that the team has turned the corner. So I won't pick on Towson, but I can't wait to play Maryland next week!