Join in on the fun! Even if you're new, there's plenty of time and chances to catch up.We're giving away a WVU Nike T-shirt at the end of the season to the overall winner.

Week one of the Gauntlet is in the books. Because it's a cumulative score game, you can always jump in late and catch up. Our leader after one week is mn-eer with 20 correct. Here are the top eleven (with ties): 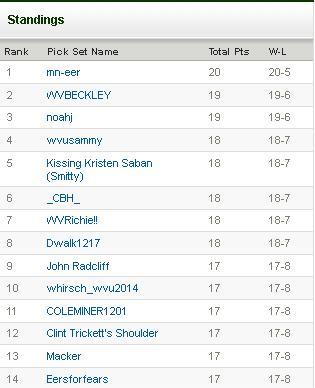 We have 25 games to pick this week, starting with games on Friday night at 7pm. Deadline for each pick is 5 minutes before kickoff.

"I respectfully decline this opportunity to give a prediction."

After an impressive outing against Alabama last weekend in Atlanta, Morgantown should be rocking for this year's home opener against Towson under the lights at Milan Puskar Stadium. Senior Clint Trickett should be in line to log his third straight game with a career-high for passing yards this weekend after throwing for 356 yards against Iowa State in last season's finale and 365 yards against Alabama last Saturday.

With West Virginia likely to build a large lead over Towson, the Mountaineers will have an opportunity to work out any lingering kinks ahead of next week's game at Maryland and the eventual Big 12 Conference play this season.

West Virginia's offense has its way with the Towson Tigers but the defense struggles while stopping Towson just enough times to put the Mountaineers into the win column for the first time this season. Trickett throws for 300 yards and Shell rushes for 128 yards and two TD's. That probably boosts him into the first spot on the RB's depth chart.

I fear this is going to be a game WVU jumps out to a 42-3 lead by halftime and cruises.

The offense is playing better, with more competency and poise. The defense is still trying to find itself a bit, but is still much improved. We put up points and then let off the gas.

West Virginia's offense continues to build from the momentum that it built against the Crimson Tide, and the pass rush actually gets to the quarterback a few times in this one. The Mountaineers cruise to a win over the Tigers and move on to a huge barometer game against Maryland.

A night game to start the home schedule in Morgantown will have the fans and team bursting at the seams with anticipation. The improvement we saw on offense last week will continue as I'm sure the receivers spent extra time this week with the JUGS machine catching passes. The defense will look stout and we may see some newer faces get some playing time in the second half.

Rumor has it that practice has looked better this week than leading up to Alabama. The possibility of an emotional let down is there and something Dana needs to be mindful of. However, the Mountaineers come out excited for the home opener, vengeful from losing last week, and take their frustration out on Towson. A late touchdown from Towson makes this game look closer than it actually is.

WVU goes off. After an off-season spent conditioning themselves physically and mentally to beat Alabama the Mountaineers fell short. A night game in Morgantown means the fans will be ready further fueling an already jacked up WVU team. Shell pops off, WVU scores at will, and the game is over at half. The beatdown is a cathartic win for both the players and the fanbase. The starters get some rest in the second half and start getting ready for payback against the Terrapins.

Towson lost last week to a Central Connecticut squad that went 4-8 last year. Clearly this isn't the same Towson team that made it to the FCS final last season. Towson allowed 273 yards through the air last week, and the Tigers won't stop the WVU rush either...they gave up 192 on the ground. The Mountaineers offense should click along fine this week, and I look for the defense to cut its yards per play allowed down significantly. Towson will get an early FG, and a late garbage touchdown, and in between the Mountaineers will sandwich nine or 10 scores.

Playing under the lights eliminates any chance of the Mountaineers coming out lackadaisical in this one. Hopefully the fourth quarter becomes a time for the second string to play and WVU can find reliable depth at WR.

After a hard fought battle against the Crimson Tide and ACC officiating crew, WVU comes out with a vengeance against Towson. Clint Trickett continues to impress and racks up 400 yards before halftime connecting with White numerous times down field. It looks like a shutout is in the making, but the third string defense allows a long run toward the end of the game to set up a Towson field goal.

Buckle up folks, this one will be fun to watch.

The Mountaineers come out eager to build on a solid performance last week and notch one in the win column. Alford and White both score again as Clint Trickett puts on a solid if not head-turning performance, passing for right around 300 yards. WVU puts a lot of effort into developing the run game as Rushel Shell goes for 100 yards on just 16 carries. Garrison and Dreamius see more work than they did against the Tide and most importantly the WVU O shows us the red zone struggles agains Alabama were more a function of the opponent than lingering leftovers from 2013. The D is solid, forcing a pair of turovers and WVU never trails.

The Mountaineers score on 10 out of 14 possessions in this blowout that is over midway thru the second quarter. WVU is successful on the ground and in the air. Shell runs for 150+ yards, Trickett throws for nearly 300 yards, and receivers minimize mistakes made in Atlanta. Towson, which struggled with a new quarterback in its loss at home to Central Connecticut, will try to establish a run game. WVU stuffs the Tiger's futile attempt and forces Towson to commit three turnovers. Holgorsen rests his starters in the fourth quarter, allowing backups to gain valuable experience.