Is this a little late? Yup. That's what an extended Labor Day trip to ATL will do to you.

Share All sharing options for: Recap: Game One. Best Loss Ever. Eers Lose.

There was a lot said in the offseason about the Alabama Crimson Tide slipping from national dominance and into the pack. The real test, however, was to come Week 4 against Florida while the Tide beat up on a few cupcakes. If there is one word I would not use to describe Dana Holgorsen, it would be cupcake.

The 2014 West Virginia Mountaineers are out right embarrassed with how 2013 ended up. A record of 4-8 with including a loss to Kansas was a shocking underachievement for all the talent that was on the roster. However, with a clean bill of hair health for Clint Trickett and an offseason to polish up the offense, the Mountaineers were ready for the Tide.

I don't think anything is cooler than the pride of West Virginia pic.twitter.com/hnub5yKiu2

Proud to be a member of the Mountaineer Nation! pic.twitter.com/JwWvyedCPG

Alabama won the toss and elected to kick. Not a huge surprise for the Tide to choose their defense first. What came next might have been. WVU moved the ball well with Rushel Shell and Kevin White broke loose for 29 after Bradley Sylve slipped. West Virginia never saw a third down until at the ALA 22. The Mountaineers got within three yards of paydirt to start the game, but had to settle for three. Huge statement for West Virginia to put points on the board on the first drive of the season. After 4:02 of game time, WVU had successfully accomplished what Michigan and Virginia Tech could not in the last two Chick-fil-A Kickoff Games: get a lead.

After the kickoff, the Tide gave the Mountaineers their first dose of Amari Cooper. The Preseason All-American is a NFL lock and looked like it. While Blake Sims looked fresh for the first couple tosses, the drive stalled with him looking shaky and throwing to Amari Cooper's knees. Bama settled for a field goal and WVU was tied with the #2 team in the land. PAWL THE TIDE AIN'T SCORIN TOUCHDOWNS ON THE BIG 12 DEFENSE FIRE KIFFIN.

Again, the Mountaineers come out firing. With precision passing from Clint Trickett to Wendell Smallwood, Jordan Thompson, and Mario Alford, West Virginia was in business in Tide territory. However, the drive stalls and ends with Pankey getting beat and giving up a sack that effectively takes the ball out of field goal range. Boomstache punts and Bama gets pinned back to their own 5 with an illegal blocking penalty.

The poor field position start didn't affect Alabama too much. Cooper bailed them out of a 3rd and 11 and Kiffin continued to pour it on with TJ Yeldon and Derrick Henry. The quarter ended with the Tide methodically moving the ball to midfield. Not quite methodical enough for the head coach, it appeared.

We'd love to know how this conversation went... pic.twitter.com/GPZOBJ05HN

Would the Mountaineers be able to bounce back? Yep... and it only took two minutes. Gadget play to Jordan Thompson gets the ball moving and strikes to Alford and Wellman get West Virginia within striking distance. WVU is legitimately eating up yards against the Crimson Tide defense, then Kevin White finds pay dirt.

I love you, Mountain Lady. All hell breaks loose. We gotta game. 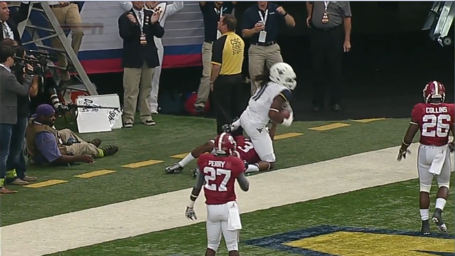 The West Virginia defense rides the wave and holds Alabama to a three and out. Huge. What does the Eer offense do with it? DROP. DROP. PUNT. Missed opportunity. Boomstache pins Bama at their 12 and Sims comes back out to do work.

And by Sims, I mean Amari Cooper. Coop bails the Tide out of a third and long. After a few runs, DeAndrew White reverses the field and breaks loose on another third and long. White is quick, but poor tackling was the true culprit here. The Mountaineer defense fail to get off the field twice on long third downs and give up a TD to TJ Yeldon.

This is about the time when the family behind me was clammering about "that SEC speed." Mario Alford must have heard them.

SIT THE FUCK DOWN. ARE YOU KIDDING ME? ALL CAPS EVERYTHING. THE GEORGIA DOME PLAYED THE TRAIN WHISTLE. CODE KERMIT ACTIVATED.

Bama drove down the field to get a field goal to put them on top going into half time. BAMA 20-17.

BUT WHO CARES? THIS IS AMAZINGGGGGGGG. TAKE A SEAT, PAWWWLLLLLLL.

And with that, Alabama goes up 24-0 over West Virginia at the half. Oops! I hit the Tweet button 1 week early.

Both teams came out sloppy to start the first half. Two penalties a piece on both teams lead to Bama going it on fourth down in WVU territory. The good guys held tall.

Clint Trickett comes out on the field and scrambles for a first down. Next, he throws a jump ball to Kevin White who makes a huge catch for 26 yards to put them at the BAMA 25. Note to Big 12: Kevin White is a monster. Sadly, the Mountaineers get an intentional grounding call including DROPPING a potentially third and long conversion. Even worse, Lambert misses the field goal.

Going down to the #2 team in the country is rough, but West Virginia battled back. Trickett connects with passes to Smallwood, Shell, Thompson, and White to finally get to the BAMA 25. The third down conversion is DROPPED and WVU settles for three. Good to get points... but we needed touchdowns.

Here's the drive that everyone wants to talk about. The Tide come out and hit Cooper for 15. On third and 9, Sims scrambles and gets five before he's pushed out of bounds.

Unsportsmanlike for having the QB run into you.

What a horrendous call by refs against West Va. Gamechanger potentially. Unsportsmanlike?? Ridiculous

Unsportsmanlike conduct: (n.) Not letting Alabama convert on a third down.

I agree that it was an awful call. When you play Alabama, you have to go into it knowing that you're facing 1st and 11 and they are looking at 1st and 9. Not that WVU gave the referees an excuse to throw that flag, but it's still the third quarter. Plenty of time.

That's how the West Virginia offense came out. Trickett hit Alford twice and Thompson for a big gain to get into Bama territory before the quarter ran out.

WVU is within striking distance at the BAMA 30 when Trickett finds Kevin White for 25 yards and a first down and goal. This is where West Virginia has to come out with a TD. Trickett shorts the pass to a wide open Wellman on first down. Second down, Trickett throws to the corner for Kevin White and it's broken up by DB Cyrus Jones. Third down and goal, Orlosky skies the snap over Trickett's head. WVU takes three points when they desperately needed six.

Blake Sims throws an interception, but WVU goes three and out. Bama kicks another field goal and drains some clock.

The Mountaineers go into two-minute drill and never get any traction. Game. Bama-louses.

NO SLEEP TIL TOWSON