The Mountaineers and Milan Puskar Stadium were super-charged to face the #4 Oklahoma Sooners on Saturday night on national television. The Sooners, however, were ready for the impending dogfight.

This game is the reason why West Virginia is happy to be in the Big 12. Not specifically this one, but the circumstance. #4 Oklahoma, at night, nationally televised with legitimate analysis on College GameDay. This kind of game would be the de-facto National Championship for the Big East-era Mountaineers, but this is a sign of things to come with it being the conference opener. The 7:30PM EST kick made it so the fan base had plenty of time to prepare for the Sooners and the 61,900 at Milan Puskar Stadium were ready to go. Since West Virginia has joined the Big 12, the matchup against OU has been an absolute dogfight each year.... and this year was no different.

West Virginia won the toss and elected to receive. Sooner LB Eric Striker puts his mark on the game early with a sack to create a long third down conversion for the Mountaineers that proves insurmountable. Each team trades punts with the offenses starting out slow until Oklahoma starts giving the ball to RB Samaje Perine. With a healthy diet of Perine along with medium range passes to WRs KJ Young and Sterling Shepard, the Sooners drive down the field, but stall just outside the Mountaineer redzone. They settle for a field goal.

The Mountaineers try to find WR Mario Alford three times in a row, but only complete one of them and punt it away. Oklahoma is unable to do anything with it. Another punt.

Seriously, this game started slower than hell. Then... it caught fire. With a minute left in the half, Trickett finds Mountaineer Monster WR Kevin White streaking down the field. The good guys find paydirt first.

Scorched. Gus Johnson let us know that's the first points that Oklahoma have given up in the first quarter all season. Not only that, but they go three and out in their next possession. At the end of one, the Mountaineers are leading the #4 team in the nation.

West Virginia started the second quarter with the ball and driving. A few rushes from RB Andrew Buie including a good 17 yard pickup from WR Mario Alford put WVU at midfield, but no further. OU, again, three and out. This is the time to pounce. WVU starting at their own 45 goes to RB Rushel Shell for 6 and Kevin White for 18 to get to the OU 31. This is striking distance for the Mountaineers and Trickett goes for the endzone....... off the hands of Mario Alford. The drive stalls and WVU takes three. The refs call a holding penalty on the initial field goal attempt.... so Lambert just buries it from ten yards farther. Nbd.

Two plays later, the Sooners prove how costly that drop was. QB Trevor Knight finds Shepard for 31 to midfield and Perine rushes for another 38. Inside the ten, Stoops give it to Perine to finish the job. He can't on first and second down. Then..... the trickery.

You're going to beat us that way, Oklahoma? Really? Alabama didn't have to do any of this cute stuff. Whatever. 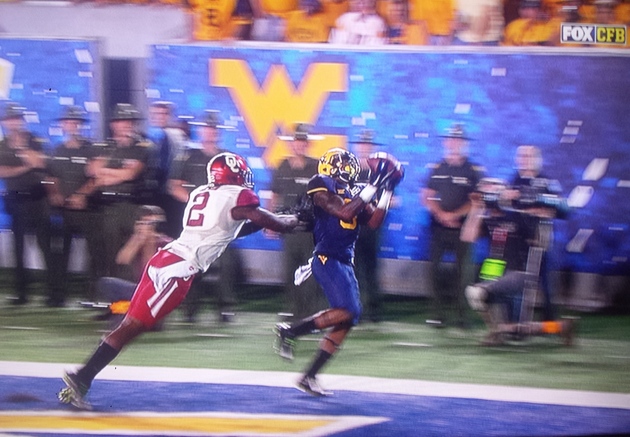 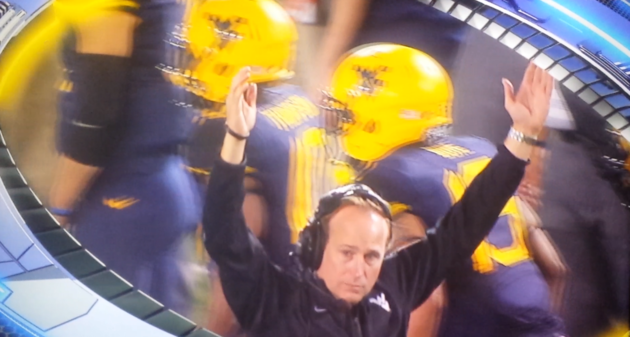 TRAINWHISTLE ME. NO. SUPER MARIO ME.

The Super Mario video on the jumbotron was hilarious. Mario Alford had clearly had his mushrooms today. #WVU

Game on and Oklahoma knows it. Trevor Knight starts firing it around to WR Durron Neal, Young, and even RB Alex Ross out of the backfield. When the Sooners get just beyond midfield, KJ Young gets big yardage on a WR screen, but fumbles out of bounds after Karl Joseph clocks him. Not quite a missed opportunity, but a big enough hit that it bears mentioning. From there, Perine finishes the drive off and punches it in on the goal line with his third attempt.

On the ensuing kickoff, Stoops tries to pull a fast one and goes for an onside kick, but West Virginia recovers. With the short field, the Mountaineers have trouble moving the ball, but are bailed out by pass interference and unnecessary roughness penalties that gives them a first down on the OU 26. RB Rushel Shell runs off tackle for 18 yards and inside the Sooner 10. Two plays later, Shell finds the endzone.

We got ourselves a shootout. Alex Ross, however, takes the fun out of everything.

Dammit. That one hurt. Special teams proves to be a liability yet again. The Mountaineers come out with about a minute left in the half, start to get things moving, then Trickett throws a pick. Half ends there.

The Sooners get the ball coming out of the half and start out motoring. The entire drive goes between Sterling Shepard and Samaje Perine to eventually punch it in on 1st and Goal from the 9. Oklahoma takes their since 3-0.

It is now up to the Mountaineers to keep the shootout going. A few quick strikes to Mario Alford get West Virginia into Sooner territory, but not close enough for Lambert. The Eers punt, but OU goes three and out.

Next time out, WVU gets a big gain from Wendell Smallwood on a third down screen to put the ball into the OU redzone. A holding call on RT Marquis Lucas stalls the drive and the Old Gold and Blue settle for three.

West Virginia need a big stop here to shift the tide of the game. They get it on third down from Wes Tonkery.

Tonkery balled out all game long and it rewarded big time. This put the Mountaineers on the OU 47 to start the drive, prime real estate to get the lead back.

Woof. The worse news is Oklahoma took it right down the field with Alex Ross and finally found paydirt with Samaje Perine.

That was the costliest of turnovers. The quarter ends with WVU getting close to midfield with a defensive pass interference call and a couple Smallwood carries.

While the Mountaineers were driving, a big Kevin White reception is knocked back because of the famous phantom facemask call featured in the RT. That and OU ends up getting a sack fumble. Another turnover, but the Sooners do nothing with it.

With most of the quarter left, the WVU offenses switches to nickel and dime down the field against Oklahoma due to their heavy blitzing. This is proven largely successful by crossing midfield and getting within the OU 37, but a sack on second down is too much from which to recover. WVU goes for it on fourth down and fails. Oklahoma takes the ball and literally gives it to Samaje Perine every play until scoring a touchdown.

Game over. WVU gets a garbage time TD to try to make it interesting, but misses the two-point conversion and the onside kick goes to Oklahoma. Donezo.

NO SLEEP TIL KANSAS