Join in on the fun! Even if you're new, there's plenty of time and chances to catch up.We're giving away a WVU Nike T-shirt at the end of the season to the overall winner. Plus, you can see how the staff thinks Saturday's game will go.

We have three weeks complete and Dwalk1217 has secured the lead all alone, for the time being. Because it's a cumulative score game, you can always jump in late and catch up. Here are the top eleven (with ties): 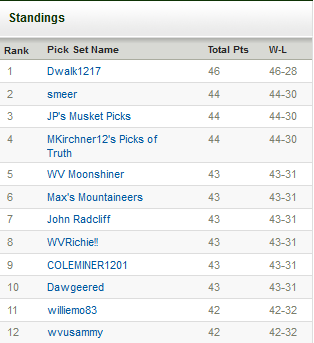 Here is the Week 3 breakdown: 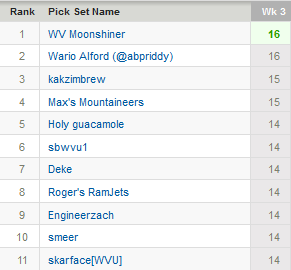 We have 20 games to pick this week, starting with Friday at 8pm. Deadline for each pick is 5 minutes before kickoff. Make sure you at least have your tie breakers in by then.

There is reason for concern be judging by one of the stats to which I pay the most attention. The Sooners are 8th in defensive yards per point (at 26.8), and 18th in offensive yards per point (11). WVU meanwhile is 58th in defensive yppt (15.8) and 82nd in offensive yppt (14.5). This gives us negative differentials in both of those areas. However, our Sagarin schedule strength is 29th to Oklahoma's 86th, we are at home, at night, getting points, and have struggled a bit on offense when in the red zone, so those stats could be a little skewed. WVU has traditionally done well at home, at night, especially against the spread, which, incidentally opened at Oklahoma -12.5 and has slid our way to Oklahoma -7, another good sign I think for a close contest that the Mountaineers could win. I think we cover, but fall short.

As a show of respect, West Virginia fans spend more time pointing out the crying that Randy Edsall has done this week about the 108 plays we ran on his team last week than poking much if any fun at Oklahoma. This leads to Maryland losing to WVU two weeks in a row. A feat only Randy Edsall could accomplish.

This is the biggest game in Morgantown since LSU and ESPN GameDay came to town in 2011. Mountaineer Field will be at fever pitch and the Mountaineers will feed off the excitement. Last time the Sooners came to Morgantown Tavon Austin put on a show for the ages, and while no one will approach that level of insanity this game look for the Trickett, White, and the WVU offense to continue to pop off. The game will go back and forth through three quarters, but look for the battle tested Mountaineers to put it away in the 4th quarter.

As has been the norm, the Mountaineers defense has played tough but still has given up a lot of points to tough opponents. I don't expect much to change against Oklahoma. West Virginia's offense has another great performance keeping the game close and the fans rowdy but the better team walks away with another one in the win column. A loss but by no means a poor loss and the Mountaineers confidence continues to build.

If that trend continues, West Virginia should win this Saturday in Morgantown and again in Norman next season. Clearly, it won't be that easy, but with Clint Trickett's hot streak throwing the ball for Dana Holgorsen, West Virginia will have the firepower with Kevin White, Mario Alford and the stable of running backs to go punch-for-punch with the Oklahoma offense.

After the Daryl Worley situation this week, Tony Gibson's defense will have to able to bend, but not break for West Virginia to knock off the first top five team since the aforementioned Fiesta Bowl win over Oklahoma.

In the aftermath of Saturday's win, West Virginia, who's received scattered votes in both the AP Top 25 and Amway Coaches Poll this season, breaks into the polls at 3-1 for the first time since October 2012 on Sunday.

Once again, I'm posting a score but refraining from commentary.

I humbly withdrawal my opportunity to submit a prediction.

Coming off a dramatic win in College Park, the Mountaineers come out fired up and lay waste to the Oklahoma defense early and avoid a late surge by the Sooners, recapturing the storied magic of a night game at Mountaineer Field. Oklahoma can find no answers to the combinations of Trickett to White and Alford, who all continue their personal climbs in the national conversations. Andrew Buie also continues to impress as he splits carries with Shell. The absence of Worley for the first quarter is barely noticeable as the defense stands strong and holds Oklahoma to 14 points in the first half. WVU wins a big one and jumps into the rankings for the first time in what feels like forever after this one.

Without a doubt, Oklahoma has better talent than the Mountaineers. If they played 10 times, the Sooners may win 8 or 9. But a night game in Morgantown, coming off a huge road win, makes for a special night. I look for the offense to come out on fire and the defense to do just enough to give the Mountaineers their biggest win in a while. Losing Daryl Worley certainly hurts, but Ickey Banks is returning at a time when he's most needed. 7:30 PM Saturday can't come soon enough.

Last week I wanted to predict a blowout but backed off - and save a couple turnovers my initial instinct would have been correct. I've been a little tentative on going all in with this WVU team, but this week I'm going to take off the panties and man up.

Dana Holgorsen and his staff have this group in a very good place mentally, primed to the point that he gave his shortest ever pregame remarks last week and the team came out of the gate on fire. Fortunately their performance left a lot of room for improvement, so complacency shouldn't be a problem. Clint Trickett is dealing and has the experience and comfort level with his receivers to get them the ball quickly and make the Sooners pay for their pressure in a way Tennessee could not last week.

The biggest key for the Mountaineers, however will be their ability to run. The Volunteers were able to exploit the OU aggressiveness on D with a couple long runs and whoever is in the WVU backfield will need to hit holes fast and furious to exploit the fleeting opportunities that present themselves. As such either Buie or Garrison will shine in this game as they were running last week with a purpose that seemed to elude Rushel Shell. He'll still be effective in short yardage, but it will be his cohorts who land a couple uppercuts to the Sooners.

Finally the WVU defense will be their typical efficient selves, doing just enough to win even if they don't produce any eye-popping stats. I see them returning to their ball-hawking ways of 2013 and forcing a pair of turnovers as well as getting a key late-game stop. Morgantown at night will once again be a place "where angels fear to tread."

I think the ultimate outcome of this game will look eerily similar to Alabama. Had WVU put together a full 60 minute win last week, or if Daryl Worley was playing, I would have more confidence in this game. However, the defense giving up 37 points last week scares me, especially with the success and confidence Trevor Knight has early in this season. WVU has played Oklahoma close the first two years in the BIG 12, and a night home game will keep this close, but eventually I think Oklahoma gets a stop late to hang on for the win.

Three factors decide this well played game. First, OU's aggressive defense, combined with WVU's struggles in the red zone, results in a tough home loss. The Sooners possess championship caliber defenders in both linemen and linebackers. Charles Tapper and Jordan Phillips, along with linebackers Eric Striker and Geneo Grissom should cause nightmares for Tyler Orlosky, Adam Pankey, Marquis Lucas, the WVU backfield and ultimately, Clint Trickett. WVU's red zone struggles haunt the Mountaineers, as four field goals will not be enough to pull off the upset. Second, WVU keeps the game close with a very good defensive performance, as Tony Gibson's unit and a fired up crowd make life miserable for Trevor Knight. However, the Sooners run just successfully enough behind a great offensive line to keep the game out of reach. Third, the Mountaineers turn the ball over too many times to win this game. A late score by the Sooners does not reflect on how close this game really was. Despite the loss, WVU demonstrates that the program has edged closer to contending for a Big 12 title.