The Mountaineers walked into Byrd Stadium with one thing on their minds: righting a wrong.

The last standing geographical rivalry on West Virginia's schedule never ceases to be a litmus test for what is to come of the remaining Mountaineer season. The Terps simply embarrassed WVU last year in Baltimore putting up 37 points and handing a shut out to supposed offensive genius Dana Holgorsen. With the rosters of both teams being relatively the same as last year, West Virginia had this game that Maryland has evidently started calling the "Border Battle" circled on the calendar and were ready to go. (Note: Personally, I think you have to reference the Mason-Dixon Line somehow in the title, but I concede Border Battle is pretty good.) Eers started off strong..... then it got weird.

Maryland won the toss and chose to defer with West Virginia receiving to start the game. After the touchback, Clint Trickett immediately went to Wendell Smallwood on a screen for the first play from scrimmage for a 50 yard gain. Then, a bubble screen to Kevin White for another 9 yards. The Mountaineers were cooking deep in Terps territory and feeding Rushel Shell to batter as many yards as possible. He eventually finds pay dirt. 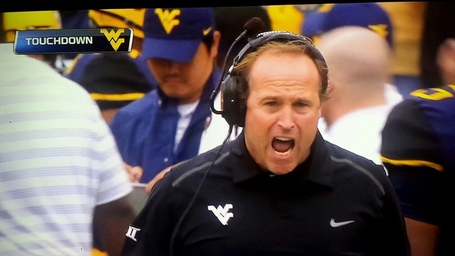 Michael Molinari kicked it for a touchback and the Terps started at their own 25 already down a touchdown. Things did not improve after the snap with Brandon Golson and Noble Nwachukwu sacking CJ Brown. On a long third down, CJ Brown was able to make up for it with a foreshadowing 19 yard run. First and ten....

The pass is tipped and intercepted by Daryl Worley. Great play by nosetackle Christian Brown to get his hands up after the cut block. This put West Virginia in business at the MD 44 with an offense still hot. Shell's conversion on 4th and 1 and Trickett's 19 yard pass to Daikiel Shorts put the Mountaineers in the red zone. However, woes inside the 20 continue for WVU as Mario Alford coughs it up.

Maryland moves the ball to midfield with midrange passes to Albert Reid and Deon Long, but end up punting for a touchback.

The Mountaineers do not mess around this time. Kevin White and Rushel Shell share a balance of reception/rush body blows before Trickett goes for the bomb.

The Terps got the ball back before the end of the quarter, but those 15 minutes belonged to the Old Gold and Blue.

Maryland starts out immediately just chucking the ball everywhere. CJ Brown passes to Andrew Isaacs, Deon Long, Stefon Diggs, and Marcus Leak put the ball at the WVU 28. A holding penalty on first down stalls the drive with the Terps still getting three.
WVU 14-3.
West Virginia keeps rolling. Shell gets a great return to put the Mountaineers within striking distance immediately at the MD 49. On third down, Trickett throws to the monster Kevin White on a wide receiver screen and we can all shut up about how Kevin White doesn't find the endzone.

West Virginia is feeling it and this game is starting to get out of hand. The Terps come out and give the ball to Stefon Diggs and Brandon Ross who make some plays. Maryland actually had a pretty good drive going, but another penalty deep in WVU territory proves insurmountable and, yet again, they settle for three.

WVU 21-6.
Noted WVU Football Enthusiast Dana Holgorsen has no problem with trading field goals for touchdowns. Rushel Shell springs loose for 22 yards and Trickett finds Kevin White for another 17 to cross midfield. The Mountaineers give the ball to Shell who rumbles for 9 to set up 2nd and 1. Football 101: What do you do on 2nd-and-1 and your running game is fully functional? Throw it deep. Bonus points if you have Mario Alford.
WVU 28-6.
Actual footage of Clint Trickett celebrating with the offense:

I'm thinking either our defense decided to join in on the dance session or CJ Brown and the Terps felt the whole thing was just tacky. Either way, the Maryland offense finally broke loose.
WVU 28-13.
"Wide open." No kidding. That was absurd.
So, what? Maryland shows signs of life. Good for them. WVU's offense is still cooking with gas and Wendell Smallwood busts open for a 16 yard gain. The Terps hold WVU to a 4th down, but jump offside to give away a 1st down. On third down, Trickett throws his worst ball to date this season.
Not awesome. Luckily, Maryland does nothing with it and goes three and out. The Mountaineers do just as much with the ball and look to punt. Then.... weird things happen.

There's a lot going on here, so let's break it down. First, WVU commits probably the most egregious fair catch interference penalty since the XFL. Because of this decision, the individual committing this infraction was in the helmet with ball. Because footballs are shaped the way they are, the ball bounces randomly, yet somehow perfectly into a Terp would-be blocker's hands. Said golden boy breaks away from two Mountaineers that go for the ball rather than wrapping him up.... and the chase is on.
The whole thing was called off because the returner had already called for a fair catch, thus disabling the receiving team from advancing the ball. But, even though it doesn't account for much on the stat sheet outside of 15 yards from the spot of the penalty, Byrd Stadium got all riled up. They get extremely so when CJ Brown takes this hit from Shaq Petteway.
Brown is taken out of the game to check for concussion symptoms. The Terps backup QB, Caleb Rowe, immediately comes on and throws to Stefon Diggs for 17 and a first down on the WVU 26. On 2nd down, he finds Jacquille Veii for 6.
WVU 28-20.

We just make a backup look like Steve Young. Whatever. Still up by 8 on the road at halftime.

The @WVUMarchingBand performs on the field during halftime at Byrd Stadium. #WVU leads Maryland 28-20. pic.twitter.com/R6kcuikovT

Alright, so Maryland gets the ball at the half, so we'll come out and stop them and set the tone, right? First damn play back from halftime.

The good news is that Clint Trickett can still ball and Kevin White is still a monster. (Every time.) On 2nd down, White snatches the ball over two dudes for a 42 yard gain. Daikiel Shorts catches a big 3rd down reception to put West Virginia at the MD 29 and Rushel Shell beats his way for another first down in the red zone. Then... he coughs it up.

Dear Lord. Just when it looks like the sky is falling, the defense holds strong and keeps the Terps on their side of the field. The punt only goes to the WVU 46, so great field position for the Mountaineers. Trickett finds White for 15 and West Virginia starts feeding Andrew Buie. Buie gets two first downs, but the drive stalls after getting into the red zone. On 4th down, Holgorsen calls a bootleg to the left gets stuffed. Turnover on downs.
Again, the Mountaineer defense holds strong. Maryland goes three and out and is forced to punt. Special teams can be fun sometimes, too, guys.
WVU 30-27. SAFETY DANCE.
WVU ends up with expected great field position at the WVU 44 from the kickoff. West Virginia a few doses of Rushel Shell before a blatant pass interference call gives the Mountaineers a first down at the MD 20. Shell gets a rush and a reception to make it 3rd and 2 at the MD 12. Trickett cashes in to Daikiel Shorts on a slant route.
WVU 37-27.

Things are looking decent for how many errors West Virginia has already committed. The Mountaineer defense has held Maryland as well as you could ask for the last few drives. CJ Brown, however, is not done. On first down, he runs for 37 yards to get the ball across midfield. Next play, he throws another 39 yards to Deon Long, but it is called back for offensive pass interference. The drive stalls and Maryland punts.
The quarter ends with WVU in great position after Mario Alford makes a 34 yard catch and Wendell Smallwood takes a few carries across midfield into Terrapin territory.

The farthest Smallwood gets, however, is the MD 36. The Mountaineers go for it on fourth down and fail to convert. Maryland does nothing with it and is forced to punt. Special teams rears its ugly head yet again.

Jordan Thompson muffs the punt and Maryland recovers at the WVU 8. The Terps get stonewalled by West Virginia's defense again and are held to three.

West Virginia does not respond well and goes three and out. Special teams, again......

That is less than ideal. Both teams go three and out giving the Mountaineers the ball with roughly seven minutes left. Trickett finds White for 35 yards (mandatory) and puts the good guys in field goal range. Dreamius Smith makes a few appearances, but West Virginia can't move the chains. They settle for three.... or at least attempt to. Special teams, y'all.

Maryland gets the ball with four minutes left. Not ideal. AND YET, BASED WVU DEFENSE HOLDS AGAIN. Huge 3rd and 1 stop. Terps punt and down it at the WVU 5 with 2:35 left. The Mountaineers throw the kitchen sink at Maryland. Shell and Buie both came out of the game with injuries, so Dreamius Smith gets a few carries. More supporting cast with Dustin Garrison (UPDATE: HE STILL EXISTS) picking up 13 yards on 3rd and 8. On 2nd down, Trickett finds Daikiel Shorts to move the ball across midfield. Garrison goes for another 10 to put West Virginia into field goal range. WVU eventually ends up with 4th and 1 at the MD 30 with 0:04 left.

NO SLEEP TIL OKLAHOMA