Join in on the fun! Even if you're new, there's plenty of time and chances to catch up.We're giving away a WVU Nike T-shirt at the end of the season to the overall winner. Plus, you can see how the staff thinks Saturday's game will go.

With two weeks under our belts, we have new leaders, wvusammy and Dwalk1217. Because it's a cumulative score game, you can always jump in late and catch up. Hey, look who else made a big jump up to #3, one game back. Here are the top eleven (with ties): 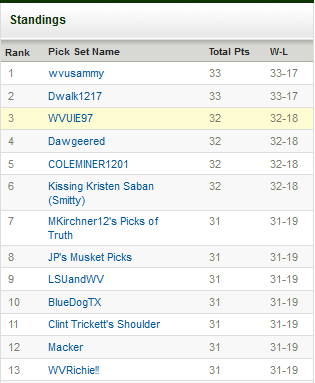 Engineerzach made a big statement after missing the first week and jumped right into the thick of things with 19 of 25 correct. Here is the Week 2 breakdown: 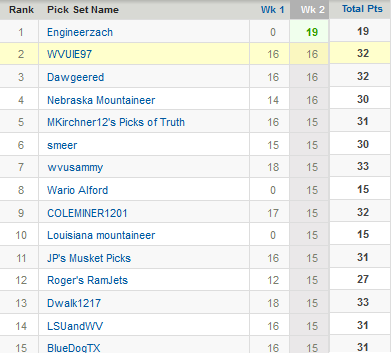 We have 25 games to pick this week, starting with EARLY games on Friday afternoon at 4 and 5pm. Deadline for each pick is 5 minutes before kickoff. Make sure you at least have your tie breakers in by then.

I've posted a score, but I'm not real sure how I think the game will actually go.

In what is always a barometer game, the Mountaineers come up huge and get their revenge on the Terrapins. Kevin White channels shades of Chris Henry, and comes down with a Clint Trickett touchdown pass in the final minute to give the Mountaineers the lead, and setting up the biggest game in Morgantown since the LSU Tigers came to town in 2011.

While it was clear to everyone watching that WVU was the better team. Randy Edsall was left wondering if Maryland's uniforms could have been a little more patriotic and if that was the difference.

No way this is a blowout in Maryland's favor, or, in the favor of the Mountaineers. To both teams, this game means too much. I think the Mountaineer Nation take over of Capital One Field at Byrd Stadium in College Park, Maryland plays a role. It will be a relatively neutral atmosphere aside from the pretentious Maryland student section. The Mountaineers offense has yet another big game and they only stop themselves from doing more damage on the Terps. The Mountaineers defense comes up with just enough stops to escape with a win.

It turns out Alabama is better than Maryland on offense and defense (who would have figured that?) as WVU comes alive in the second half to dominate the T(w)erps. While an early muffed punt lead to a Maryland TD, it would be the only time the little lambs across the border would sniff the goal line. Clint Trickett again looks poised in the pocket, and the defensive pressure overwhelms Maryland to show the WVU faithful that this year's team means business.

Shell and Smallwood WVU will get enough of a run game going to set up Trickett and company for some big pass plays. The defense follows the Towson effort with another good day holding the Terps offense in check. WVU prevails 28-13 with Maryland scoring late to make the game look closer than it is.

The momentum continues Saturday as the Mountaineer offense continues its effectiveness against the Terps. I would not be surprised to see William Crest get a few snaps in the redzone. Deon Long and Stefon Diggs are too good not to make some plays, but the defense does just enough to hang on for the victory.

The scenario for the third game of the Mountaineers season reads like Goldilocks and the Three Bears. With the expectations of an impending blowout in the opener, the Eers proved the first game (Alabama) was not too hot. They hung in there and showed they can compete with the best in the nation. Game two was against strong FCS, but inferior, opponent (Towson). The game could have been a letdown after the opener. However, the Mountaineers played a solid four quarters, leading to a 54-0 domination that was just a little, but not too cold.

This third opponent lies somewhere between the first two teams as far as talent is concerned. Maryland is just right. They handed the Mountaineers a 37-0 shellacking last year. This year, the team will be prepared. The offense has looked near unstoppable thus far, and the defense doesn't care that the Star Spangled Banner is written on the Terps jerseys this weekend. They're bringing some pain to a Maryland offense that currently ranks 84th in the FBS.

Revenge is on the minds of the Mountaineers from their embarrassing loss last season to the Terps. While Maryland is coming off a dud of a performance against South Florida, they are a better team than that and will get up for this rivalry game. However, WVU has looked impressive in its first two games, and I look for this trend to continue. Clint Trickett will sling it some more, surpassing 300 yards, and the Mountaineers win by double digits, setting up what could be the most highly anticipated game at Milan Puskar since College Gameday came to town, when the Mountaineers host Oklahoma next week.

The Mountaineer offense maintains it's big-play light ways as slow and steady wins the race for the hare over the tortoise. Taking what the defense gives them, the WVU offense scores field goals on its first two possessions before finally hitting for 6. The Terps answer and it's back and forth after that, with the 'eers staying just out of reach. The defense keeps everything in front of them and the speed of this squad allows them to chase Stefon Diggs without ever letting him get loose. Kevin White scores a TD and keeps his 100 yard game streak intact at 3. The offense tallies their biggest play of the season when Mario Alford gets behind the defense late for the 62 yard coffin nail. We're still scratching our heads a little at a red zone offense that yields only 2 TDs in 6 trips, but we're too excited about an impending night game to care.

The first half almost mimics last year's game as Maryland takes a 31-16 lead. WVU struggles against a stout Maryland defense early, with three field goals and only a touchdown before halftime. However, this game becomes an instant WVU classic as the Mountaineers find the end zone three times in the second half. Trickett shakes off a poor start (he throws a pick six), Shell and Buie get the ground game going and the defense shuts out the Terps in the second half to lead WVU to victory. Superior coaching and conditioning play major factors in this game, along with three Maryland turnovers after halftime.