The Ebb Of The Tide: Alabama Is Dead (And Here's Why)

A closer look at the tattered remains of dynasties past tells us one incontrovertible fact: Alabama is dead.

Share All sharing options for: The Ebb Of The Tide: Alabama Is Dead (And Here's Why) 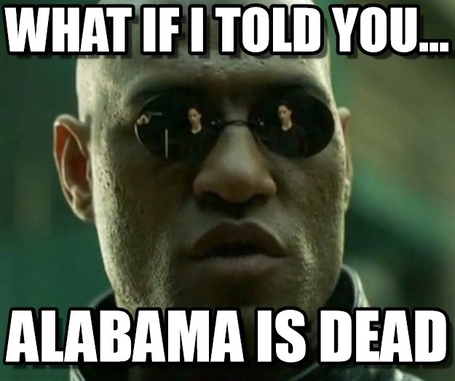 That's right, we're free. At long last, Nick Saban's crimson clad Deathmobile, which has been plowing its way through our college football parade since 2009, is no more. It has been a difficult tenure to endure. One long run-on sentence of murdered trees and tattoos and houndstooth and bad grammar and trailers and more tattoos and ROLL TIDE and boring-ass power football and grumblings about 'gimmick football' and one dour little man who seemed to stare into your very soul as he gave on-field interviews. But now, as we see the mammoth reeling from a two-game losing streak, we see a creature whose  vulnerability hasn't been so evident (or really even present) since its last two-game losing streak over five years ago.

But finally we can say those three beautiful words: It's over, Bama.

How do I know it's over? Because college football history tells me it's over. If you want to understand how or why, simply look at the dynasties that have come before. Let's check the roll call.

From 1987 to 1992 the Miami Hurricanes racked up 67 wins against only 5 losses and won a trio of national titles (splitting the 1992 crown with Washington). They were a dominating, strutting army of arrogance that transformed the college football landscape and inspired a generation of wannabes. Maybe it's best to walk softly and carry a bit stick, but "The U" hedged their bets by talking as big a game as they played.

Between 1993 and 1997 the Nebraska Cornhuskers were another indomitable force. They went 60-3 and won 3 of 4 titles from '94 to '97. Standing in stark contrast to the previous regime's arrogance, the 'Huskers were a head-down, I-option-running force of inertia that beat an opponent mentally by beating them physically, winning most games before they started.

The Hurricanes emerged again for another run from 2000 to 2002. What this one lacked in duration it made up for in potency. They went 35-2, were quite possibly the best team in America (despite finishing only 2nd in the polls) in 2000, captured the 2001 title with one of the most dominant seasons of all time and came one very late pass interference call from capturing another crystal football in 2002.

Finally and most recently, the USC Trojans imposed their will on the college football world from 2002 to 2005. They went 47-4, captured back to back titles in '03 (AP only as they split it with BCS champ LSU) and '04, had a trio of Heisman Trophy winners and were a play away from three-peating in '05. And then we had the Crimson Tide, who owned the college football world from 2009 until just a couple weeks ago. They ran up a record of 52-4 en route to 3 titles in 4 years and the elevation of Nick Saban to godlike status. The Tide's pro-style offense placed a premium on size and execution at a time when the hurry-up spread was all the rage as Bama drew upon a seemingly inexhaustible supply of very large and very fast human beings at running back who, while operating behind a road-grating offensive line were able to pound opponents into dust. Abandon all hope ye who enter without Johnny Manziel.

These historic runs were all characterized by winning percentages in the 90s and an air of dominance that intimidated teams, wafting through opposing stadiums to sap the crowd of hope and energizing the stands at home, hanging over every play and every big moment. You knew they were going to win. They knew they were going to win. With a nod to Sun Tzu, the games were often decided in the "temple of the mind" long before they began.

The numbers made you shudder. Think of Miami's record 58 game home win streak between '85 and '94. Or Nebraska's 26 straight wins. Or USC's 34 game win streak. Or Bama's not entering a contest anytime in 2011, 2012 or 2013 as Vegas underdogs. Compiling statistics like this isn't normal and at a certain tipping point reaches its own critical mass. The numbers are no longer trailing indicators of what has happened, but become harbingers of what's to come. If Miami has beaten 34 perfectly capable teams before they played you, what the hell makes you any different? If Alabama hasn't surrendered more than a single rushing TD in a game all season, why should you have any hope after you get down 10?

They are the best, they own your mind and the train rumbles on as their dominance takes on a near-supernatural form. Talking heads give them the benefit of the doubt on TV, every break seems to roll their way and even calls by the ref seem to fall in their favor. Inevitability is a powerful thing, and it is THEIR powerful thing. It feels like it will last forever.

Until Something happens. Because its always Something. An unexpected Something. A seminal moment when the invincibility is finally stripped away and the spell is broken. A ballsy gamble, a freak play or simply a quirk of fate, there's a point when the giant is struck and staggers. Rocky sneaks in that quick jab to Ivan Drago's face and the world is reminded that he too, bleeds. We stand incredulous as Duke screams in our collective faces "You cut him, you hurt him! You see!! He's not a machine, HE'S A MAN!!"

The Miami Hurricanes of the late 80s and early 90s were simply outclassed in their Moment. Riding a 29 game win streak but trailing Alabama in the 1993 Sugar Bowl, the 'Canes seemed poised to get back in the game before It happened. Tide safety George Teague ran down the speedy Lamar Thomas, who seemed en route to an 89 yard touchdown, and simply took the ball away at the 8 yard line. The 'Canes were deflated, 'Bama won the game and Miami was sent into a death spiral for the rest of the decade.

Nebraska's Moment came as a result of an opponent's huge gamble in 1996's inaugural Big 12 title game. (disclaimer: this was actually before the Husker's 3rd title of their run but I'd argue that '97 team never carried the air of invincibility that we saw in the years prior and that was a title run facilitated as much by luck - a kicked TD at Missouri - as dominance). With Texas nursing a 3 point lead and facing 4th and short from their own 28 with a little more than 2 minutes left, former Longhorns coach John Mackovic elected to go play-action and throw over the top to his tight end, gaining 61 yards and effectively ending the game. The Huskers' string of 5 straight conference titles was over and their death grip on football was broken.

The USC machine ran into The Moment when they came up short in their own all-in wager, ironically against the same Texas Longhorns. Clinging to a 5 point lead and facing a 4th and 1 try in their own territory with just over 2 minutes left, Pete Carroll eschewed a punt and went for it. LenDale White was stuffed for no gain, Texas took over and Vince Young entered college football lore in a historic title game upset. The Trojans were done winning titles as their program soon fell off a cliff.

The Moment that derailed the Hurricanes' second run was downright bizarre. Ohio State battled them close, but Miami had seemingly secured their 2nd consecutive title and 33rd straight win by knocking down a last-second pass attempt in the end zone. Confetti fell and the celebration commenced....until the latest pass interference flag in football history gave the Buckeyes another chance. The 'Canes were shell-shocked and Ohio State won in double overtime.

Armed with this understanding of history, it seems a certainty that Auburn's unthinkable Kick Six has been the jolt to the system required to break the spell of Saban. It doesn't get any more unlikely than winning a game with a play that has only been made 4 times in the 144 year history of the sport - and had NEVER ended a game. In one fell swoop, Chris Davis ended Alabama's 16 game win streak, extinguished any hope of a 3rd straight Tide title and finally tore a massive 109-yard gash in the notion of Nick Saban as an infallible football mind. Anytime a guy argues to put one more second back on the clock to try a field goal that ends up losing the game, can he still be called a genius? Proof that the Time of the Tide was over came the very next time they took the field against the Oklahoma Sooners in the Sugar Bowl. When Alabama scored easily on the game's first drive and then got the ball again with an interception, the world braced for the inevitable and all-too-familiar Bama Death March. Twitter was awash with cries of "uh-oh, Oklahoma" and it seemed Bob Stoops would soon pay for his preseason comments about the SEC. But a funny thing happened on the way to a blowout.

They quickly picked off A.J. McCarron to get the ball back, marched down the field, scored a touchdown, never  again trailed the game by more than and proceeded to enact their will upon the Tide as they built a 14 point halftime lead. Far from the tentative playcalling that has characterized so many Alabama opponents who seemed interested in merely securing a merciful death, the Sooners were the aggressors. Quarterback Trevor Knight was throwing darts as he exploited a weakness the Tide had managed to protect for the entire season - a mortal defensive backfield. The previously impenetrable Bama offensive line gave up 7 sacks as A.J. McCarron was forced into one mistake after another. Alabama was just another team getting whipped in a BCS game. No more, no less.

Now I'm not saying the Tide will immediately fold and begin coughing up 8-4 hairballs. They'll win 10 and quite likely 11 games as they spend most of their time in the top 10 and continue to beat overmatched opponents. Nick Saban has built a masterful recruiting machine that will keep his squad well stocked for some time. But the cracks are showing. Alabama lost out to Kentucky (KENTUCKY!) for a football recruit, and with the departure of Tide offensive coordinator Doug Nussmeier for Michigan, Lane Kiffin (LANE KIFFIN!) has become the head guy in Tuscaloosa.

These are not the trappings of dominance.

No, the reality is that we've seen this movie before. The run was impressive, but like all dynasties that have come and gone, the Tide suffered a lapse of immortality that provided the slight opening the rest of us needed to imagine a world without BAMA, and once broken that magic is impossible to reclaim. Their Moment has come, their wings have been clipped and they are now left to walk amongst the mortals.

The Roll is over.

Next Up In College Football