Game time is set for the WVU/Alabama tilt in Atlanta to kick off the 2014 season.

We had a hint of it yesterday but today it's official. The Chick-fil-A Kickoff Game featuring our West Virginia Mountaineers taking on the Alabama Crimson Tide will kick off at 3:30 ET. The game will be played in Atlanta in the Georgia Dome and aired on ABC and ESPN2.

The #CFAKickoff Game featuring WVU vs. Alabama is set for 3:30 p.m. on Aug. 30 | http://t.co/xnd3JGEtCw pic.twitter.com/WxHJ4uuatn

Our Mountaineers certainly have their work cut out for them facing the juggernaut that Coach Saban has built with "The Process." The Tide come into this game with a rare two game losing streak, looking to take out some frustration on our boys.

Most of you will recall the last time the Mountaineers faced a seemingly unwinnable challenge in the Georgia Dome. Let's look back to a certain Sugar Bowl from 2005:

And if have a few spare hours...here's the whole game:

Can the Mountaineers do it again? 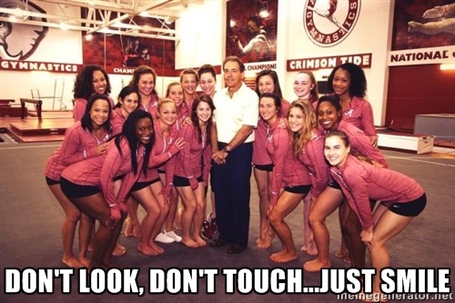 Look, I know the guy is a West Virginia native and all, but this still makes me laugh.