Bob Hertzel vs. Oliver Luck For The Soul Of WVU

Sometimes Bob Hertzel confuses his tweets with his DMs, and sometimes we get a good laugh. What does the longtime WVU beat scribe REALLY think of head coach Dana Holgorsen? Evidently that he needs bigger shoes.

Share All sharing options for: Bob Hertzel vs. Oliver Luck For The Soul Of WVU

A funny thing happened while I was taking a quick break at work scrolling absentmindedly through the Twitter feed. I saw Bob Hertzel's familiar visage and glanced at his latest tweet and then glanced again cause it didn't make sense. 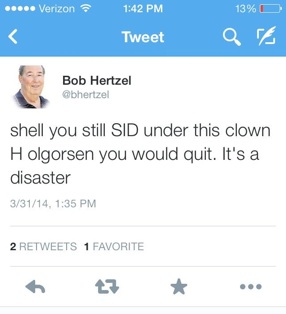 Clearly Bob got a little confused and thought he was sending either a Twitter direct message or a text message and accidentally let his 2,773 followers see what he REALLY thought about West Virginia football coach Dana Holgorsen. If you break out your Bob Hertzel decoder ring (drink more Ovaltine) you can learn that he was intending to send a private message to former WVU sports information director Shelly Poe who currently holds that position at Auburn University (he confirmed that as his next tweet was aimed at her and just said "oops.")

So I retweeted it a couple times and some folks got a hold of it and we all got a good laugh because one of those folks was Spencer Hall of Every Day Should Be Saturday. If you aren't familiar with Spencer he loves all things WVU and did his standard nice job of finding absurdity in the silly and trivial. Anytime a post includes:

*The governor of West Virginia is not on Twitter, and only communicates via flying messenger squirrels. They're slow, but so damn cute, even with a touch of rabies makin' 'em all nibbly-like.

you've had a pretty good laugh.

Having said all that I just wanted to leave it with a few parting shots.

Having said all that it was still pretty damn funny - and all the more because Hertzel didn't offer any sort of apology (aside from deleting the tweet) nor is he likely to. It will be interesting to see if there is any reaction from the athletic department. I'd guess no as they'd only be growing the story, but nobody likes to be called names.

Just be mindful of that tweet key, Bob. It can tell us a little bit more than you'd like.