After finishing the conference tournament falling quite short in the hunt for the Big Dance, the West Virginia Mountaineers are still able to fight for something in the postseason: an NIT Championship. First on the docket for the Eers is an old conference foe, JTIII and the Georgetown Hoyas.

Share All sharing options for: WVU vs. Georgetown: March Madnish 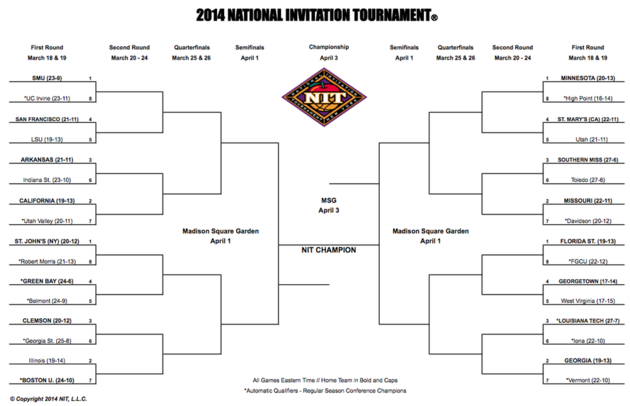 If you didn't catch the 30 for 30 the other night about the Big East, don't waste the time to go back and watch unless you want a long and drawn out history of Syracuse and Georgetown basketball.  Ezra Edelman and ESPN were less than kind to both West Virginia and our university as a whole, conveniently forgetting our slightly notable basketball history and the 2010 Big East Conference Championship over said Georgetown Hoyas. Give yourself a few minutes....

Four long years later, WVU and Georgetown meet again in the postseason. They do not meet, however, in front of the 18,000 seats of Madison Square Garden nor the 18,000 inside the Verizon Center, but amongst the 2,200 seats in McDonough Arena. While this game will be televised nationally on ESPN, there is a feeling that this game really doesn't matter. I assure you it absolutely does and it has nothing to do with this "rivalry" people are trying to force.

While Juwan Staten is questionable, this Mountaineer team needs every bit of tournament experience they can get. We all know that WVU is a good summer strength and conditioning program / summer film study session / eligible Macon / eligible Holton away from being somewhere, but experience never hurts and Georgetown can be beaten.

The Hoyas are a very hot and cold team.  They can get up for a game and beat the Creightons and Michigan States of the world, but can also never show up and lose to Northeastern (not Northwestern, Northeastern) and DePaul. They don't score much (averaging 70/game) and don't rebound well. They do, however, play defense and shoot well at home. Two players the Mountaineers must shut down are the Hoya guards Markel Starks and D`Vauntes Smith-Rivera. Together, they make up HALF of the Georgetown offensive production.

The good news is that WVU have faced very talented guards all year... this isn't their weakness. However, the outcome of this game will rest greatly on the availability of Juwan Staten. If our first-team All Big 12 point guard is at least moving the ball, that's better than nothing. Without him, it'll be tough sledding in a road environment where this squad already has trouble in any facility not the WVU Coliseum.