After finishing their season on the highest note possible, the West Virginia Mountaineers will attempt the Mission Improbable: winning three games in three days to clinch an automatic bid in the NCAA Tournament. Day 1: First Round bye. Day 2: Texas Longhorns. 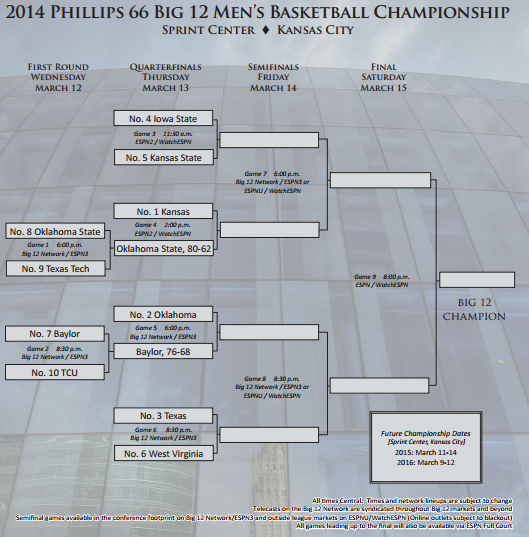 While the Mountaineers probably sealed their ticket to the postseason with the Kansas upset, the NIT is the only place they will be if they cannot get passed Texas. Even then, according to BloggingTheBracket.com's Chris Dobbertean, they still might need more.

@SmithFire13 Make the final and hope.

When it comes to the two teams, where they are completely at the opposite ends confidence-wise. West Virginia is coming off knocking off Kansas for the first time and a weekend where Juwan Staten was named first team All-Big 12. The Longhorns, however, are coming off one of their worst losses in the season going down in Lubbock 59-53. If confidence was all that mattered, the Mountaineers would be in great shape, but they still have to play on the court.

Unfortunately for West Virginia, Texas has been one of those teams that has their number. All season long, Rick Barnes's team has been a force to be reckoned with on the inside. The Longhorns have two of the most effective front courts in all of basketball with Cameron Ridley and Jonathan Holmes and they use their bodies around the rim very well. Fortunately, Devin Williams is coming off the game of his life at home against the Jayhawks and has found both his jumpshot and the ability to go up strong. If the Mountaineers are going to advance to Day Three in Kansas City, Williams needs to have another double-double performance rather than the 2 points-3 rebound one in Austin.