The WVU basketball team gets a huge win over K-State thanks to an even bigger performance from Juwan Staten.

Share All sharing options for: Eers Bring Down Wildcats: 81-71

The Mountaineers have been waiting for a big win at home since a close loss in Morgantown against Gonzaga. Finally, WVU has found their first victory against an RPI Top 50 team placing them tied for 5th in the Big 12 Standings. How big this win is cannot be understated.  Even bigger, however, was the performance of Juwan Staten in doubling his season average with 35 points and setting a WVU Coliseum record of 18 made FTs of 21 attempts.

The start of this game, however, was not as encouraging. K-State came out to a 8-3 lead by attacking the rim and getting the high percentage shots.  WVU were able to battle back with some 3RON and T3RRY moments and kept the lead for what ended up being the rest of the first half with fast-paced play and a lot of transition buckets generated by steals. Staten and Co. continued to drive the ball to the basket with numbers which forced the Wildcats to foul. Even when the ball didn't drop, the foul would still put KSU into the bonus and lead to the 37 FTs total taken by the Mountaineers. With all of this, WVU took a 39-31 lead into the half.

Second half had KSU coming out hot again, but not enough to overcome the Mountaineers lead. After slowly chipping away, Bruce Weber's team had tied the game with 12 minutes to go only to be answered by a WVU 7-0 run.  The Wildcats would not be within striking distance again until three minutes left when Remi Dibo makes what could be his shot of the year. Dibo had an excellent second half and it was capped off by a long range shot to extend the lead back into two possessions.  The Mountaineers never looked back.

This young WVU team took some huge leaps today including refusing to let the Wildcats take the upper hand in the final minutes of the game. When K-State forced up shots, WVU was there to rebound and outlet immediately. This win today could represent a confidence shift for these young men to grow upon not only for the rest of this year, but for the entire program for years to come in the post-"character exodus" era. Not to exaggerate or get too poetic, but Juwan Staten is basically a god.

The Eers now face a two week gauntlet with four straight ranked opponents starting against #23 Oklahoma on Wednesday night. Until then, let's all enjoy the hell out of this one. 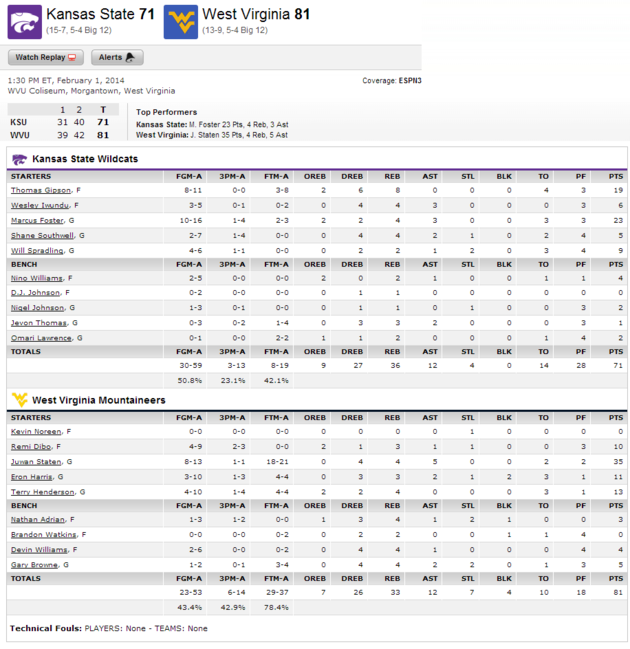