Join in on the fun! Even if you're new, there's plenty of time and chances to catch up.We're giving away a WVU Nike T-shirt at the end of the season to the overall winner. Plus, you can see how the staff thinks Saturday's WVU/Kansas game will go.

Our own JP Fanshawe has stormed into the overall lead with 16 of 20 right last week. But he's not eligible for the pri-ize. For those competing for the prize, DWalk1217 remains in the lead (2 points back from JP). Overall, it wasn't a very good week for most of the Musket pickers.

Because it's a cumulative score game, you can always jump in late and catch up. Here are the top eleven (with ties): 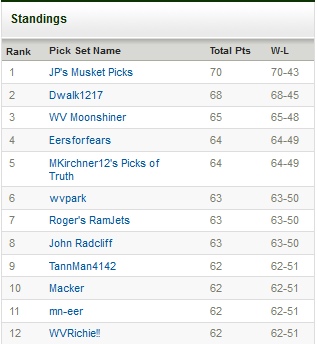 Here is the Week 5 breakdown: 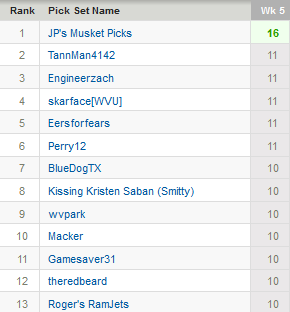 We have 22 games to pick this week, starting with Friday at 4 pm. Make sure you at least have your tie breakers in by then. Deadline for each game pick is 5 minutes before kickoff.

Couple the firing of Weis with the burning memory of last year's debacle in Lawrence, and you have a recipe that Charlie's ex-school won't like. WVU hits on all cylinders and rolls. By the way, Weis is awesome. It is a real accomplishment to get two schools to pay you 19 million NOT to coach.

Kansas shows some grit early on in response to new head coach Clint Bowen, but the Mountaineer offense proves to be too much as Clint Trickett, Kevin White, and Mario Alford continue to roll. Freshman William Crest gets some more valuable reps in the fourth quarter and the Mountaineers go to 3-2 with a big revenge game coming up in Lubbock.

Charlie will still travel to Morgantown to watch the game from Tudor's.

WVU rolls, the game is never in doubt, and Crest gets some valuable work.

Teams who have just fired their head coach almost always give a spirited effort for the interim guy. The Jayhawks will battle, but talent takes over as the Mountaineers get revenge for last year's debacle.

After firing Charlie Weis, Kansas enters free-fall mode and packs it in for the season. WVU, on the other hand, rights the ship after a hard fought loss to Oklahoma. The week off to polish the offense and defense was used well, and West Virginia cruised past the Jayhawks.

Mountaineers pick right up where they left off and the demons from last season's embarrassment are exorcised. Clint Trickett & Kevin White get off to a fast 28-0 start before boredom sets in & Kansas tacks on meaningless points.

All reports out of Kansas are that the Jayhawks are happy with the firing of Charlie Weis. Clint Bowen is near and dear to the Jayhawk community, being a coach on the staff for over a decade. I think the Jayhawks come out this weekend looking to prove something, but with their lack of talent, this game is over by halftime. WVU seeks revenge of last year's loss, and rolls.

Kansas comes out energetic and physical to start the game in the first quarter, keeping it closer than expected with an improved defense and forcing WVU to tighten up their bootstraps. The Mountaineers do and the offense begins to pour it on from the second quarter through the final seconds.