The West Virginia University men's basketball team looks to get back on track against the quickly spiraling Baylor Bears in Waco tonight at 7PM on ESPN2.

Share All sharing options for: WVU - Baylor Preview: I Hardly Know Her

Earlier this season, the Baylor Bears could not be stopped in either football or basketball. At the end of the year, Baylor was in the Top 10 in hoops and nothing is wrong with letting the people know with some screenshots.

Looks to be more of a cell picture of a monitor.... but either way, the rankings are a little different after Baylor has lost their last 5 of 6. 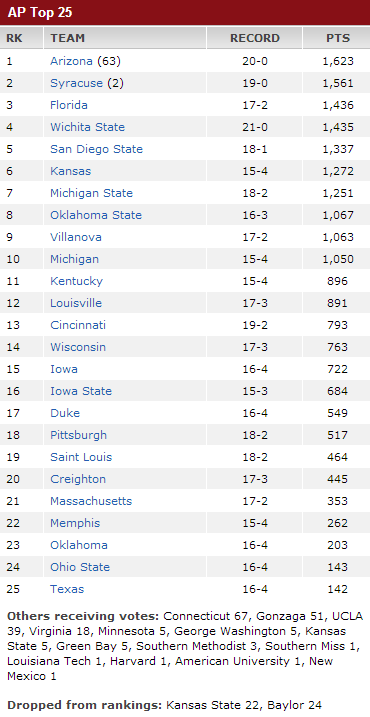 The seventh team in the Big XII against the ninth. This game looked a lot more fun/intimidating a month ago. While the Mountaineers try to figure out how to finish out a quality win, the Bears... well...

They are lost. From their last three games, Baylor has went 65/174 from the field for a blistering 37.4%. This is the same team that, on average this year, shoots 47% and is still 69th in the country even with going ice cold recently. Is it that they are playing better competition than their nonconference schedule? Sort of. They beat UK back when they were good and their nonconference RPI is still 8 compared to WVU's 99. Honestly, I don't think anyone knows what's going on in Waco other than this team is in a major funk and we must take advantage.

Even with Baylor's slump, they are still a Top 100 RPI team and this counts as a quality win. The Mountaineers still have zero (count em, zero) quality wins this season and I don't care if Baylor is bleeding out in front of our eyes, it still counts.

For them to do it, WVU must contain the Baylor main scorers: Cory Jefferson and Kenny Cherry. While Isaiah Austin is certainly a force in the middle standing 7-1, the Eers can eliminate this threat by (Staten) driving the lane and getting him into foul trouble.

One very big factor for the Mountaineers will be if Watkins and Williams can stay on the court and out of foul trouble. This was the driving force for the loss against Oklahoma State and will continue to plague WVU until this problem is fixed. That can't happen again.

It will probably happen again.... but Baylor is bad enough right now that it might not matter.