WVU battles their way out of their recent rut with some big individual performances including 28 points from T3RRY.

The Mountaineers get back on track and improve to 11-8 on the season in a game that was very much a rollercoaster ride. A huge performance from Terry Henderson (28 pts, 10/13 from field, 5/6 from three) and support from Juwan Staten (16 pts, 7 assists, 5 rebs), and Eron Harris (15 pts, 3/5 from three) pushed the Mountaineers over the top while the Red Raiders consistently fought back.

WVU came out hot going 6/6 from three extending their lead to 20-10 into the second TV timeout.  Everything changed when Dusty Hannahs checked in and starts going off.

That run would continue to grow into an 18-4 bleed until the Mountaineers could start trading punches. Eventually, WVU would actually regain the lead and a little bit of control until dumb happens. With 1.5 left on the 1st half clock, the West Virginia inbounds pass goes the length of the court out of bounds..... ball to Tech. Red Raider Dejan Kravic chucks it at the rim and it goes in. 40-39 WVU into the half.

Luckily, the Eers still had some juice left in them and came out of the gate strong to extend their lead to nine.  While it did get close at some points in the second half, West Virginia never lost that lead by countering any Raider onslaught with some big outside shots. Most of that Texas Tech surge was lead by, again, Dusty Hannahs, who finished with 25 points and 7/7 from three.

Few things to take away:

1) Terry Henderson played out of his skull tonight. While we all know that Staten, Harris, and Henderson are capable of these kinds of games.... WVU is going to need some consistency in the next few games.

2) The Mountaineers were able to keep the Red Raiders at bay throughout the entire second half. While there were some low basketball IQ plays that could have cost them late, the ability to score when necessary down the stretch won this game. That has been a curse all season long and it's better late than never. 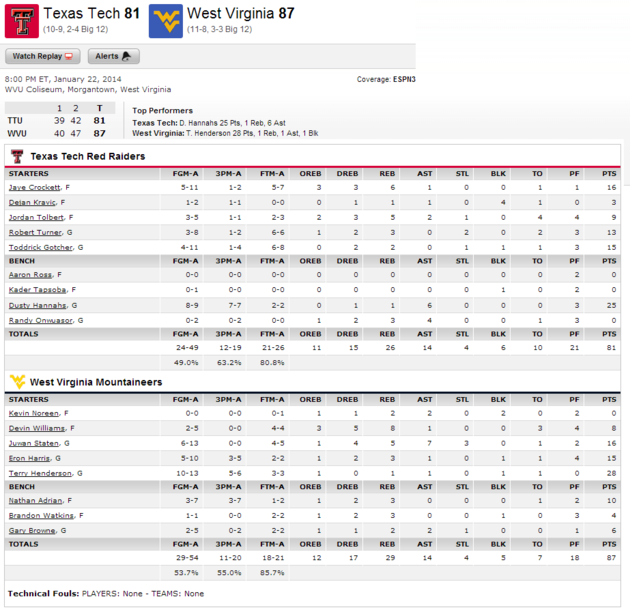