Mountaineers went into Norman +20.5 point underdogs. The defense, of all people, made the Mountaineer faithful proud. All other factions of the game, however....

Take everything that was the 2012 WVU vs. Oklahoma game. While perfectly encapsulating the Big 12 Conference, dominating offenses with sensational athletes made spectacular plays to just rank up the points. NFL quarterbacks in Geno Smith and Landry Jones dueled in a game where the horrid defenses were torn to shreds. Take all of that, COMPLETELY REVERSE IT, and that was the 2013 WVU @ Oklahoma game. The only parallels to last year's face off were that it was a close game and that the team's effort made us proud.

The defense made us proud, that is. The Mountaineers D forced four turnovers and the rest of the team simply could not do anything with them. With four turnovers of their own, eight penalties for 66 yards, and some of the most egregious bonehead moments you will ever see on a football field, it really doesn't matter who nor where you are playing. It could certainly be argued that Oklahoma did not beat the West Virginia Mountaineers, but the West Virginia Mountaineers did.

The Mountaineers received in the first half and moved the ball decently. WVU really got it rolling with a 24 yard catch from Sims to enter Sooner territory. Then, the first of many odd happenings during this game occurred. Bob Stoops doesn't like what WVU is showing on the first down following the 24 yard gain. After both teams return to the field, Holgo takes a timeout. Little did we know that this would be a bit of foreshadowing to the timeout WTF moments to come later.

After a chop block call on Dreamius Smith, the Mountaineers can't climb out of the 2nd and 24 hole and punts OU to their 10. OU's starting QB Trevor Knight starts off with a smooth 9 yard gain.... the ridiculous strikes again.

Totally looks like WVU gets a fumble. Actually, Trevor Knight somehow gets control of the ball and chucks it while somehow keeping the football beyond the goal line. The crew rules this intentional grounding and OU goes from 2nd and 1 to 3rd and 19. WVU inches away from getting an easy two. 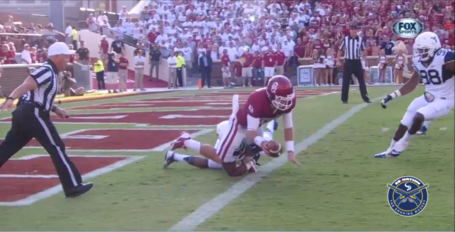 Woof. OU backed up in their own endzone. Big moment very early in the game. The very next play...

... the Mountaineer defense lets OU off the hook giving up a 33 yard run. C'mon man. To their credit, OU didn't get another yard that series and were forced to punt WVU back to the 15. Millard fires a good pass to Kevin White for a first down. Dreamius Smith, then, breaks lose. 7-0.

Great start for the Mountaineers. OU comes out and goes three and out. Unfortunately, WVU roughs the punter and gives the Sooners a fresh set of downs. OU moves the ball methodically down the field but stall at the WVU 27. It's field goal range for a decent kicker and Oklahoma's K Hunnicutt is a decent kicker. 7-3.

West Virginia got the ball back and doesn't do much with it. Sims gets one good run but it ends with O'Toole booting OU back to their own 15. Three and out for OU. Ridiculous strikes again. 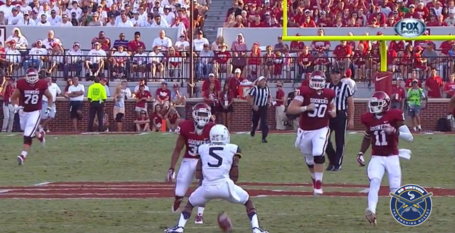 That muffed punt would advance the ball 44 yards and put OU in business deep into WVU territory. 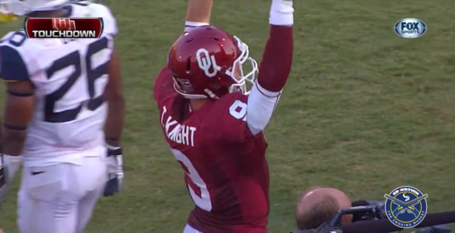 WVU gets the ball back and Paul Millard throws a big 33 yard pass on 3rd down to Ronald Carswell to keep the drive alive and cross midfield. A few plays later, the Sooners force a Millard fumble and take control with good field position. 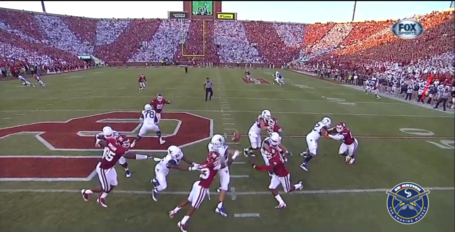 WVU defense step it up. Mountaineers force a 3rd down and long, but give up a 34 yard reception to OU WR Bestler. Isaiah Bruce, however, forces a fumble and Darwin Cook (game ball) recovers. Bend but don't break qualities from the Eers D. 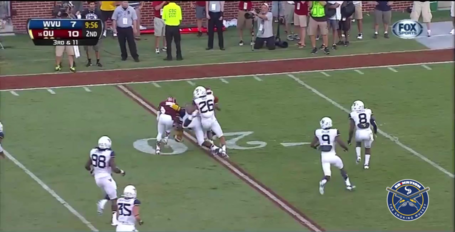 The offense, however, can't do anything with it. Immediate 3 and out and the Sooners return the punt to the WVU 43. OU drive down to the WVU 25 and are faced with a 3rd and 4. A wild Brandon Golson appears...

Dear Lord. Knight looked hurt but he wasn't (yet.) WVU offense again doesn't produce with the huge stop. Three and out, punt to OU 14. The Sooners go a good job of balancing pass/run with four minutes left to drive down the field and kick a field goal to essentially end the half. 13-7.

The Sooners received to start the half and the Mountaineers did exactly what they needed to do to start the half: three and out. Sadly, the offense doesn't show and punts immediately themselves. Oklahoma's RB Brennan Clay breaks off two massive rushes (34, 26 yards) to put the Eers D firmly against the wall at the WVU 5. Bend but don't break? Absolutely.

Massive play by Cooke. Millard and crew HAD to do something with this at least to give the defense a break. Three completed passes and a run later, WVU is in OU territory and looking good. This is why we can't have nice things. 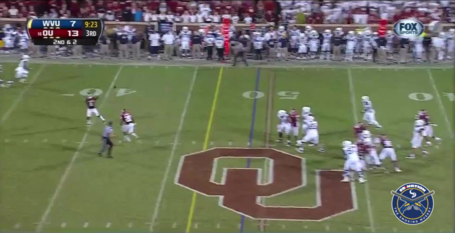 Balls. OU RB Brennan Clay tears another monster run to put the ball at the WVU 25. Did I mention how this game was ridiculous?

All hell has broken loose in Norman. Luckily, WVU is saved on third down with a pass interference penalty and they start moving the ball. A Ronald Carswell catch and Sims run has the Mountaineers crossing midfield and in business. Another Sims run puts WVU on the OU 37. RB Wendell Smallwood gets a 3rd down catch to move the chains to the OU 25. After a holding penalty, the Mountaineers face a 3rd and 20 where.... 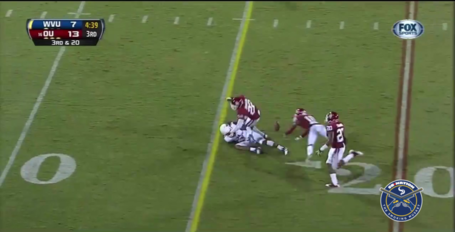 Another damn turnover. Somehow, the defense holds AGAIN. The Sooners punt and Mario Alford fair catches at the 5 yard line.

WVU does absolutely nothing with it. A short punt puts OU with good field position at the WVU 38. AGAIN, the Mountaineers hold the Sooners from doing anything. Unbelievably clutch. What does the WVU offense do with it?

Absolutely nothing. O'Toole punts and Bob Stoops had had enough of this war of attrition. OU QB Blake Bell aka the Belldozer takes over and immediately runs for a first down. The Sooners switch between running with Bell and RB Damien Williams into scoring position. With an OU false start and pure Mountaineer defensive heart, Oklahoma is held to a field goal. Unreal stuff. That being said, it makes it a two possession game. 16-7.

Do or die time for the Mountaineers. Following three Sims runs, WVU is at midfield but are pushed to 3rd and 8. Millard throws to Kevin White for 6 yards to make it 4th and 2. Ridiculous happens. Millard doesn't snap the ball and wants a timeout. Delay of game because West Virginia doesn't have any timeouts. They had used them all during the 3rd Quarter for inexplicable reasons. Now, 4th and 2 is 4th and 7..... incomplete.

The game was essentially over outside of two dangerous injuries while the Sooners were killing the clock. WVU's Doug Rigg was reported to be in the airport Sunday morning with a neckbrace after spending the night in a Oklahoma City hospital. OU Tyrus Thompson also looked to have suffered a left leg injury but nothing has been released as of Sunday night. Some dumb garbage time stuff happened but nothing important. The score stood 16-7.

- As you can see with the pictures, WVU displayed the all-white jersey package. Looked sick. From now on, we will refer to this as the "Stormtrooper Kit."

- Holgo reviewed the Millard fumble after it was already reviewed. Kinda dumb.

- Roughly a billion injuries and I have no idea how we deal with them.

- Texas is bad. If our defense plays like they did in Norman and we can figure out how to play offense, should get a W there.

- We still don't have a quarterback.