Staring Down The Musket At...The Oklahoma State Cowboys: A Blogger Q & A Session

In addition to the most fun podcasts we've had to date, Robert Whetsell of the SB Nation Oklahoma State blog Cowboys Ride For Free was kind enough to answer some more questions for us.

Share All sharing options for: Staring Down The Musket At...The Oklahoma State Cowboys: A Blogger Q & A Session

TSM: I know we talked about this in the podcasts, but for those who haven't had the chance to listen, is the switch from Chelf to Walsh at QB a big surprise considering how you went into the Miss St. game with Chelf as the starter? Was it a pretty close battle leading up to the season? Is this how it should have been all along or were there concerns Walsh could hurt what looks to be a good shot at a Big 12 title and BCS bowl birth?

CRFF: While I have been a Walsh proponent all along, I think there were quite a few people that were surprised that Chelf didn't come back out for the 5th series against Mississippi State. That moment, plus Gundy's constant recanting since the end of spring practice, confirmed for us what sources said happened, particularly in the fall. From about the 5th practice on, word was that Walsh took it to another level in his performance, and there was no question that the offense was functioning more effectively and efficiently with J.W. at the helm. Gundy pronounced Chelf the starter, probably get all the reps with the one's in the spring. After spring however, "We aren't ready to name a starter." Then Wes Lunt transferred, and that made it clear for me that Yurcich had an eye for Walsh, since our New OC has, in the past, preferred a QB that was an effective runner when needed.

Gundy insisted that both would play, and that they would alternate series. When J.W. came back out after two unproductive series, the dye was cast.

I personally felt all along that Walsh was the better option (between him & Chelf) based on his numbers from 2012, in addition to his leadership qualities, but a lot of folks still didn't (and still don't) believe in his ability to stretch the field in the passing game. I'll just say that I would like to see him put that to rest.

The great part for OSU is that both players are extremely well liked by teammates, fans, and coaches.

TSM: On one of our (rambling) podcasts, you touched on the Oklahoma St defense and a couple of guys who look to be playing on Sundays soon. Could you please elaborate on them and any other defensive Cowboys we need to be aware of?

CRFF: The two definite NFL prospects are DL Calvin Barnett and CB Justin Gilbert. Barnett will be a problem for the middle of WV's offensive line since his sidekick, James Castleman can be equally disruptive (and I think will have a good shot at the pros). Justin Gilbert has been freed from the soft coverage philosophy of the past, and while the Cowboy's secondary has not been truly tested, opposing teams are clearly NOT throwing his direction much. He plays physical and fast (fastest player on the team) and is a dual threat on kick returns. Don't be shocked when you see OSU's corners in press coverage. Kevin Peterson has been solid opposite Gilbert.

A player flying a bit under the radar is S Shamiel Gary. He has made huge strides in his pass coverage and has been around the ball a lot in the first three games. The LB's are solid, led by Caleb Lavey and Shaun Lewis, and have thrived this season with Barnett and Co occupying multiple blockers at the line. The DE's are really fast, but have been a little spotty so far. You should see plenty of Jimmy Bean, Sam Wren, and the patriarch of the group, Tyler Johnson. As a group, the front 7 are very good against the run.

If the Mountaineers can't force OSU to commit extra players to stopping a particular part of the offense, I think you will continue to see the struggles witnessed against OU and Maryland.

TSM: Also on our podcast you mentioned that current OC Mike Yurcich is a guy who's willing to stick with whatever is working on any given game day. Does that mean many of the offensive trademarks from Holgorsen (and Monken) have gone by the wayside?

CRFF: Not at all, but it is evolving. Dana and Todd were more like the mad scientists, creating this new environment for offenses, with not a lot of care to the consequences (clock management...giving your defense a breather). Yurcich strikes me as the guy who's going to take what is given him and figure out how to take advantage of whatever part offers the most in the moment. He knows he has talent at all the skill positions, so he'll commit to whichever gives him the best chance to win depending on the opportunity.

TSM: Do you believe Jeremy Smith is the best running back in the league? 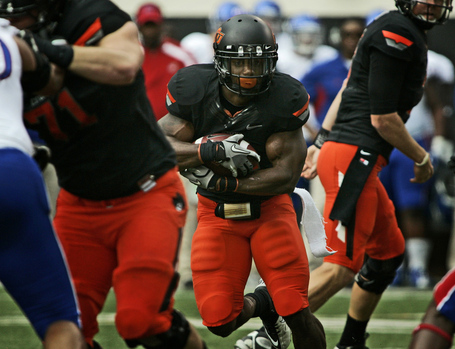 TSM: How many OSU faithful should we expect in Morgantown?

CRFF: Hard to say, since this is the first trip for all of them, I imagine. I'll guess somewhere between 250-500. It really sucks that I won't be one of them. I guess I'll have to frame my ticket.

TSM: Between T. Boone Pickens and JW Walsh, does anyone in Stillwater use their full first name?

CRFF: I do...wait, I'm not in Stillwater. T. Garth Sanders is one of our contributors. You may be onto something.

TSM: Speaking of which, how is T. Boone's health? Is there any chance we could fix him up with a WVU lady and start funneling some of his money to Morgantown?

CRFF: Here's your chance...Boone has made it clear he won't tolerate "cheating" in OSU's athletic programs, particularly football, and would quickly take his money elsewhere if such existed. If you could find a writer of poor integrity willing to cast dispersions upon the Cowboys' football success, you might just be able to create a situation where he could be lured him away. Ooops...cancel that...I see you mentioned Joe DeForest in your next question...

TSM: The Embattled Joe DeForest has come under fire here lately for some high profile special teams miscues: namely muffed punts and consistent penalties on kick returns. What was the general impression of Joe D as a ST coach? Was he happy with the job OSU did in that area during his tenure?

CRFF: OSU had pretty good special teams play during Joe's tenure. The only iffy thing sometimes was kick coverage. I do know when he left our punt return game went missing, so maybe he was paying those guys. Either he's not paying your guys, or he's not paying them enough. We've got a list of guys you can talk to about that...

Thanks again to Robert Whetsell (@RobertW_CRFF) of Cowboys Ride For Free for entertaining and excellent insight throughout this week. You can see my answers to his questions HERE.