Recap: Game Three - Beat The Teams You Should. Eers Win.

The Mountaineers came into Saturday favored by 40 points (seriously) on Saturday against the Georgia State Panthers with a redshirt QB making his first start. Dominance ensued.

Share All sharing options for: Recap: Game Three - Beat The Teams You Should. Eers Win.

When we went into Week 1 this year, the Mountaineers were expected control the game and get an easy win against William & Mary. WVU was expected to throw it around for a few TDs, smooth out some wrinkles of the offseason, and put their offensive weapons on display while showing a juxtaposition of pure class between the two squads. All of that happened, but we had to wait until Week 3 to see it. 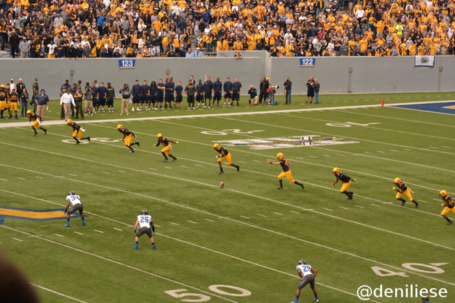 The Georgia State Panthers started off receiving the ball in the first half. GSU RB Travis Evans was easily the best player on this team Saturday and started off with a 15 yard gain on the first play of scrimmage. After that run, the WVU defense clamped down and forced a punt. WVU WR Ronald Carswell had a good debut as the Mountaineer return man starting out juking a few dudes and getting a 22 yarder to the WVU 47.

West Virginia started their first drive with QB Ford Childress pitching it off to Mario Alford on a reverse for 24 yards. After two runs from WVU RB Charles Sims, Childress faced his first third down situation with six to go and stepped into an incoming blitz to fire a great ball to WVU WR Mario Alford. Dropped. Right in the hands at the first down line. WVU K Josh Lambert hit the 42 yard FG. 3-0.

The Panthers took the ball at the GSU 25 and, again, handed it off to RB Travis Evans on a draw for an 18 yard gain to the GSU 43. Tons of space to run. The Mountaineers defense then started to swarm the ball and forced another punt early in the game. GSU P Matt Hubbard punts WVU back inside their own 7 yard line.

This is the point where the offense started to click. Childress threw a quick bubble screen (lol) to Charles Sims on the outside for a quick 10 yard gain. The Mountaineers kept the pace up and moved the chains with a few short gains. Georgia State weren't wanting to get beat by the Mountaineer running game, so the Panthers consistently put 8 men in the box and played straight man-to-man on the outsides essentially daring the redshirt freshman QB to beat them. Childress matched this wisdom by throwing deep into double coverage to WR Kevin White. Bad decision but it didn't cost him. Next play on 3rd and 8, Childress throws between the LBs and safeties on a Cover Two to an open WR Mario Alford for a 19 yard gain. Good decision. A few runs later to keep the defense honest, Childress play actions and throws to WR Ivan McCartney who beat his man across the middle for 21 yards. Georgia State calls a timeout because of the Eers pace and trying to slow the yard bleeding. Mountaineers come out and spread the field four wide and Childress finds WR Daikiel Shorts in the middle of the endzone. 10-0. 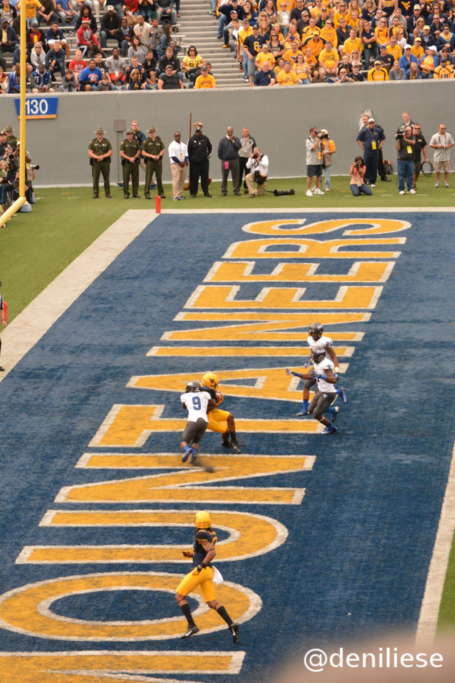 Money. Longest drive of the year for WVU thus far. Things are looking really good when the defense stuffs the Panthers and force a three and out. Unfortunately, nothing doing for the Mountaineers offense and the quarter ends with Georgia State with the ball and driving.

The Panthers actually get within striking distance with a 31 yard pass to GSU WR Robert Davis, but get a false start and end up punting for a touchback. First play back on the field, Childress finds WR Ronald Carswell on a post pattern in the middle of the field for 43 yard gain. There's no denying this kid's arm. After getting into a bit of a short pass rhythm, WVU has a 3rd and 11 on the GSU 26. Here was the Root Sports commentary going into the next play:

Rasheed Marshall: "That's right. Again, they're going to throw it all at West Virginia because they don't have anything to lose right here. They want to try to take their chances and force West Virginia into some pressure situations and force them into some mistakes."

Georgia State did bring the house and forced Childress into throwing the quick slant across the middle. Safety jumped the route and picked it off. Textbook stuff from GSU but SOMEONE NEEDS TO LEARN WHAT ABOUT JINXING.

That being said, GSU isn't able to do anything with the turnover (mostly due to drops) and punt. WVU RB Charles Sims busted off an 11 and 25 yard runs to get the Mountaineers into Panther territory. After a couple rushes with no gain, WVU WR Kevin White drops the pass on a WR screen route that might have dug the Eers out of the 3rd and 11. The seam was there for a TD and it goes right through his hands. Holgo trotted out K Josh Lambert to take a 53 yard kick that shockingly fell short.

Georgia State comes out with good field position and gets a few nice rushes for a first down. After a WVU DL Ronnie Bell gets a sack and some failed rushes, GSU gets another false start penalty and punts after not converting a third and long. Fun commences.

The Georgia State punt is shanked and only goes 16 yards to put the Mountaineers on their own 40. WVU RB Dreamius Smith finds some space offtackle and runs for 15 yards to the GSU 45. Childress finds WR Ivan McCartney completely alone streaking down the field from some ridiculously blown coverage. Money. 17-0.

To be completely honest, Childress underthrew McCartney somewhat. DM;TD. Georgia State takes the field in a two minute drill and it ends fruitlessly even with a Darwin Cook personal foul by hitting a "defenseless receiver." The half ends with a DT Will Clarke sack.

The Mountaineers received the ball at the start of the half and caught a case of the drops. Charles Sims still running like a man, but WVU wasn't able to make it really click. After a chop block call (how many are we going to have of those this year?), WVU gets into a 3rd and 25 in GSU territory and Childress throws a good ball to WVU WR KJ Myers. Holgo goes for it on 4th and 3 instead of kicking the FG, but GSU get the sack. Let it be known that WVU WR Kevin White dropped an easy TD. Again, right on the hands.

Immediately after the sack, GSU RB Travis Evans runs 65 yards for the TD. 17-7.

So, that sucked. Evans would end up with 118 yards on the day and that 65 yarder is the longest in school history for Georgia State. Awesome. After trading punts, WVU drives the field with some nice Childress passes and Charles Sims runs which lead to a FG. 20-7.

Chuck Sims finishes the drive with a 32 yard run and dive across the pylon. 27-7.

Georgia State responds by getting absolutely stuck by Nick Kwiatkoski and fumbling the ball at their own 33. Childress hooks up with Daikiel Shorts going five wide across the middle for 16 and again on a play action in the endzone. 34-7. 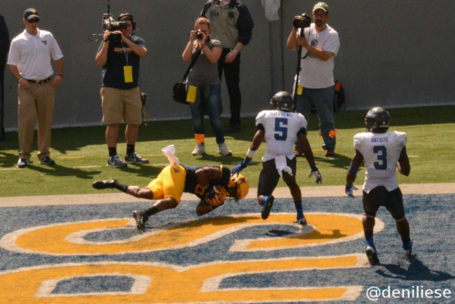 Sick catch on a corner route. Georgia State had no answer for the rest of the game. Dreamius Smith had one more TD run to finish off the game at 41-7.

- Solid performance throughout the whole team. Childress looked comfortable at times. Not sure if he's ready for Baltimore though.

- I thought ROOT Sports did a good job with coverage. Love Rasheed, but his commentary was somewhat lacking. He'll get better and I'm sure this won't be the last time we see him. My man crush on Rob King continues.

- Root interviewed Oliver Luck during half time. He said some interesting things such as an announcement for a home-and-home with Penn State coming "very soon" and being in talks with Pitt, UVA, and Cincinnati for future non-conference games.

- Last note on ROOT: they had a graphic saying that in 2014, WVU fans should expect coverage of baseball games, 52 coaches shows, and 12 Holgo press conferences.

- Maryland is good and are favored (-4.5) as of Sunday for the Baltimore game.