The West Virginia University men's basketball team travels to Lubbock, Texas, at 1:30pm on Saturday to try to rebuild after two consecutive losses.

Junior forward Jaye Crockett is the only true threat on this Texas Tech team. He does, however, spit the truth every once and a while on Twitter.

Boom. Exceptional subtweet. Makes me wonder if she has the Raider Rash. 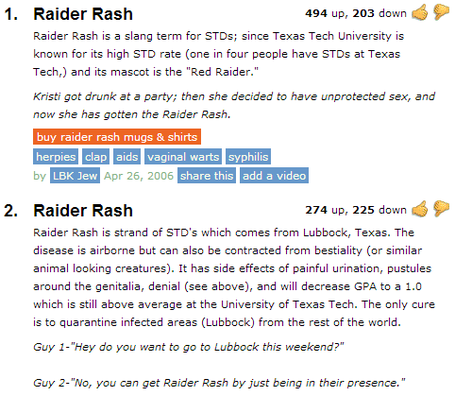 As I said in the podcast, this is a game that the Mountaineers have no excuse losing. Texas Tech is in triple digits of every statistic in the country including being #205 in RPI and #134 in SOS along with losing four of their last five. The Mountaineers absolutely need to clean up in Lubbock and, upon looking a few games ahead, could conceivably get on a roll with a home game against the Longhorns and @ TCU following this contest. That's all well and good, but the Eers need a win today first.

The Red Raider squad is lead by junior forward Jaye Crockett, who averages 12 and shoots 52% from the field. Oddly enough, none of the TTU players average over 26 minutes, so we will see all eight of their lineup in a healthy dose as coach Chris Walker tries to find a working combination. We have already seen this exact strategy this year as Huggins does the exact same thing, so this will be an ugly game that probably won't catch any true traction of pace. Even still, WVU had a good amount of time off after a great effort against Kansas. That rest and extra practice should translate onto the court in beating a lower level Big 12 team.