Eers Dumptruck Both William And Mary, 82-45

WVU gets the job done again in Charleston against a weaker opponent. This time, however, there was never a doubt.

Share All sharing options for: Eers Dumptruck Both William And Mary, 82-45

The Mountaineers improve to 8-5 on the season in a game that was never in question outside of the first TV timeout. W&M started with a 6-4 lead shooting 3/4 from the field, then proceeded to go 4/25 for the rest of the half. During the halftime interview, Huggs told ROOT Sports that the difference was simply subbing in players that wanted to play defense.

The Mountaineers continued to stifle the Tribe's Princeton offense after the break and allowed only 21 points in the second half.  While W&M had trouble having any shots fall with a 25% field goal percentage, the Mountaineers took advantage of transition points and open shots in the half court offense.

Two good things: 1) Terry Henderson and Nathan Adrian both had their best games to date.  Consider the competition, but conference play comes with the new year and now is a great time to get cookin'.  2) WVU went 14-15 from the line in a building not the Coliseum.  While Charleston was hardly a neutral site, it's still nice to see them do it.

Big XII play kicks off at 4PM on Saturday (Jan. 4) in Fort Worth against TCU. 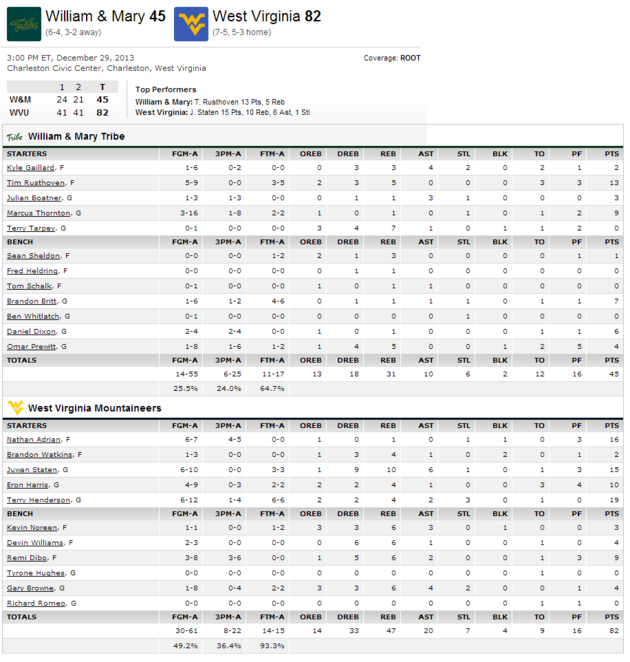