Are The Mountaineers An NCAA Tournament Team?

SmithFire13 dives into the depths of algorithms and decimal points to give you a real answer on whether West Virginia will go dancing this year.

Share All sharing options for: Are The Mountaineers An NCAA Tournament Team?

Let's get one thing out of the way before we really dive in: WVU is probably not winning the Big XII tournament. With that assumption, the Mountaineers would have to compete against the vast field of non-conference title holders for the remaining 37 at-large bids. While the selection committee can be unpredictable at times, they do tend to follow the mythical ratings system known as the RPI. While some may be intimidated by the decimal points, rows, and columns, it's the best barometer we have as fans to know exactly where the Eers stand when it comes to March likelihood. Also, it's a helluva lot easier to understand than what we've had to deal with in the BCS, so this won't be too bad.

Let's take a look at the WVU resume as it stands. (Click to enlarge)

Note: Going to be using ESPN RPI. The difference between ESPN/SI/anyone else is negligible for the more broad topics we're covering. Moving on...

The good news is that Wisconsin is 1st in RPI, Mizzou at 19th, and Gonzaga is 24th, so those losses don't hurt that much. While there is no such thing as a "good loss", if Mizzou/Gonzaga drops into that 26-50 ranking, those defeats won't be as benign. Another plus is that WVU has a strong SOS, a number that won't drop and will continue to pad them mathematically throughout the year. What is hurting them are the VT loss (66th in the RPI) and that big fat zero in the win column for any teams in the RPI Top 100. WVU can't do anything to about it until January 11 vs. #7 Oklahoma State. However, the Mountaineers can certainly hurt what is already a weaker position with games against Purdue (RPI 89), William & Mary (193), @ TCU (110), and @ Texas Tech (150) before then.

While that's all well and good, none of it makes any sense without some reference to what it means for the tournament. To give a little perspective from a conference standpoint, this is what the conference RPI looked like at the end of last year. Again, click to embiggen.

Try to ignore the highlighted bad team. What we are looking at are 1st-6th. KU, KState, and Oklahoma State all got in to the tournament with high seeds. As you go from OSU to OU, the RPI ranking also drops from 26 to 42. While The Pokes were a 5 seed, the Sooners and Cyclones both went dancing with 10 seeds. A very important point to understand is, while there are technically six different rounds of seeds below the 10 seed, most of those are filled by the lower level conference champion automatic bids. Last year, 22 of the remaining 32 spots from 10-16 seed were automatic bids. (Note: for anyone counting, there was an 11-seed play-in game, so there's your plus-one.) So, understanding that, Baylor was competing with everyone ranked above them in that 46-66 RPI threshold for those last ten spots. Not a favorable stance for the Bears.

At that point, the assumption of just get 5th in the conference could be made and WVU would be fine. Yes, that's true, but the actual point would be missed. Everyone in the Big XII that has been mentioned and verified as a tournament team had a RPI above 50. Looking at the rest of the country, the 50s for RPI seems to be the hurt locker. Let's check it out last year's RPI starting at 51. 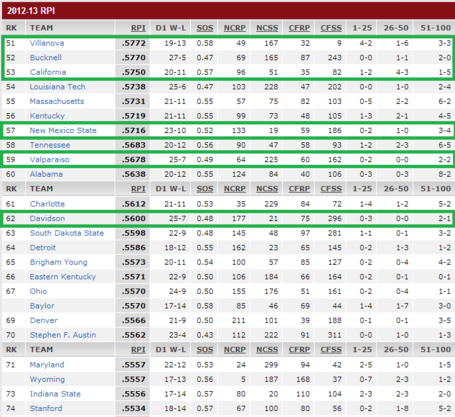 The only teams higher than this group in the RPI that didn't get in were UConn (postseason ban) and Southern Mississippi who were 0-5 against the RPI Top 50 including losing to Memphis in their conference final. Bucknell, New Mexico State, Valpo, and Davidson were all conference champions which means Villanova and Cal were your "last two in." With those two cases, you can sorta-kinda see what got them in, but the margins are close. Villanova went 4-2 against RPI Top 25 (one of those wins vs. Kansas on a neutral site) with a tough Conference SOS going 10-8 in the Big East. Cal got an invite because they only had one bad loss and a 12-11 record in a decent conference. The Bears didn't have anything really going against them, so they got the dance ticket. The 1-5 looks bad, but the SOS drops off so much below theirs... they're in by default. The rest of that list? Your 2013 NIT headliners.

Right now, the Mountaineers would be middle of the pack in the NIT. Considering how awful they were last year, this is obviously an improvement. Without the VT loss, WVU would probably swap positions with the Hokies and be in the 60s, maybe high 50s RPI-wise. The good news is that there are tons of opportunities left to get quality wins. The bad news is there are more of them on which to stumble. Just keep winning.