Mascots are just the best. This week, we have @ScottyScotsman. 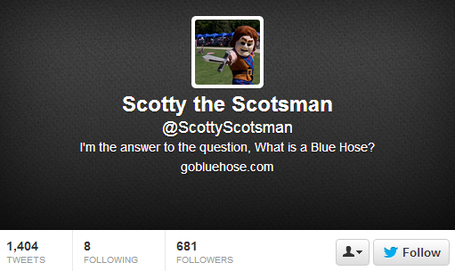 Is he Gus the Eagle? No, but still pretty interesting.

"People often ask me if anything is worn under your kilt. I say 'No, nothing is worn. Everything is in fine working order.'"

So, the Georgia Southern wasn't nearly as close as it was predicted. We aren't complaining. Love seeing the Eers dumptruck people. That's exactly what Thursday night was, a dumptrucking. In order to be considered a good team, you must blow out awful teams and occasionally beat good ones. The Presbyterian College Blue Hose is not one of those good teams. The Hose average 62 points per game and shoot 38.6% from the field. Both of those statistics rank in the 300s nationally. Presbyterian College is bad and WVU should have no trouble beating on them before making their trip to Mexico.