The West Virginia University men's basketball team welcome the Georgia Southern Eagles to Morgantown for the first game of the 2013 Cancun Challenge.

@GustheEagle, whoever it is, is great 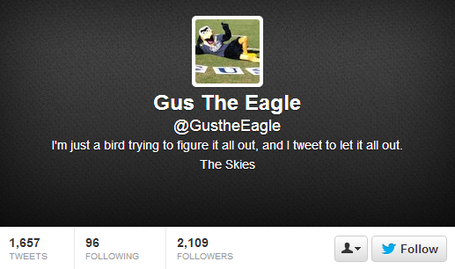 This guy can stay.

Georgia Southern is pretty decent for a Southern Conference team. By decent, I mean that they are able to dumptruck lesser teams (both their wins are blowouts) and just about beat the Canes in Miami. A big part of what makes them dangerous is that they shoot very well when open. That's the key to this game. If WVU can get out in front of GSU guards Tre Bussey and Jelani Hewitt and contest shots, the Mountaineers will have the advantage. Got a feeling that this will be a shootout, so strap in and bet the over.