One of my all-time favorite Mountaineers Marc Bulger stopped by to talk about the blue and gold glory days, our shared hatred of Pitt and his upcoming appearance on The Golf Channel's "Big Break NFL Puerto Rico."

Share All sharing options for: Interview With Mountaineer Great Marc Bulger Who Will Be Appearing On The Golf Channel's "Big Break"

Before there was Geno Smith, there was Marc Bulger. The Mountaineer signal caller set the standard for passing in Morgantown, notching record career and single game marks for yardage, touchdowns and completions - all records he held until some guy name Geno came to town. He was one of the first to put the 'touchdown' in 'Touchdown City.'

Marc was kind enough to stop by and chat with us about the good ole' days and his upcoming appearance on the Golf Channel's 'Big Break.'

Smoking Musket: Really great to talk to you Marc. I was in school about the same time as you and have great memories of some of those late 90s Mountaineer games. The crowds could get nuts. If you had to pick a couple, which games stick out in your mind?

Marc Bulger: There were two big ones that stuck out. First the Ohio State game (home opener in 1998). They were #1 that year and it was the opener and there was just so much build up the entire offseason. But that was such a stacked team with David Boston and Joe Germaine and unfortunately we lost.

The other one was the Marshall game the year before. It was the opener, too and with having never played and the rivalry there was a crazy atmosphere leading up to that one. They had Randy Moss, Doug Chapman,Chad Pennington.

TSM: Oh, I remember. We were way up and then they came back.

TSM: Then they came back and took the lead in the 4th. I remember turning to my buddy and saying "man, I never thought I'd see Marshall leading us on that scoreboard."

MB: Haha, yeah. Another one was that '98 game where we beat Pitt up at Three Rivers Stadium (52-14). That was great. I threw like 6 touchdowns - I just wish Don Nehlen had left me in so I could have thrown about 8. Man I hated Pitt. You can write that. I hate Pitt.

TSM: Gladly. We can certainly support that.

MB: I grew up right there. I went to high school at Pittsburgh Central Catholic, basically on their campus, like 2 blocks away. My coach took some of my tapes over and nobody there would look at them. I see (then Pitt coach) Johnny Majors now - he's a great guy - and he's like "what the hell was I thinking!" But in his defense, I don't think his assistants even took those tapes to him. I won't say their names here, but they found themselves out of football not long after. So anytime we played Pitt, I really liked to stick it to them.

MB: (laughs) Yeah, I enjoyed those. Poor Walt Harris (took over as Pitt coach in 1997) was probably thinking "Jesus, what did they do to me?" That's OK, I wouldn't have gone there anyway (laughs).

TSM: So on the other side, what are the games that stick with you? Which ones would you like to have back?

MB: That Ohio State one for sure. That was a really tough one to lose, I'd have loved another crack at them. So that one and really the entire 1999 season.

TSM: That was a team good team from what I remember, but it just didn't work out for you guys. What happened?

TSM: Given what's happened this year, that's something fans would probably be really curious about. As you probably know WVU is replacing their entire 3 man interior of the line. As the quarterback, what are the problems that come with having a completely re-vamped offensive line?

MB: You can plug one guy in. 2 max - really about 1.5 guys - yes I realize that doesn't make sense, haha. But the quarterback becomes really close with the line. It's a unique relationship that takes time to build - those guys have your back whether you're in a game or on High Street. You really get to know each other. But when everybody's new, they're just worried about doing their job and figuring things out. They're just trying to build cohesion with themselves. It's an intangible thing and kind of hard to explain, but I'm telling you it really matters a lot.

TSM: So tell me about the Big Break. I watched a preview and a little of the first episode, but I confess I don't know much about it.

MB: I didn't know much either before they called. It's really cool. They've got teams of 6 guys and 6 girls - one of each on a team - and they compete for a tour exemption. This one is a reunion show, so these are contestants who've been on before. With it being the 20th season, they wanted to do something special, so they joined with the NFL. Chris Doleman, Al Del Greco, Mark Ryipen, Tim Brown, Jerry Rice and myself. There's a cash prize for the winning team of $50,000.

MB: Also for the NFL player on the winning team, they're donating $50,000 to the charity of our choice and all 6 of us get $10,000 no matter what. I've always been a huge supporter of first responders and the military, so for me it was a no-brainer. My charity is the Marine Corps Scholarship Foundation. I also decided I'd personally match whatever the donation ended up being, so it will double the donation to that charity. 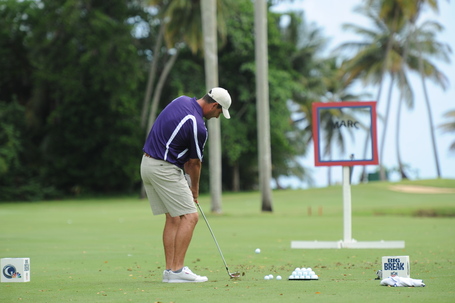 TSM: That's awesome. Sounds like they do good work. Have you been pretty involved in charities?

MB: Yeah. I actually have a charity I started myself - The Marc Bulger Foundation. But I figured it might look kinda funny me playing for a charity named after myself, haha.

TSM: So I was watching part of the first show and Chris Doleman comes out and the guy on his team starts in with "Hail to Pitt!" Did you give Doleman some crap?

MB: Well Doleman is a bit older than me - he was on those early 80s teams. I didn't have much of a problem with them, I just hated them into the late 80s and 90s. Also he's a lot bigger than I am. But I did represent the Mountaineers. I'm wearing a WVU Final Four hat in the promo. But I was on the purple team, so it made it hard to promote too much.

MB: I did accidentally give a little grief to Tim Brown. I grew up a big Notre Dame fan and remember being excited when I was 10 years old watching him win the Heisman. So I'm telling him about this and Jerry Rice and some of the other guys are standing there and they start giving him all this crap "man, you're OLD!" Those guys were great. It was really awesome and got very competitive - those guys are some fantastic golfers.

TSM: So you're a pretty good golfer though, right?

MB: Yeah, I'm decent. I'd play in the spring when I was playing football, but now I get to play a lot more. I learned playing a little local course near where I grew up. It was like $30 for a summer pass, so my parents would drop me off in the morning and then come pick me up at lunch. They figured that was a pretty good rate for child care (laughs).

It wasn't much. The tee boxes were actually asphalt with some mats. You'd have to bite off your tees to get them in, and when you were done you had all this black stuff all over your clubs. But it gave me a chance to learn the basics - get my swing down and such.

MB: Yeah, real nice. I live in Florida now so with the weather I can get out more - I play once or twice a week. I played a lot to get ready for the show. Except I found that when I started playing every day, somehow I got worse. My handicap is like a 2, then I play every day and it becomes like a 5. I'm thinking "how does this happen?"

TSM: Man, I've found the exact same thing. Back before kids I could get out a couple times a month and I was just horrible. Now I don't touch a club for 6 months, I go out and I'm a somewhat competent player. I never knew the secret was not playing.

TSM: So where did they do the show?

MB: We were in Puerto Rico for 2 weeks back in June. it was at the Dorado Beach Ritz-Carlton.

MB: (laughing) Yeah, it was pretty nice. But I'll tell you - not to complain about being in Puerto Rico - but those were some long days. You'd meet at 5:30 for breakfast and they'd have you there until they got what they were looking for - we learned to give them what they wanted quick. So then you'd be playing all day and if you made it to the next round you'd have to hang around for a few more hours while they arranged production and then be back at it that afternoon and evening. It could be like a 15 hour day.

We brought our families though, so it was pretty nice. My wife was about 6 1/2 weeks pregnant at the time, so she really enjoyed it.

TSM: If my math is right it sounds like you have a newborn. Congratulations!

MB: Thanks. It makes for some pretty long nights, haha.

TSM: Real quick question back to football. You were one of the more accurate passers in Mountaineer history. Do you watch this WVU offense today and think "oh, man I would have killed it in that system." Because personally I think your records should be weighted. People don't realize that a 429 yard game in a Don Nehlen system was like 700 somewhere else.

MB: (laughs) Yeah, I don't really understand The Pistol or some of these new systems. It's more of a college system to me. I just see a bunch of dinking and dunking and it....ah, just doesn't do much for me. But whatever.

TSM: So are you a big fan? Do you watch much WVU ball?

MB: The Mountaineers are my only team in any sport now - I'm a huge WVU guy. I watch games when I can. I went to an alumni function at a bar in Tampa for the Maryland game - that wasn't much fun. But I flew to Austin last year, that was awesome. I had a blast. If they make it to one of the bowls in Florida I'll try to get out there. I'll be going to some basketball games too - I think there's a game in St. Louis.

TSM: OK, last question. I have to ask - can you beat your sister in basketball?(for those that don't remember, Marc's sister Kate was a star for the WVU women's basketball team and is 4th on the all-time points list)

MB: Hahah. Man, definitely not now. Back in high school maybe, but I just can't play basketball anymore. Getting too old.

TSM: Tell me about it. I go out to just shoot - not a game mind you, just shoot - and my legs get sore. It gets away quick after 30.

MB: I know, right? I went out and played 36 holes the other day and I was hurting. It was like I just played a football game.

TSM: Hey we really appreciate you stopping by, it was fun.

MB: My pleasure, I enjoyed it.

Be sure to check out The Golf Channel's Big Break NFL Puerto Rico where Marc competes against 5 other teams. It premiers Tuesday, October 8, at 9 Eastern.

Also here are links to both the Marine Corps Scholarship Foundation and The Marc Bulger Foundation. Check 'em out - they do great work and help out a lot of people.