The West Virginia University men's basketball team travels to Austin for their first Big XII Conference away game in the Frank Erwin Center on Wednesday night.

Whilst researching the WVU-UT game, I came across an article on vegasinsiders.com going over teams with the best and worst ATS (against the spread) records and their matchups this week. Unfortunately, WVU was mentioned and turned out to the practically the main feature.

West Virginia Mountaineers (2-8-1 ATS, 0-5 ATS L/5) - Things look to be down in a big time way for "Huggy Bear" in Morgantown with the Mountaineers cashing at a bankroll depleting 18 percent clip. Now granted, the schedule has been stiff, but when taking a gander at this squad's offensive stats, they're beyond bad. The team is shooting 39.9% from the field (#300) as well as 28.7% from beyond the arc; has Kevin Pittsnogle run out of eligibility? The Mounty's don't stand a chance in the high flying Big 12 if these woeful shooting percentages continue. Thankfully it runs up against the offensively challenged Texas Longhorns and Kansas State Wildcats this week, but I still don't think they win let alone cover either clash.

Several things irked me about this writeup. First of all, it's the Eers. Not Mountys. With that... seriously? Kevin Pittsnogle? A six year old reference? 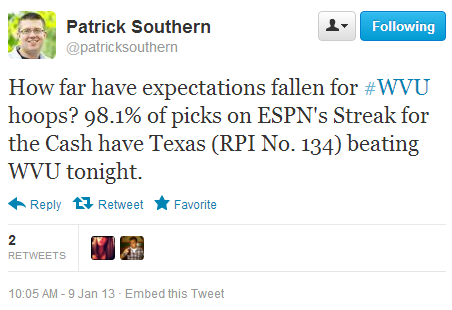 As an avid SofC fan myself, I figured I'd take a look....

WVU came out shooting against OU and completely lost their composure in the second half. That win hurt.... it hurt enough for me to rant about it on the podcast. This time, the Mountaineers are on the road that any WVU team of the last five years would walk out with a win. The 2012-2013 Mountaineers, however, aren't as trustworthy. The spread for tonight's matchup in Austin have waivered between 6 and 4.5 in favor of the Longhorns and that fact is due to the scoring capability of Sheldon McClellan. This sophomore guard averages almost 16 points a game and, along side freshman guard Javan Felix, is on the court most of the game.

While this Longhorns team has had a rough season already with a loss to Chaminade, they are undefeated on their home court with a win against North Carolina who are struggling now with a loss to UVA. UT needs this win just as badly as we do, so expect a battle on the boards and a struggle with field goal percentage.

One huge key for WVU is to attack the Longhorn big men. They have a deep bench of centers and forwards that are all young and give up fouls. If the Mountaineers can made Texas start bleeding fouls and actually take advantage of the free throw stripe, West Virginia can stay in this game. This could be the one way they can keep putting points on the board while the inevitable stagnant offense stalls in the second half.