The Mountaineer men's basketball team open up their Inaugural Big XII conference season on Saturday with a rematch against the Oklahoma Sooners.

Kickin' It with Sam Grooms

OU junior guard Sam Grooms seems to be an interesting fellow. He averages around 17 minutes a game and contribues as most point guards do via distribution of the ball. When he's not playing in that afternoon's game, however, Sam does his own thing. 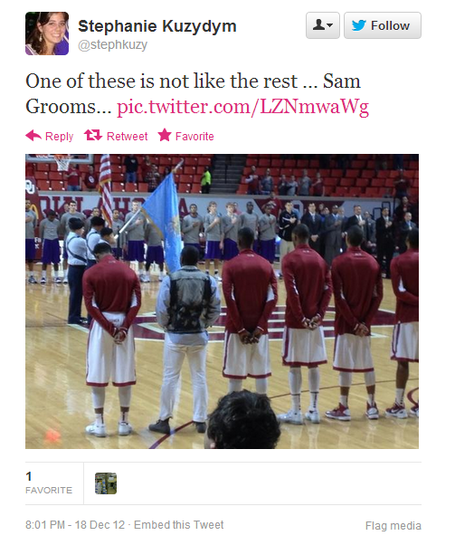 That's your boy, Sam Grooms, rocking a denim vest during the playing of our Star Spangled Banner. I can neither confirm nor deny a bow tie being work by Mr. Grooms, but I can say that the guys at Crimson And Cream Machine need to help the kid out with some fashion tips and not let him out of the house in a near-Canadian tuxedo.

Last time the Mountaineers faced off against the Sooners, OU was lead by freshman guard Je'lon Hornbeak and junior forward Amath M'Baye for a combined 33 points to outlast WVU 77-70. The source of the Mountaineers undoing was the abysmal 36% field goal shooting percentage that as continuously plagued this squad all season long. Luckily for the 284th field goal percentage ranked Mountaineers, the OU Sooners are only 237th while averaging only 41.8% from the field. Get ready, folks, because that means this is going to be a classic Bob Huggins defensive battle with both teams averaging no more than 70 points per game.

While the Mountaineers come into this game after a healthy three game home winning streak of nonconference opponents, WVU needs to rack up as many conference wins as possible... especially at home. Oklahoma ranks around the 25-28 mark in RPI and a win against the Sooners would be a huge confidence boost for everyone involved, including the fan base.

It's worth noting that if you are in town, you should try to go to this. The Mountaineers need all the help they can get with home court advantage and these kids truly do feed of of the Oliver Garden energy. WVU is going out of it's way to make it quite the event.

"The West Virginia University men's and women’s basketball teams will each play their first Big 12 Conference home games this Saturday at the WVU Coliseum. It's a Gold Rush presented by EZToUse.com- fans are encouraged to wear gold.

Lastly, the key to this game will be inside play with M'Baye and Osby inside along with covering the inside-out pass to Steven Pledger. This Pledger kid is unreal shooting 42% this year and leading the Sooners three-point attack by a lengthy margin. That being said, Osby is still the main threat with great ability around the basket armed with sound free throw shooting. This is going to be a hard fought game, but if WVU can capture a win, we can all look ahead to the conference schedule with a little more hope for March.