The West Virginia University men's basketball team are home again in the Oliver Garden to take on the Horned Frogs of TCU.

Share All sharing options for: WVU - TCU Preview: Must Win

Senior Forward Adrick McKinney is the type of Twitter follow that drives you insane filling up your timeline with instagrams literally every day. Not only does he tweet stuff like "GQ status", but also backs it up with this kind of wardrobe. 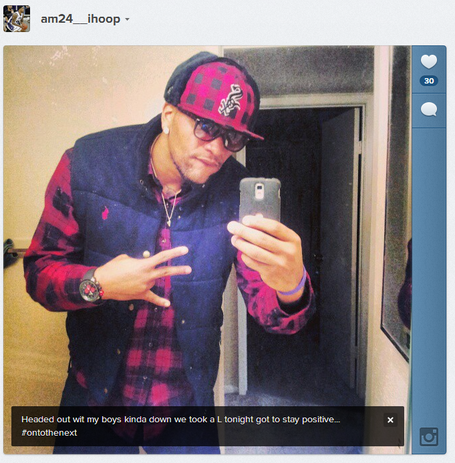 It probably warms the heart of TCU faithful that their boy is staying positing after the L they took especially considering that he went 1-7 that night from the field in a loss to Baylor. This, however, doesn't bother me. Someone's gotta tell my man here that the pinkish-maroonish plaid with a vest and a matching White Sox hat is not a good look. Also, does that damn hat have fuzzy earmuffs? Is that what the kids are wearing these days?

I've made an internet-living off of defending the Mountaineers in both football and basketball. I was the one that said there were good things to look at on our defense last year and that they were causing turnovers. I was the one that said that there was no way WVU was going to go out and lay an egg against KState on national television (same link.) While this skid that the basketball team is in is completely different than dropping five games in a row during football season, my points are starting to go thin in defending them. That Purdue game was so bad, that I didn't even want to go into the details on the podcast. All that aside, there is one certainty: if WVU loses this game tonight at home against a conference winless TCU side, we can pronounce the dream of WVU continuing the March Madness streak dead at 10:30pm, January 23rd, 2013.

That being said, it's not like WVU is playing much better than TCU. We have all seen glimpses of something working.... but then again we just got killed by Purdue, a team that doesn't exactly have a sparking resume. I'm willing to say that the state of Indiana is just WVU sports hell and the traveling might be starting to get to us.... but there are no excuses tonight. The Mountaineers have had a few days off and are playing at home. I don't care that we are young. I don't care that our bench is inexperienced. I especially don't care that we have one of the worst shot percentages in the country. We need this W for a whole ton of reasons, one being that is sure as hell doesn't get any easier.

That all being said, WVU must do two things to beat the Horned Frogs: Limit points by either Kyan Anderson / Garlon Green AND keep Adrick McKinney off the boards. Anderson and Green lead the Horned Frogs backcourt and average 20 points between them. Considering this TCU team averages 55 points, if you contain either one of those guards, 20% of their offensive production is gone. The second key to the game is to limit McKinney, the TCU leading rebounder, from causing second chances on offense and take away those same opportunities while WVU is continuously missing shots. If McKinney goes out of the game early (preferably due to fouls) and can not grab is usual seven, the good guys should be able to coast. I'd love to say that we should see Jabarie, Terry, and Eron control this game, but I don't have the stomach to guarantee it after the most recent lack of performance in West Lafayette.

Prediction: The Mountaineers get a much needed win at home while obviously not covering because WVU......WVU 67 - TCU 60