Join us in running commentary as the Mountaineers travel to Ames to take on the Iowa St. Cyclones in the inaugural Riot Ball.

Bob Huggins leads our Mountaineer cagers into Ames, Iowa, tonight to take on the Iowa State Cyclones in the first edition of the hardwood Riot Bowl, that we have since dubbed the Riot Ball, with the winning SBN blog (us and WRNL) getting rights to claim this image as their own: 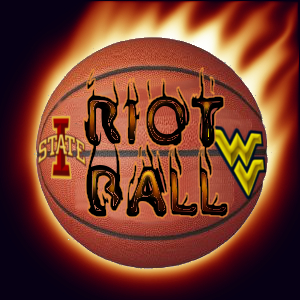 While the Mountaineers are looking to build off their improved (if in a losing effort) against Kansas St, they will have their hands full with the high scoring Cyclones, who have hit the 70 point mark every game thus far this season. As if that isn't enough, Terry Henderson, one of the lone bright spots for the WVU offense, is still in Morgantown with back problems (believe me, I can relate...it sucks).

Television coverage is being provided by ESPN2 and ESPN3 at 9 pm ET. So, find a comfortable spot, grab a favorite beverage or threeve, and join in on the running commentary, random observations, silly images, snark, wit, bitches, complaints, moans, groans, cheers, celebration and jubilation in the comments section below.