Share All sharing options for: The Shotgun/Throwdown: Tuesday (8/21/12) Edition 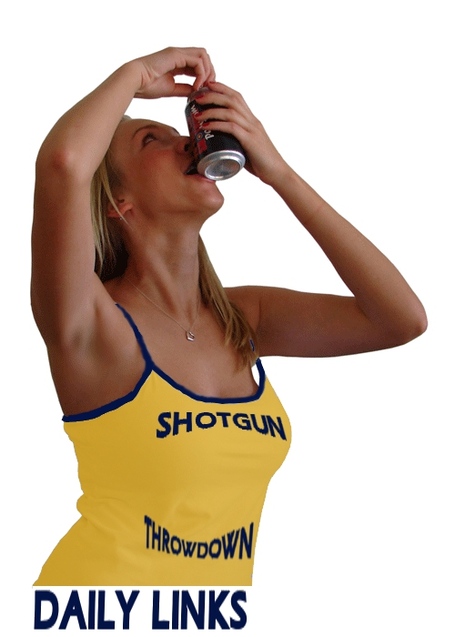 The initial depth chart is basically set with very little, if any, surprises. The defense is discussed at length today, specifically in how it plans to counter the Big 12 practice of running non-targeted consecutive verticals to wear out the DB's and then put the number one guys back in to burn them. The men's soccer team has a pre-season ranking and we also have the initial Varsity Sports Report of the semester. All of this, your Big 12 roundup and more...

Why would Hardesty threaten Dakich in 2002? - Charleston Gazette
Hargett is back in the West Virginia consciousness thanks to a story by Pete Thamel in the New York Times over the weekend.

Depth chart just about set for WVU - Charleston Gazette
And there are virtually no surprises for anyone who followed the movements on that chart over the two-plus weeks of preseason camp.

WVU football: WVU must get familiar with more than a map - Charleston Daily Mail
To review, an offense, and to hear DeForest tell it, any offense, will put a few receivers on the field and have them run deep routes a few times in a row. The ball may never go deep, but the cornerback has to cover, which creates a separate set of problems underneath that coverage.

DeForest Molding A Young D - WVUsports.com
Co-defensive coordinator Joe DeForest said the Mountaineers may have to make do with several young players in this year's two-deep.

WVU defense braces for high-powered Big 12 - Pittsburgh Tribune Review
"You want to be a great scoring defense," Patterson said. "You may give up some yards, but the bottom line is scoring more points than their offense. We don’t want to give up 35-40 points a game, but you want your defense to complement your offense. We’re going to be more aggressive on defense to give the ball back to our offense as much as possible."

Mountaineers feature plenty of depth at receiver - Daily Athenaeum
Highly skilled and returning plenty of veteran hands, the 2012-13 edition of the Mountaineers’ offense is equipped with one of the top receiving corps in the Big 12 – if not the country.

Woods looking to contribute in final year as a Mountaineer - Daily Athenaeum
J.D. Woods’ career as a member of the West Virginia football team has been a roller-coaster ride, to say the least.

Future bright for WVU after 2012 - Daily Athenaeum
The results of losing all three of WVU’s most dynamic and prominent offensive threats next year would be detrimental, to say the least. But it’s not the death sentence that many people are asserting.

The Great Rivalry Debate - WVillustrated
There is no debate, among the sane

Coach: DE commit 'can be a real dominant player' - WVMETRONEWS.COM
West Virginia's latest football commitment — four-star defensive end De'Asian Richardson of Orange Park (Fla.) High School — has the athleticism to play wideout for his prep team, even as he climbs toward the 300-pound mark.

Big 12 preview: Two additions mean this league race should be most entertaining of them all - Yahoo! Sports
The league's two additions should spice things up this season.

Harsin: Both Quarterbacks To Play Against Wyoming - Burnt Orange Nation

Today's Miss Throwdown is an Aussie with anything but a Buttface. CLICK HERE for today's gallery of Erin McNaught.