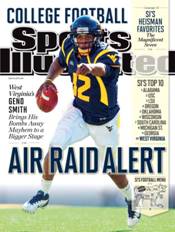 Again, sorry for the delay from the usual time, but plenty to go through. We have more on the new guys, SI previews, Big 12 roundup, WVUPros and much more...

Huff can’t wait for WVU-JMU game - Register-Herald
Huff, whose No. 75 is one of only two retired numbers in WVU football history, will be honored during the Virginia 529 College Savings Classic on Sept. 15 when the Mountaineers meet up with James Madison University at FedEx Field, the home of the Washington Redskins.

Is Brandon Hogan Close To a Return For the Panthers? - WVU Pros
Brandon Hogan has missed the last couple weeks of Panthers' practice. Is he close to returning?

WVUPros NFL Preseason Week 2 Preview: Thursday - WVU Pros
We take a look at three former Mountaineers who will be in action on Thursday night.

Alston Stays #1 at Running Back - WVMETRONEWS.COM
“Shawne has carried the momentum that he had over from the Orange Bowl and from the spring,” Gillespie said Wednesday morning. “He’s still the lead dog.”

Spain likely a starter for WVU - Register-Herald
“Last year when they moved me to the right side, I thought I really had to compete. But this year, I moved to the left tackle position and have been there awhile.

Rick Rumph Follows Path to Success at WVU - WVillustrated
Freshman cornerback running with the twos after taking a difficult road to reach Morgantown.

Mountaineer freshman corner is a late bloomer - Charleston Gazette
At first glance, Ricky Rumph might be one of the nicest guys you'll ever meet in college football.

Secondary To Feature First Year Talent - WVMETRONEWS.COM
“At least four to five corners to go into a game because of the tempo,” he said.

Frosh Kyeremeh shows off unique skills - Times West Virginian
In early workouts this summer, the former Thomas Worthington standout from Worthington, Ohio, a suburb of a city football fans know something about called Columbus, has flown quite high while keeping his feet planted firmly on the ground.

Thompson looks to contribute this season - Inter-Mountain
"They want to get a clean shot at me to see how tough I am," Thompson said.

Woods works way up the ladder - Charleston Gazette
With academic woes behind him, WVU receiver strives for consistency

WVU Lineman Curtis Feigt Catching the Eyes of his Coaches - WVillustrated
In his second year of playing right tackle, Feigt is starting to fully understand his position.

Quoting The Coaches: Day 12 Of Practice - WVMETRONEWS.COM
more from the assistants

Weis hiring seen as a bit risky by analyst - KUsports.com

Oh where, oh where, has all the talent gone? - Cowboys Ride For Free

Is Texas Going To Use Two Quarterbacks This Season? - Burnt Orange Nation

Alabama self-reports 27 secondary violations to NCAA - SI.com
Before you get excited, only 4 in football

The WVU Football Fan Day was held Sunday, August 12, 2012. More than four thousand fans came out to get autographs and have photos taken with their favorite Mountaineer players and coaches.

Today's Miss Throwdown is a favorite in these parts. CLICK HERE for today's gallery of the lovely Belen Rodriguez