Share All sharing options for: The Shotgun/Throwdown: Tuesday (7/31/12) Edition 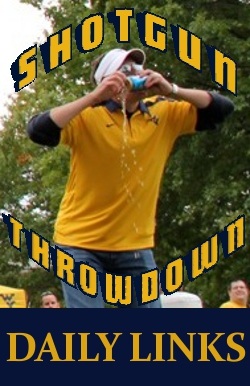 As fall camp is preparing to get underway, we have several recruiting updates and articles to go along with several player features. We also have several articles relating to the hype heading into this year. WVUPros gives us an update on what Truck has planned for his post-collegiate career. The final financial details with the Big East have been released and the usual Big 12 roundup is included and much, much more...

Programming Note: The Shotgun/Throwdown is back to (week)daily starting Thursday.

G&BN: A Stedman Rhoads To Travel - WVMETRONEWS.COM
In Tuesday's edition of Gold and Blue Now we visit with Stedman Bailey who is excited about the young receivers on the team, Iowa State Head Coach Paul Rhoads talks about WVU competing in the Big 12 this year and we find out about the 2012 Dana Holgerson Show.

Mountaineer fall camp will be very limited to media - Register-Herald
According to the announced media schedule, just five days will be open to the media. And that will be from 5-5:30 p.m. — a mere 30 minutes each session.

College Football Science: Where Your Team Ranks On The Fun/Skill Chart - SBNation.com
In order to better understand college football's major conferences, we must plot each according to its Fun and its Skill.

Is WVU too hyped or underrated? - Parkersburg News and Sentinel
A team is only as good as its last game.

The Top Ten Most Underrated Programs In College Football - Crimson And Cream Machine
They like us, they REALLY like us

Jim Harbaugh: Randy Moss isn't 49ers' top receiver - NFL.com
Check out the hat, thanks to Brendan for the tip

Geno Smith's unique advantage in the 2012 Heisman race - CBSSports.com
Indeed, it appears conference realignment has set the stage for the West Virginia quarterback.

A Bigger Geno in 2012 - WVUsports.com
After performing last season at about 205 pounds, this year Smith plans to weigh around 225 when the Mountaineers open the season on Sept. 1

Bailey wants to be better - Martinsburg Journal
"You always would like to show improvement every season. And I hope to be better this fall.

One position surely up for grabs: WVU running back - Charleston Gazette
Who emerges will be interesting to watch between now and Sept. 1 when Marshall makes its last trip to Morgantown.

Defenses can't be overlooked in Big 12 - Charleston Daily Mail
The Big 12 Conference has a reputation for outstanding offenses, quarterbacks and receivers that is as earned as it is impressive.

HERTZEL COLUMN: WVU defense ready for leap into Big XII - Times West Virginian
This defense is a more daring, more gambling defense, one in which they will play far more man-on-man defense, being left alone on an island with no Ginger or Mary Ann to make it enjoyable.

Kicking game will be crucial for WVU - Charleston Gazette
Not only does West Virginia begin practice Thursday with a rather, shall we say, inconsistent group of kickers, there are also new rules to follow.

Worley: "I'm a Mountaineer!" - Scout
Daryl Worley completed a visit to West Virginia by committing to the Mountaineers, and the William Penn Charter (Philadelphia) standout then spoke with FOXSportsNEXT about it.

Maryland Wideout Daikiel Shorts Commits to WVU - WVillustrated
Wide receiver pledges with Mountaineers, making it two commits in one day and a total of 11 for 2013.

After Big 12 move, WVU won’t be shy about recruiting in Texas - Pittsburgh Tribune Review
“Yes, we will recruit Houston. We will recruit Dallas. I think we’ve got to be careful about how much manpower we put (there) because it’s so competitive. Like I said, everybody’s recruiting this.”

Has The New Big XII Gained Ground On The SEC? - Crimson And Cream Machine

After Eric Ward's breakout year in 2011, others trying to follow suit - Red Raiders

Football: Single-Game Tickets On Sale Tuesday - WVUsports.com
Tickets can be purchased online at WVUGAME.com, by calling 1-800-WVU GAME or in person at the Mountaineer Ticket Office in the WVU Coliseum.

Dana Holgorsen Statewide Sportsline Set - WVMETRONEWS.COM
The show will once again air from 7:06 until 9:00 P.M. on Thursday nights throughout the state live from the Regatta Bar and Grille at the Waterfront Place Hotel.

Today's Miss Throwdown is a VS Angel and ANOTHER of Leo's conquests (DAMN YOU LEO!!!). HERE'S today's gallery of the lovely Miss Erin Heatherton.