The ONE Football Statue...Who Would Be Yours?

Share All sharing options for: The ONE Football Statue...Who Would Be Yours? 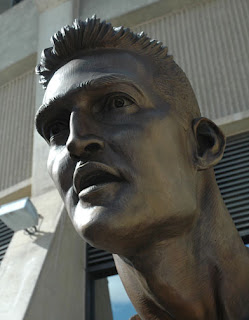 Sports Illustrated has a photo gallery featuring schools with bronze statues of their football icons. In my judgment, honoring our past heroes is something that WVU has not done well. We apparently only have two basketball players (West & Hundley) and two football players (Huff & Rodgers) that are worthy of recognition within our arena/stadium. Jerry West is the only actual person with a statue (I'm not counting the Mountaineer Statue outside the Mountainlair).

Which led me to ask, "If I HAD to put one person on a statue outside of Mountaineer Field, whose would it be?" This is not a new discussion, but the SI photo gallery got me thinking that most of the debates along these lines seem to ask "Who are your top 5?" I want to know who you think is the most important/influential person in Mountaineer football history.

Even though there is not a National Championship title or the title of All-American attached to his name, I'd have to give the honor to Don Nehlen. While he did win Coach of the Year awards in 1988 and 1993, and had a career record of 202-128-8, perhaps his greatest impact on WVU football (and WVU athletics as a whole) we are now seeing the fruit of: Oliver Luck. Luck may end up being the most influential of all Mountaineers when its all said and done (assuming the Big 12 proves to be a winning move - which I assume it will).

Luck loved Don Nehlen when he played for him and he still does. Nehlen's 20-year tenure at WVU brought our football program onto the national stage as never before, and it started with a QB named Luck. And Luck has honored Nehlen at every turn.

I don't think Oliver Luck would have the love for WVU that he has without Don Nehlen.

He'd have the brains of a scholar, the degree of a lawyer, the career of an NFL QB, and the management experience to boot. However, if he'd had a rotten first experience with Nehlen (a coach who still lives in town 40 years later), I have to believe it would've factored negatively into whether or not Luck would've left the big city to come back to Morgantown.

When I think of who has made the biggest overall impact on Mountaineer football, Don Nehlen's name comes up every time.

Who is your ONE statue?