Share All sharing options for: Big Things Are Coming To West Virginia

Several people posted pictures of billboards yesterday from around Morgantown. This one comes to us via our friend at WVillustrated, Geoff Coyle. As we get closer to the start of our first year in the Big 12, it seems the hype is just going to get bigger and louder. I can't imagine anyone needs reminded that if you want season tickets you need to get on it yesterday. From all indications, this is going to be a banner year for season ticket sales. It should be with so many great home games. But that is what the sign is about. So get on it.

It seems Marshall has a billboard of their own. The Herd thinks big things are coming for them as well. It was announced Monday that Marshall will have the services of two new safeties via Boston College. Both Dominick LeGrande and Okechukwu Okoroha were set to be starting safeties for the Eagles in 2011, but both left the team before the season after Okoroha was dismissed for disciplinary reasons. The Eagles were ranked 76th in pass defense in 2010 when both were reserves and ranked only slightly worse in 2011 after both left the team. So maybe this isn't as big a get as Marshall thinks. We'll certainly find out September 1st.

About that Marshall billboard, follow me after the jump. 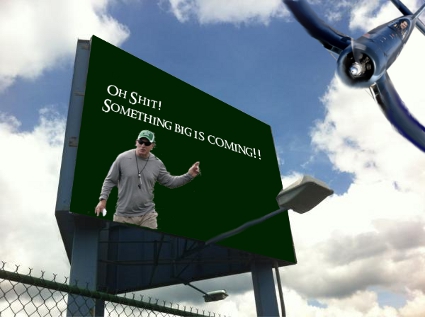 Ask not for whom the air raid tolls, Doc Holiday. It tolls for thee.