Share All sharing options for: The Shotgun/Throwdown: Friday (6/1/12) Edition

Welcome, By-Godders, to the Shotgun/Throwdown, WVU's nationally recognized best place for sports links, information, sophomoric humor and daily distractions. We're being brought to you today by Nebraska Brewing's Brunette Nut Brown Ale (you can insert your own sophomoric joke here).

Today we get a heavy dose of baseball program updates. We have several updates on the proposed stadium and the ongoing coaching search, which, it seems, won't be completed today as previously hoped. Plenty of ongoing outlooks for football and a couple of opponent previews/school intros, and a couple hoops notes too, to go through as well. The Big 12 meetings are rolling along, with public denials of being interested in expansion (for what that's worth). We have other news from around the league and updates on KJ and Bruce as well. Have a great weekend everyone!!

Gold And Blue Now: Friday - WVMETRONEWS.COM
In Friday's show, we talk the future of the Big 12 and if it's possible Florida State will join the Big 12 Conference.

2012 West Virginia Preview: The Big Move - College Football News
Congratulations, West Virginia. You made the big move up to a bigger, better conference. Now win it.

Can West Virginia win national title in 2012? - Big 12 Blog - ESPN
Our ESPN.com series marched on this week, looking at the 20 teams who could win the national title this season.

What A Difference A Year Makes - WVillustrated
One year ago WVU was fully supportive of the Big East. Now it is preparing to officially join the Big 12.

Questions remain on WVU baseball stadium financing - Charleston Gazette
Those plans are progressing, but with some major questions to be answered.

Commissioners Set Public Hearing for Ballpark Project - WVMETRONEWS.COM
WVU Athletic Director Oliver Luck has been pushing for the stadium ever since the Mountaineers joined the Big 12.

Update: WVU Interviews More Candidates - WVMETRONEWS.COM
UPDATE: WVU Athletic Director Oliver Luck may take more time on the search for a new baseball coach than he originally anticipated. According to multiple sources, Luck first wanted to make his decision by the end of the week, but now may take more time.

Seattle Seahawks Turn Bruce Irvin Loose At OTA's - WVU Pros
This season, Irvin is expected to fill the role vacated by Raheem Brock. That is, as a backup at defensive end and a regular on passing third-downs.

Season tickets sales now over 30,000 - Daily Athenaeum
It’s amazing what a BCS bowl victory and a move to a new conference can do to get fans excited for the next season.

Big 12 focus of WVU athletics - Bluefield Daily Telegraph
It is a new adventure, a new opportunity for WVU athletics and most of the focus is on the football program and head coach Dana Holgorsen.

Is WVU the Boise of BCS level? - Charleston Gazette
Really, for the past seven or eight years, since Miami and then Virginia Tech left the Big East and went off WVU's schedule, have the Mountaineers been a kind of BCS-level Boise State?

HERTZEL COLUMN: Brawl needs place in new landscape - Times West Virginian
There are no dirty words, for example, that rhyme with Texas or Oklahoma.

Injuries wounded WVU in 1988 - Martinsburg Journal
Not only did quarterback Major Harris injure his shoulder on the game's third offensive play, but both Stroia and All-America offensive tackle Rick Philips got hurt early and missed considerable time as the Mountaineers took on coach Lou Holtz's Fighting Irish squad.

Huggins honored for giving back - Times West Virginian
Huggins has been selected by his alma mater and the school that employs him as the Outstanding Volunteer Philanthropist of 2012.

WVU Women's Basketball Team Enjoys Offseason Improvements - WVillustrated
Despite mostly familiar faces, there will be some subtle changes for Mike Carey's team in 2012-2013

Conference Realignment: What Matters in Realignment? (Post 2) - Bring On The Cats

Big 12 Wants Football Playoff With Strength Of Schedule Include - WVillustrated

Charges Or Not, Sims Needs To Go - Cowboys Ride For Free

Introducing Baylor - MSNsportsNET.com
Pravda, it seems, has begun a series to help us all familiarize ourselves with our new conference-mates

Renewal Of Oklahoma/Nebraska Game Still On The Table According To NU A.D. - Crimson And Cream Machine

Say Your Goodbyes: The ACC's Days Are Numbered - Forbes

Our own 5th Year Senior's Nuptials - Congratulations!!! (even though we still don't know what she sees in him)

These guys are good:

Today's Miss Throwdown is a BRUNETTE, Romanian model Madalina Ghenea. Here's today's gallery (click on the picture) and video for your perusal. 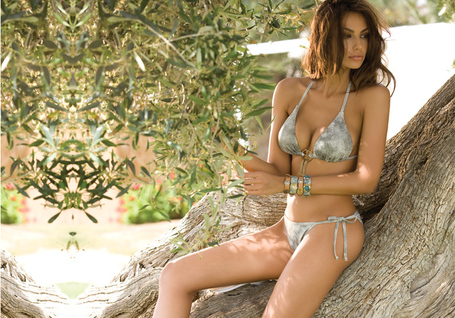