Share All sharing options for: The Shotgun/Throwdown: Friday (5/18/12) Edition

Welcome, By-Godders, to the Shotgun/Throwdown, WVU's nationally recognized best place for sports links, information, sophomoric humor and daily distractions. We're being brought to you today by Hofbräuhaus, where the food is great and the beer is better.

Today we have reactions to the Bama game, Ollie isn't going anywhere and the basketball coaches are interviewed. Athlon is also heavily featuring WVU today. All of this and more. Sorry for the delay. Have a great weekend.

WVU president says Luck's staying - Charleston Gazette
"I sat down with Oliver," Clements told the Gazette. "I told him I need to know because I've been getting inquiries, calls and texts, and he said, 'Jim, I love it here; I'm a Mountaineer; I'm staying.' "

Oliver Luck Discusses State Of WVU Athletic Department - WVillustrated
See what Luck had to say about the Alabama game, the Big 12 and his work as athletic director.

TALE OF THE TAPE: NICK SABAN VERSUS DANA HOLGORSEN - Every Day Should Be Saturday
Deliciousness, as usual, from Spencer

Holgorsen and the Mountaineer to Star in ESPN Commercial - WVillustrated
Jonathan Kimble is excited to represent West Virginia on a national scale in College GameDay spot.

Relegation Simulation: Rewriting College Football History - SBNation.com
In a series by the Mothership, they simulated EPL-style relegation/promotion and WVU came through nicely, taking care of winning the BE, ACC and now membership into the B12

Moss a productive fullback - Martinsburg Journal
The 6-foot-1, 194-pound Huntington native still holds the WVU record for both season and career average yards per carry. It was 8.2 for 1955 and 7.8 for his four-year career.

Koken was leader on WVU’s 1988 team - Register-Herald
The 6-foot-2, 265-pound Youngstown, Ohio, native was the center, and he must rank among the school’s all-time best at that position.

Pros and Cons of an Early Season 2014 Matchup: WVU vs. Alabama - WVMETRONEWS.COM
Tale of the Tape

HERTZEL COLUMN: ’Bama game comes at a perfect time - Times West Virginian
There is something about the opening day of any football season that is special, and it’s a shame when a school uses it for something other than a special game, as many do while trying to ease into the year against a lesser opponent.

Alabama vs West Virginia: WE MUST PROTECT THIS COUCH! - Roll 'Bama Roll
The reaction from our blogging counterparts

A Takeaway From ‘Bama-W.V.U. in 2014 - Pre-Snap Read
One simple takeaway from this high-profile matchup: The Chick-fil-A College Kickoff, due to enter its fifth season this fall, has become the game’s marquee regular season event.

Schedules are made to be adjusted - Charleston Gazette
Hickman's Notebook

Mountaineers to visit Gonzaga in basketball - Charleston Gazette
Oliver Luck said West Virginia is working to schedule a regular-season game with the Zags in Spokane, Wash., next season.

Huggins, Carey Speak About Future of WVU Basketball - WVillustrated
See what the Mountaineer head coaches had to say about new assistants, new players and their new facility.

DeForest Pleased With Progress - MSNsportsNET.com
"I think our kids bought in all spring and showed it in the spring game," DeForest said last month. "Four turnovers is a lot in a spring game."

WVU One of Many Interested in Florida Backer Michael Deeb - WVillustrated
Mountaineers are trying to stand out in a growing list of offers for this American Heritage Plantation linebacker.

HERTZEL COLUMN: Work never done for Big 12 boss - Times West Virginian
Bob Bowlsby, the new Big 12 commissioner who seemed to walk into a job after all the work was done

The Lockett Legacy - Bring On The Cats

This was making the rounds last week:

Today's Miss Throwdown is British model/actress Kelly Brook. Enjoy the video below and a wonderful gallery by clicking on the picture. 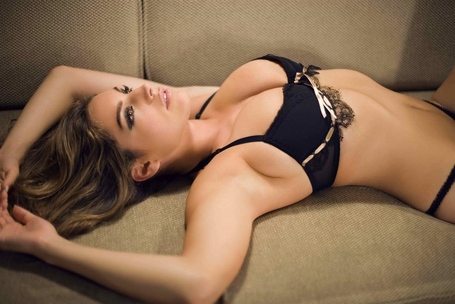