Share All sharing options for: What's Your Mountaineer 30 For 30 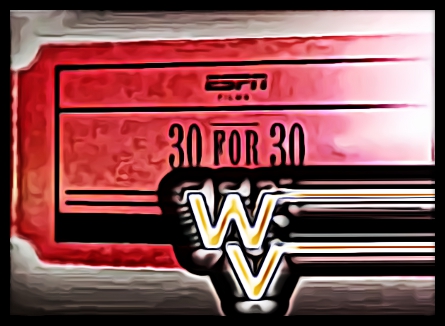 ESPN announced it will do another set of 30 For 30 documentaries. They already have a few subjects lined up like Bo Jackson, the 1983 NC State basketball team, and one called "Broke" about athletes that lost their fortune. Looking at all the great stories they put together for the first round of 30 for 30's, you'd think the announcement to do more would be followed by "duh".

So what about West Virginia University? What story would you want them to tell? Would you want it to center around an icon like Jerry West, or a team like the 2005 Mountaineer football team?

One that lives with me is the 1984 football team. It's one of my favorite years of WVU football. In a way, if you've read Waiting for the Fall by Mike Casazza, it fits the theme perfectly. Jeff Hostetler was gone and expectations were not as high for Kevin White, but they beat Penn State for the first time in 28 years. They took out Boston College and Heisman winner Doug Flutie. They beat Pitt, Virginia Tech, and everyone else but Maryland (Damn you Frank Reich!). They were ranked higher than I had ever seen them. Then lost the last three games of the regular season to teams they should have beat. Depth was an issue, and when key starters went down the season fell apart.

I throw it out there because I doubt it would be in most people's top five or maybe ten. Beating TCU was a sweet end to a roller coaster ride of a season, though. What's your Mountaineer 30 for 30?