Share All sharing options for: The Fall Down Pass Out: Tuesday (05/01/12) Edition 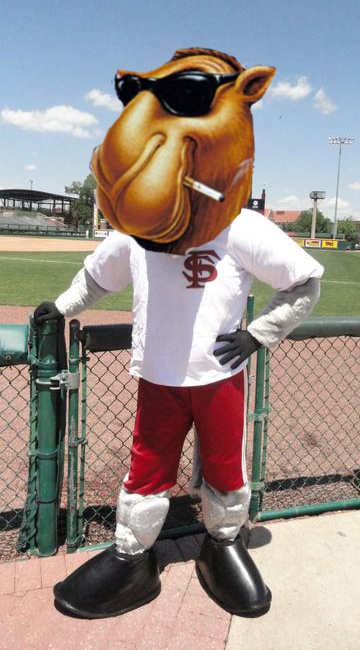 I'm getting a little tired of the Fall Down Pass Out intro. By now, everyone knows what's going on. Right? Cause there's more important stuff to get to. Florida State has revived Cimarron from the dead to appeal to the younger Seminole fans. Because the adults are already, "hooked"? I kid.

The only reason I brought the picture up is because I saw the original version on EDSBS. The reason I bring that up is because he's doing something very worthwhile. His annual fundraiser allows the school fan base with the highest donation level to have him get an unflattering tattoo or other nonsense of their choosing. Proceeds go to Refugee Resettlement and Immigration Services of Atlanta. A charity he used to work for, I believe. We probably don't stand a chance in hell of him getting the flying WV logo tramp stamp, but that doesn't mean we shouldn't donate to such a worthy cause.

Mountaineer and Big 12 Links after the jump.

Caridi to MC WVU Caravan - For the Parkersburg folks. Huggins, Holgorsen, and Barry Switzer will be in attendance.

Bruce Irvin explains recent arrest, comments on coaching - Getting everything out that people have been guessing about since Bruce was drafted.

NCAA pursues four team playoff for 2014 - More general football than Big 12, but it affects us just the same. Also, I haven't brought this up that I remember.

Baylor's Tevin Elliot charged with sexual assault- This is the kind of thing Holgorsen doesn't want this off season. Especially this. Treat the ladies like ladies, m'kay?

T. Paige subscribed to my youtube page. Very pleasant surprise for me. And of course, nice hat, T.