The Mountaineer Ring Of Honor

Share All sharing options for: The Mountaineer Ring Of Honor

There's been some discussion about a ring of honor at Mountaineer field. West Virginia AD Oliver Luck spoke of it around last year's spring football game. It's something I'd certainly like to see for a couple reasons. Number one, you have to be a water walker to have your number retired at West Virginia. Two, the WVU hall of fame doesn't reach out into the stadium. In fact, you hardly ever hear about it except when the induction list is announced. We've had some great college athletes play here. We need to wear that on our sleeve. But third and most importantly, GOOD GOD we need to spruce that place up!

The actual stadium itself has been great for us. I don't think anyone would deny that. But aesthetically it's a real nightmare. The concrete grey reminds me of that monstrosity outside the Charleston Civic Center. I still don't know what that is and if you can even call it art. As a kid, I just assumed it was an addition that was never completed.

I know the ring of honor will most likely just be the names of the players around the inside of the stadium. But as you can see from the Darryl Talley picture above, I'd like it if we did a little more. To me, though, it's not just the players. It's the placement. Before I get to that, here's my first five in the ring. And yes, I'm biased as hell.

Leave your first five in the comments

You might not find too much to disagree with there, but it did weigh on my mind to think about Grant Wiley, Kevin White, Renaldo Turnbill, Theron Ellis, Owen Schmitt, and a couple others. My own personal favorite Mountaineers. There's no real right or wrong answer. They all mean something special to this program. That's why I talk about placement.

If Pat White's place in the ring of honor isn't as close to the team entrance as possible, then something is wrong. Every day when the team walks on and off the field, they should be reminded of the benchmark that is Pat White's career at West Virginia. It's the loftiest of goals for a Mountaineer to shoot for and that's why I think it should be placed there. 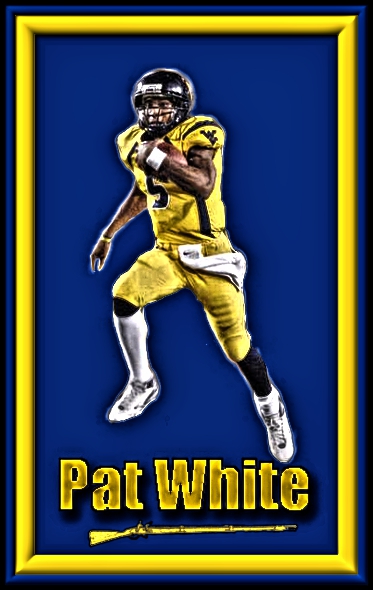 For obvious reasons, Darryl Talley's likeness should be placed right behind the opposing team's sideline. If they would choose to place that punt block picture from the Pitt game where the punters and kickers stay warm, that would be all the better. Just a simple suggestion that "You might kick that ball. But it's not going anywhere you want it to go."

Don Nehlen's likeness needs to be somewhere that every coach can see it as they practice their craft. His longevity, dedication to the program, and the way he went about it should be a reminder to every coach that passes through the program.Perhaps his whistle needs to be retired beside Sam Huff on the wall.

Sam Huff should probably stay where he is. Given that his number has already been retired, he's a no-brainer for the ring. But his marker needs to be embellished to the point that he does stand out above everyone else. The crown jewel of the ring if you will.

Major Harris was a freak of nature among freaks of nature. To the point that I would argue we and the NFL after us didn't know how best to use him. He should be right beside Pat White. His Mountaineer career ended too soon, but he was every bit the icon Pat White was while he was here. I can only imagine his status nationally if he had played during the information/spread offense age.

So what five would you put in first and where would they be placed?