WVU vs. Kansas Grades: A Festive Look At The Mountaineer's Win Over The Jayhawks

Senior Day was a rousing success, so let's hand out some grades......and have a little holiday fun.

Share All sharing options for: WVU vs. Kansas Grades: A Festive Look At The Mountaineer's Win Over The Jayhawks

We needed that. In a season defined by the most extreme of peaks and valleys - one of the biggest road wins ever one week and the most soul-draining home defeat in recent memory two weeks later - it was nice to finally watch a Mountaineer game that was gloriously free of tension. From the introduction of WVU's 21 departing seniors to the gleeful singing of "Country Roads" and impromptu Gatorade dousing of Geno Smith (by the cup), the 59-10 blowout win was a full-throttle, all-out celebration of Mountaineer Football and a deservedly lighthearted coda to what has been a maddening regular season.

I don't care who you're playing, a 7 touchdown win over a conference foe is something to be pretty dadgum happy about. While you probably looked at that 1-10 record Kansas brought into Milan Puskar Stadium and felt the drubbing was nothing notable, I'll take a moment to remind you that Kansas stayed within six points of Oklahoma State (held them to 20 points, 20!), took Texas Tech to overtime and lost to Texas by only 4. Was this a good team? No. But it was far from the type of fringe-league basement dweller normally associated with such one-sided scores.

WVU was just that good on Saturday. Let's talk about it.

The most yards since the Baylor score-gasm (647) and a quarterback who didn't throw an incompletion, going 23 for 24 with one interception. I've never even heard of that before. Aside from that the Mountaineers simply marched up and down the field at will. There was no overwhelming turnover margin as the Mountaineers only managed a single takeaway and never started any drives on the Kansas side of the field. The nine scoring drives averaged 72 yards and the only Geno Smith led drive that didn't end in points was that lone interception.

Geno hit 400 yards (407 to be exact) as Stedman Bailey and Tavon Austin each broke 100 receiving. Andrew Buie hit the century mark on the nose as The Big Back Shawne Alston rumbled for a pair of scores and 40 more yards. Mountaineers singing their swan songs made up nearly all of the scoring with Austin, Alston, J.D. Woods and yes, Stedman Bailey (any doubt that we were watching his finale disappeared with a prepared scoreboard tribute in the fourth quarter) finding the end zone. Buie and Dustin Garrison were the only returners to find paydirt.

It was a balanced, effective, unstoppable machine of yard-gaining efficiency. If there would have been a better way to say goodbye to the most offensively productive class in Mountaineer history (I'm including Stedman here) I can't imagine what it would have been. It was perfection.

I could talk about how a supposed offensive genius found himself going against the worst major college football pass defense of the last decade and elected to employ the option, but that would take away from the sheer joy of seeing a dominant defensive performance. They got beat on one long play all game - ONE!! In a season where we saw this team score 30 and lose as many times in two months as the previous two decades, I'll take it.

A perfectly pedestrian effort that had not one notable thing about it. And in this holiday season, that earns you an A. Bitancurt nailed every kick, nobody muffed a kickoff or punt and they generally received the ball cleanly and got out of the way to let the offense do their thing. With that offensive effectiveness punting was a non-factor. Kansas didn't notch any big returns or do anything to give them hope. Again - I'll take that effort every single week and will gladly hand out an A.

If you've read the previous 600 words there's nothing I can add here. Play calling was perfect as no drive stalled until Geno was celebrating on the sidelines. The defense was never out of position - the Jayhawk's one big play came on a perfect pass. There was never a point during the game that I found myself concerned about anything other than having enough beer left in my cooler for the postgame tailgate. A welcome feeling to have.

Now if you'll indulge me a personal moment, I have a couple more grades to hand out:

For reasons steeped in a higher level of brilliance that I can ever hope to understand, some high school buddies of mine elected to apply a theme to this season-ending tailgate, settling on "ugly sweaters." The idea was circulated on email and everyone took a moment out of their week to hit up the local Goodwill (or their parent's closet) and find their finest. 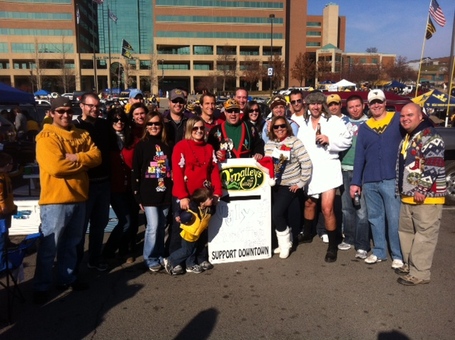 It ended up being a perfectly absurd and completely enjoyable way to end a year that has contained way too many moments of mind-numbing frustration and grumpy endings. Add to it the unseasonably beautiful weather and it was the most fun I'd had at a Mountaineer game in some time. I shared beers with friends I hadn't seen in years and remembered everything I loved about Mountaineer football even before BCS games, title talk, Heisman hopefuls and lofty national rankings. Just enjoying the day with friends and letting the weight of responsibility and adulthood slip away for a few hours.

Big shout-out and thank you to Casey Quinlan, who was the driving force behind the whole thing. I'll definitely see you all next year.

To my buddy Chad, who somehow drew a mental line between an ugly sweater and Cousin Eddie from "National Lampoon's Christmas Vacation," and then committed to the absurdity like few could. Chad showed up to the tailgate dressed like this: 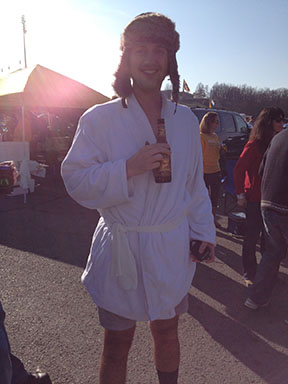 ...and then went into the stadium that way, staying true to the getup through the game and even at Kegler's afterward. Over the course of the entire day, it never once failed to crack me up. When you commit to a bathrobe for a December game, you get graded.

It was at times an awesome year, at times less than awesome, but certainly never boring. We saw the peaks and the valleys of a new conference home that will serve host to many more moments for years to come. I'm always sad to see the end of a regular season but we waved goodbye to this one with about as big a grin as could be imagined.

Quick programming note: ESPN Road Trip was visiting on Saturday afternoon and will actually feature the aforementioned ugly sweater tailgate, among other general WVU pre-game fun. Check it out on ESPNU at 6:30 EST.