Plot: a happily single investment broker, wakes up to a new life where he didn't leave his college girlfriend. The Rundown: This movie plays into the "What if" question. What if you had a second chance? A good mix of drama, comedy, and romance that makes this a decent film. But, if you are only going to watch 1 "What if?" film for the Holiday Season save it for Frank Capra's.

Share All sharing options for: Holiday Classic: The Family Man 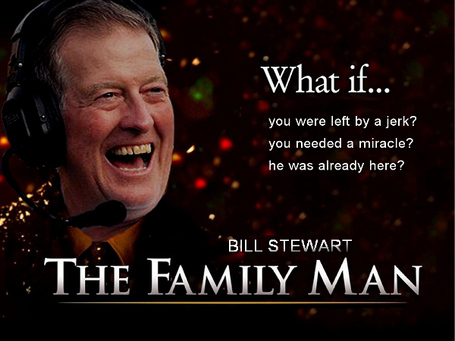 I never met Bill Stewart. That distinct privilege of knowing him closely and personally goes to his family, his dear friends and his players. The only information I ever gained from the man is through media or word of mouth. I would have liked to have had an encounter with him. I would have loved to see that huge smile up close in person as he gave me a genuine handshake. I would have loved to have heard one of his collection of quips come out of his mouth. The ones we were so accustomed to hearing in press conferences and interviews.

When someone passes away, we speak as highly as possible about the person and their time here. With Bill Stewart, you constantly heard those kind remarks time and time again well before his death. "Just the nicest guy" a commentator would say. "He genuinely is the greatest guy in college football." another would exclaim. It was a constant every time his name was brought up. These were not false words. There was no hidden agenda for the media and coaches to spotlight Bill Stewart as a great guy. They spoke so highly of him because in the short time or over the years of knowing the man that is the impression he gave off. It wasn't a gimmick. It wasn't a hoax. Bill Stewart cared about people. He cared about your interests, he cared about your well being. He asked "How are you doing?" not because it was a filler question, but because he wanted for good or for bad to tell him how you were at that moment.

Bill Stewart was a man of principal. You work hard, you do what's right, you pray nightly and good things will happen. Nothing good in this world comes easy, nothing should be taken for granted, appreciation for what you have is life's key to happiness. I remember reading an article saying one of his first coaching gigs he took, it was stipulated that in addition to coaching, he clean the bathrooms as well. That speaks volumes to me. If you have a passion, you follow it. The road won't be easy, but it will be worth it. Stewart's hard work and positive attitude got him to realize his professional dream as the head coach of the West Virginia Mountaineers.

Stewart's personal dream was meet when he married the love of his life Karen and later when they had their son Blane. "the best recruiting job I ever did was when I landed my wife." he self admits. For as much love as he showed to his fellow man I can only imagine that was amplified tenfold with those he truly cherished. The holiday season is a time when you embrace the notion that you get to spend time with your loved ones. I can only imagine how tough it must be for the Stewart family and families everywhere who are coping with the loss of a loved one. The only small bit of comfort I can give is that the reason it hurts so much, the reason the pain is almost unbearable is because they were that good of a person. The only solace I can find is that I know somewhere from above Bill Stewart is looking down, watching over his family and giving them the strength and guidance they need when times are tough.

Bill Stewart was a man of love and compassion. How many times did you see him hug his players, not only when they achieved success but when they needed support. Bill Stewart reached kids not through belittling and cussing but by patience and kind words. He was the type of coach parents wanted their kids to learn from. His knowledge of life far exceeded his football playbook. His strength and leadership is what propelled WVU football during their darkest hour. He was the right man for the job. Few could have kept that team focused and prepared and we were fortunate to have him.

Bill Stewart was a family man. This was evident. He loved his wife. He loved his son. He loved his players and community. He praised his state every chance he got and he was proud of the people in it. He embodied everything good that it stands for. That is the most important impact Bill Stewart had on me. To me, he embodied everything that is good of the Mountain State. In a way, he was West Virgina. And West Virgina is almost heaven...I don't think that's coincidence at all.