Plot: A successful song-and-dance team become romantically involved with a sister act and team up to save the failing Vermont inn of their former commanding general. Rundown: Bing Crosby, Danny Kaye, you can't go wrong. While sometimes you feel the plot is very thin and only written to hold the musical numbers together, it still works. If you want a feel good holiday musical, this is your bet. If you don't ,maybe Die Hard? 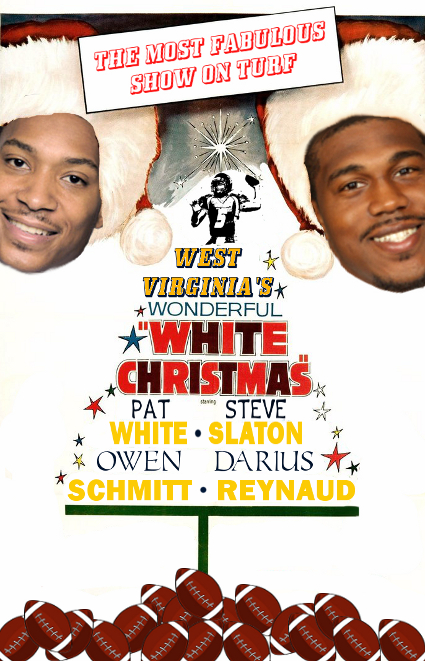 How many players do you know that gained the respect and appreciation from their fan base so much that they changed their teams colors for 1 memorable night to honor ones achievements?

There's not much more I can say about Pat White that hasn't been said before. He was an undoubted leader of the Mountaineer football team during his tenure at WVU. He had so many memorable games and moments throughout his career that it is hard to pinpoint just one.

One that will always hold a place in my heart from Mountaineer greats was his performance in the 2007 Gator Bowl against Georgia Tech. Down by 18 into the 3rd quarter and West Virgina rallied behind White in a gutsy performance to win the game. White did everything that game; he ran past defenders, he ran through defenders, he set up receivers, he even threw a TD pass on a gimmick play where his offensive line just stood there frozen as Georgia Tech jumped off sides. "Just take this play off guys, I got this." I always joked and thought that would've been funny if he told that to his line.

Leading up to the "White Out" game I wondered how Mountaineer fans would dress for the occasion. I can't remember having more fun at a late season tailgate than that special Senior Night. I saw a group of fans wearing white shower robes as they walked passed our tailgate. I saw another group dressed in the white Elvis suits, chugging Natty Lights and laughing like fiends. I saw West Virginian's wearing XXL white T's thrown over their camo gear. I saw fans waiving white bathroom towels around. I saw white headbands, winter hats, face paint. What every you wanted, how ever you wanted as long as it was white.

I don't remember when the snow started that cold crisp night, but I remember thinking to myself how perfect this scene was. As snow was slowly falling over Mountaineer field and the surrounding tailgate areas I took it in for a second. Much like the first time you lay eyes on that view from Coopers Rock or you witness the lighting of Woodburn Hall. Much like a long distance snapshot of the Colesium at night or the view of High Street from frat row, this was a picture perfect moment. Thousands of fans showing their support and appreciation for a Mountaineer who deserved your support and appreciation. There aren't many student athletes like White and there aren't many moments that leave an everlasting imprint on your college memories. Pat White did his best to represent our university and state with pride and class. We did our best to thank him.

There have been a great many QB's that have put on the gold and blue, a great many. We had a pretty good one who is our current AD. We have a pretty darn good one who will be playing at Yankee Stadium in a few days, but anytime I am at Mountaineer Field and I see a snowflake in the air, followed by many, I will immediately be brought back to that senior night where we honored the accomplishments of a leader, The Chief, The Great One...Pat White.