Plot: On Christmas Eve During WW1 a truce is formed between the Germans, French, and Scottish during the brutal war. Rundown:Great movie and touching lessons in humanity. A Christmas gem if you never saw it, I highly recommend it. 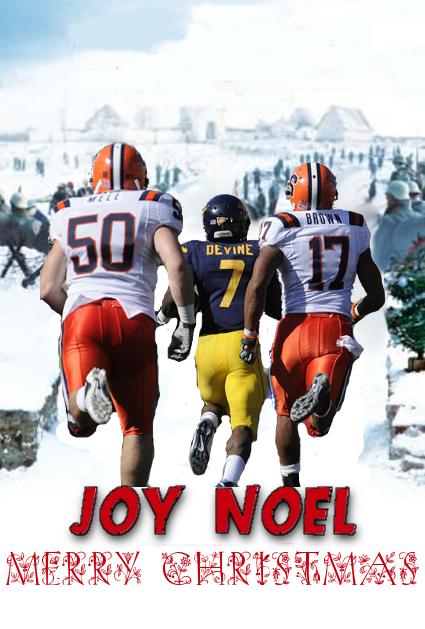 "Hey man check out this guys highlight reel on YouTube. Type in N-O-E-L D-E-V-I-N-E."
"Wow, that's nasty where is he going?"
"He's gotten offers from all over including Nebraska, Alabama, but it's probably between FSU and us."
"Dear lord! we have a legitimate shot at him?!"

That's how I first heard of Noel Devine like so many others who found him on the internet some 7 years ago.

If ever there is an uphill journey of life before you even get to your college years, it is Noel Devine's. Devine went through more pain and tragedy in his teens than most do in life. It is a true testament to his strength as a person that he continues to live a positive life.

Noel came with big expectations and he didn't disappoint. When he made his first touch as a Mountaineer we as fans let him know he made the right decision. A rousing explosion of applause came from the stands to let him know that Morgantown would be his home for the next few year. Basically, we were thanking him for choosing the best football team in the land, In return we would have his back.

As a football player, Devine was a beast. He was a weight room legend. He was so compact and strong that he could still move a pile forward and gain those tough yards. He was conveniently small where he could hide behind the offensive line until he saw his hole and when he saw daylight, he had the speed to go the distance. He was incredibly shifty; arguably the best cut ability a Mountaineer ever had. He was fast in the open field but it was within those first 20 yards where his burst of acceleration was unmatched.

His breakout game against Maryland was an instant classic. His bowl performance against Oklahoma was legendary. He was tough, he worked hard, he had so much athleticism and he was only a true freshman.

I think on the field, the departure of Rich Rod hurt Devine's numbers more than any other player through the transition phase. He was recruited and chose West Virginia based on the success of our running game. He was still extremely effective but his TD total reached only 4 his sophomore season. We saw what he could do with sparse time backing up Slaton and if he was the feature back in a Rich Rod offense, I'm confident his numbers would have been off the chart.

Adversity wasn't new to Devine, with all that he went through already he was not going to let a coaching change get the best of him. Which brings me to my next point. I think off the field, the hire of Coach Stewart was the best possible situation for Devine. We saw Devine grow over the next 3 years under the guidance of Stewart as he continued to astonish us on the grid iron.

Injuries hampered his senior year, which hurt his draft stock, which is the cruel world that is football. One minute you are a YouTube sensation, the next minute you go undrafted. Adversity has always followed Devine, I think it is why I route for him so much. I wish him well in all he encounters in life, and hopefully his time spent at West Virgina served him well as he continues to be a role model to his kids and all that look up to him.

I sometimes find myself defending West Virginia with friends and opposing fans alike for our leniency to take chances on so-called "problem" athletes or bad apples. I take pride in the fact that West Virginia will give you a chance. You might get the opportunity based solely on your athletic skills, but you won't succeed unless you put in the work on and off the field. I always point to Noel Devine's story and how proud we are of his time as a student athlete at WVU. How everything about his upbringing points to the conclusion that he would be a "problem" student and how he couldn't have proved the doubters more wrong. They'll usually argue, "Yea, but for all of those questionable recruits WVU takes a chance on, most do prove to be problems and there are only a few like Noel Devine." I have to correct them immediately, "There is only 1 Noel Devine."