Plot: Big budget remake of the classic cartoon about a creature named the Grinch intent on stealing Christmas in the land of Who-ville. Rundown: Jim Carrey gives a strong performance as the Grinch. The sets are elaborate and the makeup design is impressive. Dr Seuss adaptations are challenging to turn into feature length films. Where the cartoon succeeds with its simplicity and strong message in its 1/2 hour run-time the feature length film fails. I was never a big fan of the back story of the origin of the Grinch, but Jim Carrey's charm and physical comedy more than make up for the lack of a script.

Share All sharing options for: Holiday Classic- "How the Product Stole Christmas" 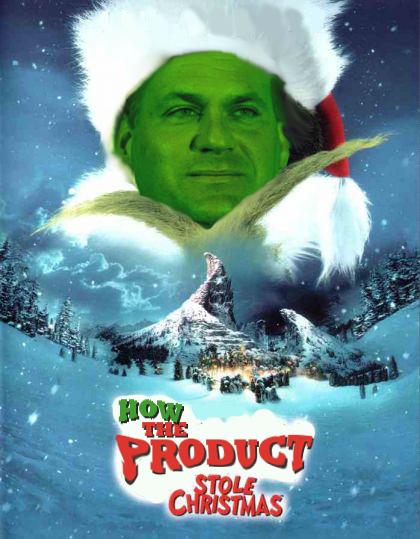 He had it all: head football coach of his beloved alma mater; a community of fans who respected and admired his underdog mentality and blue collar work ethic; a beautiful family he could raise right here in one of the best small towns in America; a program on the rise; the best backfield in the nation; a night game in Morgantown; the 100th edition of the Backyard Brawl and a chance to take WVU to the promise land. What went wrong?

I can only speculate why things turned so quickly after that bitter cold night in December that ripped the heart out of West Virginia fans everywhere. I can only speculate that things behind the curtain weren't as peachy keen as one would expect from a head coach and his athletic department as they were working to build a stronger football program. I can only speculate that absolute control, money, and unlimited access to facility upgrades were the Product's reasons for leaving his beloved Mountaineers. I can speculate that his decision to leave Morgantown was a tough one. I expect he realized that his action would have a re-action but, I wonder in hindsight what his regrets, if any, are? And how he would have handled it given a second chance?

We all have regrets. We all make mistakes. Rich Rod's was glorified. He was a man who stood for West Virginia and our football program. When he left us, it wasn't business as usual, it was personal. When you get to that level of coaching, when you are running a Div.1 football program you are asking your fan base and university to buy in. "Believe in my style, my techniques, my on and off field actions." The good ones are beloved and the bad ones are run out of town. With Rich Rod, we were buying in. Yes, there were better coaches out there, but with Rich Rod we were competing for conference titles year in and year out, our road to a BCS was easier than most, and given the year it was possible for a Big East undefeated to sneak into the Championship game. I don't think anyone imagined a Big East one loss team could get into the Championship game but, that my friend is why you play the entire season.

Rich Rod had his chance. He had his opportunity to leave his mark in WVU football glory. He definitely left his mark, but in a different fashion. He did some great things here. He also did some asinine things here. All we are left with are memories and what could-have-beens. It's comical looking back to that dreadful night to see how things have changed since then. We were in the Big East and Rich bolted for the Big 10. We jumped to the Big 12 and Richy Boy is now in the Pac-12. From mountains to cacti. We ran the ball with Rich and only threw when necessary and now we are breaking insane passing records. Rich is winning thrillers in a meaningless New Mexico bowl and we are heading to Yankee Stadium. And all of this is in direct correlation to us not being able to muster up 14 points on that fateful December night.

Are we better off without Rich? I'd like to think so. As I grow older there a few things I continue to realize:
1. God willing, West Virginia Football will continue.
2. Hating someone or wishing failure upon another over a sport does not make me sleep sound at night.

Rich Rod's character was put in the spotlight after his departure from his home team. I don't respect the way he handled the situation and he didn't gain any points in the trust category, but I don't hate a man for making a business decision.

West Virginia will continue to win football games and one day a National Championship, and when they do, it will be under the guidance of a coach who wants to be here, not someone we wish was still here.

I never understood "forgive and forget." I'm more of a "forgive and don't forget" kind of man. While I think Rich Rod's actions to his beloved alma mater can one day be truly forgiven, they will never be forgotten. Given it's Christmas time, if Rich Rod would ever come back to his home state I hope he would be forgiven and accepted... just don't expect any presents under the tree from the locals. Actually it is West Virgina, we have a lot of coal.