As we get closer to conference play, we shall take a look into what we have seen thus far from the West Virginia University Basketball Mountaineers including analysis of The IstanBull and WVU's chances at the Big Dance. Plus, a very important tradition, after being in danger of discontinuing, is finally upheld another year.

Happy Holidays, By-Godders! I am aware of the tradition of egg nog being the usual go-to this time of year for adult beverages, but Santa and I are sticking to our guns on this smooth and fulfilling choice of Hurricane. After watching the Oakland game and having a little confidence restored in defending home court, there are still major questions to be asked. Let's do this.

1. Deniz Kilicli: The Debate Rages On

A lot has been made as of a recent tweet from @MikeCasazza, Charleston beat writer for WVU athletics. 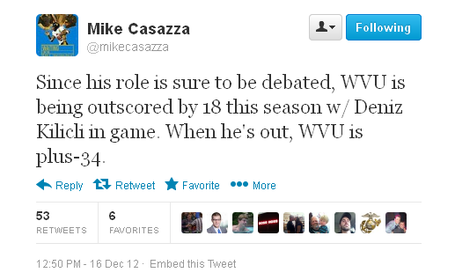 This +/- (plus/minus) stat is mostly used in the NBA and is very much familiar with hockey fans. Regardless of sport, it adds up the amount of points (or goals) that are engineered and subtracts the amount that are scored on your team while you are in play. Currently, Deniz is -18 on the season. However, this is not on par to his career +/- numbers... 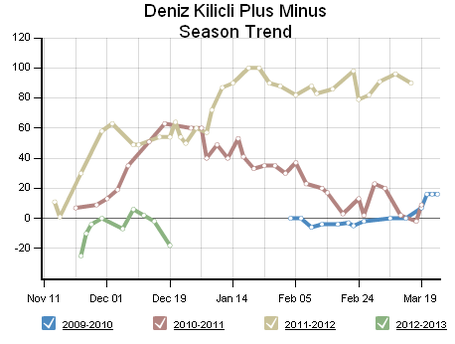 As the chart shows, last year, Kilicli reached career high +100 numbers being extremely effective on both sides of the court. It's also worth noting that Deniz was scoring around 12 points/game last year, so he was contributing to those numbers offensively. However, having arguably the best player in the Big East in Kevin Jones sharing the paint with you sure makes things a lot easier. A lot of the frustration comes from him simply not making the shots that he usually makes. Easy buckets in the paint that bounce out have caused his annual FG percentages of (2009) 50.4%, (2010) 48.6%, and (2011) 51.2% end up being 38% for this year thus far.

All this being said, the WVU offense slows when he is on the court. It almost seems that the players feel obligated to give the big senior the ball on the post. This is probably the Huggins strategy to try to get easy buckets with what should be great post play, but Kilicli has not been producing. While the coach said in the post game interview following Oakland that Deniz provides a much better skill set compared to Rutledge (mid range jumper, size, rebounding), these attributes have not been translating on the court. Too many times does the cross-court pass get picked off or the ball is stolen on the post while drop-stepping. Until the IstanBull starts playing like a 6-9, 260lbs man, WVU will suffer while he is in the game.

2. WVU is A Bubble Team At Best

As always, the major aim for any college basketball program is to make the tournament.... the real one. There some major credentials to making the big dance and considering WVU doesn't quite look like a Big XII Champion, let's go over the résumé for an at-large spot. First, RPI and SOS:

The SOS is really saving us, but VT seriously screwed any resemblance of a true quality win with their stumble against Georgia Southern in Blacksburg, 78-73. That being said, the last major nonconference game is against in West Lafayette against the Boilermakers of Purdue on Jan. 16, but they are 5-6 right now and facing a triple digit RPI. A very key point to remember is, for bubble teams, you should win a majority of your nonconference games along with about .500 or better in conference. WVU has had plenty of opportunities to make their and our heart rates much more calm in March, but never came away with wins. Now, the Big XII schedule is going to be extremely important along with the next two games against Radford and Eastern Kentucky that are must-wins. If the Mountaineers end the season with sub .500 conference record with their already lackluster record after ten games, then they will be waiting on the NIT invitation, not the NCAA.

Long live the king. I was worried there for a bit that we were going to return to the dark ages of the 1990s, but the 15-year streak continues to 16 with the excellent work by Robert Gillespie to sign Dreamius Smith. I am, of course, referring to the continuation of the Smith surname being donned on the back of a Mountaineer jersey. We had some rough years, the Smith clan, failing to find an athlete that would represent the family crest with pride. During most of that time, I had to represent my cousins Emmitt and Bruce even though one of them was a Chokie. However, since 1998, there has been at least one Smith on the roster including some rather notable. 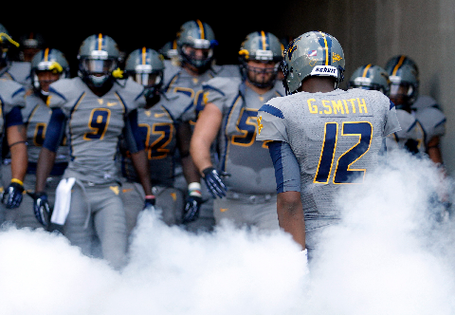 Of recent years, Geno, Eain, Corey, and Larry (Lawrence) have been holding down the fort with a four Smiths during both 2010 and 2011. I have been keeping a close track on this trend.

Of course, being the scholar I am, we must keep an eye on the number of wins to check for correlation.

Doesn't seem to be a correlation.... yet. We Smiths expect Dreamius to start setting the course for future Smittys around Mountaineer Nation to reign alpha-surname and bring us to the promised land yet again.