WVU - Oakland Preview: Not "That" Oakland

The West Virginia University men's basketball team return to the Oliver Garden to get back on the winning side of things against the Oakland Golden Grizzlies.

Share All sharing options for: WVU - Oakland Preview: Not "That" Oakland

Well, I guess Bruce Pearl has nothing else to do other than bro out with his boy Greg Kampe.

Bruce Pearl isn't exactly wrong. This is a good time to catch WVU after losing two straight and the students being out for break. That video also gives a little insight to the mindset of a mid-major basketball team. They need to pick off as many road wins against major conference schools and then win their conference tournament to get into March Madness. With that, if you look at their schedule, it's absolute hilarious. 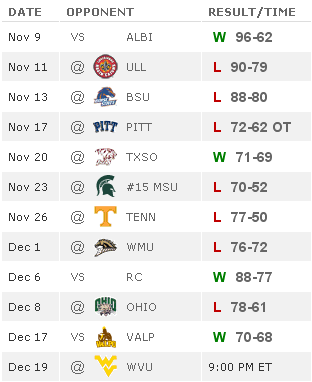 I haven't seen that many @ symbols outside of Twitter in a long time. Also worth nothing is that they are starting to run out of opportunities for a key win before conference play comes up, so they want this one. For many of the same reasons, WVU is still searching for another major non-conference win that Huggs can reference when bubble talk starts. We won't find that win here (see: January 19th), but it's just equally important to defend the Coliseum.

To have an adequate tournament resume, you must knock off a few big boys while beating the teams you're supposed to beat.... especially at home. It really doesn't matter how you do it (take a note of that @Pitt game on their schedule), as long as that green W is on the list, it doesn't count against you. With the way the Mountaineers have looked the past two games, it's starting to look like WVU is going to have to make each non-conference game from here on out an extreme priority. Wednesday night against Oakland is the first of a nice home stretch against the Golden Grizzlies, Radford, Eastern Kentucky, and rounding off with the first conference game against the Sooners on January 5. It is crucial that the Mountaineers have a three game winning streak heading into that OU game for countless reasons. None of us want to see Oakland, Radford, or Eastern Kentucky joining Davidson and Duquesne on the list of "key losses" come Selection Sunday. It's time to put on the ass-kicking boots and get us a few wins starting with Oakland.

WVU vs. Oakland, Not "That" Oakland