Plot: A misfit reindeer and his friends look for a place that will accept them. The Rundown: One of my favorite holiday classics. It seems to get better with age. Somehow the clay-mation used to film this movie gives it a nostalgic feel that will never grow old or seem too outdated. Memorable Characters across the board.. A reindeer you love, a charming elf, and softhearted villain who learns the error of his ways. A Classic tale that proves no matter how different you are, there is a place for you in this world where you can showcase your talents and be loved. 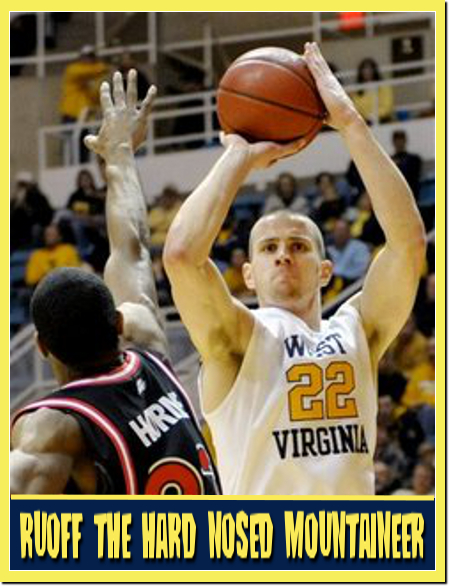 "Rouff the Hardnosed Mountaineer
Never had a lot to say
But if you ever saw him (saw him)
You would say he sure can play
All of the Big East Haters, use to laugh and call him names (like Can't-Make-A-Shot)
They never gave poor Ruoff, (Ruoff) any love in all his BBall games.
Then one Foggy Coliseum night, Huggy came to say. (Ho Ho Ho)
Ruoff with your J so tight, won't you guide my team tonight.
Then all the haters shut up (shut up) as they shouted out with Glee
Ruoff the hardnosed Mountaineer, you'll go down in Hiiisstttooorrrryyy! (like Jerry West)

(Ok, not like Jerry West, but thanks for all you've done and we sure could use a pure shooter on this years team.)

So what is going on with this years team? To stay on topic they seem like the island of misfit toys. They all have talents and athleticism but they can't play together. Just like the football season was defined as a team that could not stop the pass for the life of them, I fear this team is being defined as a team that just can't put the ball in the hoop on a consistent basis. We don't have to be known as a team who takes countless 3's anywhere on the court, but we do have to knock down open shots and we do have to make some long range 3's to keep the Defenses honest.

We played Michigan on Saturday, they are ranked #3 in the country and they are led by our previous coach. His teams can shoot. His teams take a lot of 3 point shoots with confidence. His teams put the ball in the hole. Currently Michigan is 7th overall in Field goal percentage. They make open shots.

Learn from the people in the program who can shot. You can't teach athleticism, which we have, but you can teach fundamentals, proper technique and game IQ. We haven't given up on you. you just have to prove to us that you want it.

And to make this post a little more lighthearted and merry...my favorite rendition of Rudolph the Red Nosed Reindeer sung only like a true artist can: