The West Virginia University men's basketball team make their way into the House that Jay-Z Built against the #3 Michigan Wolverines coached by the former old-lady John Beilein.

Share All sharing options for: WVU - Michigan Preview: No Sleep Till Brooklyn

Hail to those AUTOWORKERS

Hail to those CIRCLE JERKERS

The Cesspool of the West

Also, just because I appreciate the fact that all of OSU nation embraces this lil tune...

The stats for UofM look to be about what you would expect from a Beilein team. They shoot 50% from the field, 40% from beyond the arc, 73% from the free throw line, and consistently get outrebounded. I will not be the first to draw parallels between his WVU teams and this one, but this 10-0 run isn't unlike the the same 10 win run he had with the Mountaineers. Plus, they beat Pitt 67-62 along the way.... so that's cool.

While the Wolverines have four guys that come off the bench regularly, the starters drive this team and Trey Burke is given the keys. He leads the team in both points and assists only as a Sophomore. Nik Stauskas, a Canadian (shown below), is the sharp shooter for Michigan averaging 59% from three. 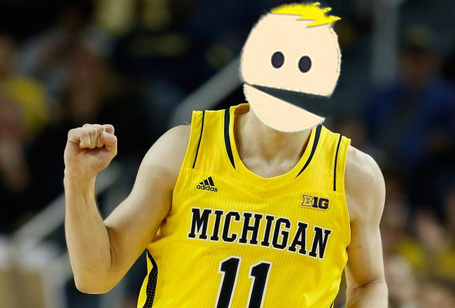 We all know how Beilein teams can be beaten: a bad shooting night. Although most of that is just the luck of basketball, a lot of it has to do with getting hands in the shooter's face while GUARDING THE BACK DOOR. Michigan is well-disciplined and has fantastic ball movement. Stingy defense that lasts the whole shot clocks is what you need to do to beat these guys while creating turnovers so the Mountaineers don't have to get into their unorganized half-court offense. West Virginia can beat these guys..... but it's going to take bringing the A+++ game to do it.